The Bundesliga is famed for its impressive, modern stadia- in part a legacy of the 2006 World Cup held in Germany. However, some of the biggest and best sides in the league have a longer tradition and some of their past glories were played out in quite different arenas. In this series we take a look at some of the iconic stadiums of yesteryear and relive history. First up…Borussia Dortmund.

Dortmund’s Signal Iduna Park home (or the Westfalenstadion as those averse to the sponsor induced name still refer to it) is a mecca of German football and a truly modern football theatre with its vast yellow wall of the Südtribune. However, if today you approach the stadium from the Westfalen Stadion U-Bahn station, you will see the club’s former spiritual home dwarfed in the shadows of the immense structure that is today’s stadium- the Stadion Rote Erde.

BVB only moved into their current home in 1974 when the stadium was one of the new constructions for the World Cup of the same year. Strangely enough Dortmund had not been one of the original venues and only received the funding to construct the Westfalenstadion after Cologne pulled out of hosting in 1971.

Formed in 1909, the club’s first home was the Weisse Wiese (the white field) a municipal field so named due to the flowers that would blow down from the surrounding trees carpeting the pitch in white petals.

Then in 1937, with Germany preparing for war, the expansion of the Hoesch AG steel factory next door forced the club to up sticks and move to the Stadion Rote Erde (the red earth stadium). Oddly the first match ever played at the stadium in 1929 had seen local rivals Schalke defeated 4-1 by Hertha Berlin in the quarter-finals of the German Championship!

The origin of the stadium’s name is not a great mystery and provides a strong link to the region’s mining heritage. The red coloured earth being due to the red iron basin of the mighty Ruhr River. Also, with a strong communist presence at the club due to the huge influx of immigrant workers to the mining industry, the club were more that content with the ‘red earth’ analogy at the time.

Indeed groundsman Heinrich Czerkus was a committed socialist and became an active member of the resistance to the Nazis. Sadly, he was finally arrested in 1945 and murdered along with hundreds of others in the Rombergpark not far from the stadium. 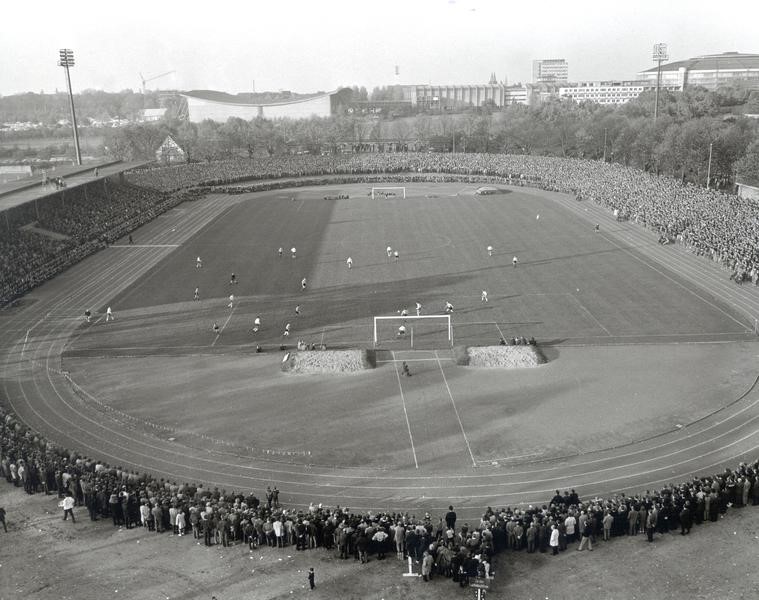 Indeed perhaps the greatest night was witnessed in December 1963 when they faced the might of Benfica in the European Cup trailing 2-1 from the first-leg in Lisbon.  In front of 40,000 fans Dortmund thumped the Portuguese giants 5-0 with Franz Brungs hitting a hat-trick- this being the same Benfica that had won the trophy in 1962 and reached the final in 1963.

Club legend Alfred ‘Aki’ Schmidt played that night and has fond memories of the club’s former stadium. “Despite the dirt track, spectators were always close to the field. The club had to put benches on the dirt tracks, on which people sat just half a meter away from me when I had to take a corner. People were always whispering to me how I should hit the ball.”

It soon became clear that the club had perhaps outgrown their home with its capacity of 40,000 and plans were put into action to bring about a new, bigger arena-today’s Westfalenstadion. Nowadays the 10,000 capacity stadium plays host to Borussia Dortmund II in the Regionalliga (IV), but to those with a long enough memory, the ghosts of past glories remain.

Sitting in the shadow of the Signal-Iduna Park, is a large piece of the club’s identity and where they used to play.

Prior to the start of the Bundesliga season, many predicted Giovanni Reyna would have a breakout season following his promising performances in the Bundesliga restart. However, the 17-year old budding superstar is off to an […]

Can We Talk About THAT Penalty?

The Bundesliga’s top game on Saturday saw Borussia Dortmund come away from the Deutsche Bank Stadion with all three points after a 2-1 win over Eintracht Frankfurt. Goals from Julian Brandt and Jude Bellingham either […]