There are plenty of fierce rivalries in the Bundesliga and sometimes matches can be feisty occasions. However, nothing comes close to the most-dirty league match ever witnessed when Borussia Dortmund and Bayern Munich went head-to-head in 2001.

History books teach that the Peace of Westphalia was signed in 1648 to end the 30 Years War, but Dortmund and Bayern were certainly in no mood for peace when they met on matchday 28 of the 2000-01 season.

With seven games left of the season, reigning champions Bayern led rivals Borussia Dortmund by a single point with Schalke, Bayer Leverkusen, Hertha Berlin and Kaiserslautern all three points behind. The clash earlier in the season at the Olympiastadion had seen Bayern triumph 6-2 so Dortmund were obviously looking for both points and revenge.

Ottmar Hitzfeld’s side had travelled to England in midweek where they came away from Old Trafford with a vital 1-0 win their Champions League quarter final first-leg tie against Manchester United, so confidence was high, but fatigue was in the back of many people’s minds.

The previous weekend they had surprisingly lost 3-2 at home to Werder Bremen with future player Claudio Pizarro scoring twice. Dortmund, after losing at home to Leverkusen on matchday 26, had beaten Kaiserslautern on matchday 27 to keep up the pressure on Bayern.

The extremely close nature of the title race meant that an already tense game was given added pressure and it seemed like a powder keg ready to explode.

Bayern lit the touch paper in the 6th minute when Roque Santa Cruz fired the ball past Jens Lehmann after Bixente Lizarazu’s great run and cross from the bye-line. Referee Hartmut Strampe dished out the first yellow card on 16 minutes to Sammy Kuffour, but his cards were not going to stay in his top pocket for long as a bad-tempered match threatened to get out of control.

Otto Addo, Sunday Oliseh, Bixente Lizarazu, Giovane Elber, Jens Jeremies and Thomas Linke were all cautioned, but things took a turn for the worse for Bayern when French fullback Lizarazu was cautioned for a second time on 35 minutes for pulling back Tomáš Rosický as he charged up the right. Bayern were down to ten men.

The start of the second half couldn’t have gone better for the hosts as they came flying out of the blocks. The Schwarzgelben had two goals ruled out for offside within the first five minutes (Bobic wrongly/ Dédé correctly), but then finally grabbed the equaliser on 56 minutes when Fredi Bobic got ahead of Kuffour to steer home a right wing cross from Lars Ricken.

A minute later Stefan Effenberg was booked for complaining before he then saw a straight red for a body check on Evanilson. I say body check, but it would have been more suited to an NHL ice hockey rink than a football pitch.

Not content with a red card, Effenberg launched the ball into the air before walking off blowing kisses to the BVB fans. The midfielder needed umbrellas to be held over him to protect him from the missiles launched at him.

The drama wasn’t finished there as Giovane Elber had the ball in the back of the net on 65 minutes only to have it ruled out for a handball, while Oliseh smashed the ball against Oliver Kahn’s crossbar from 18 meters. 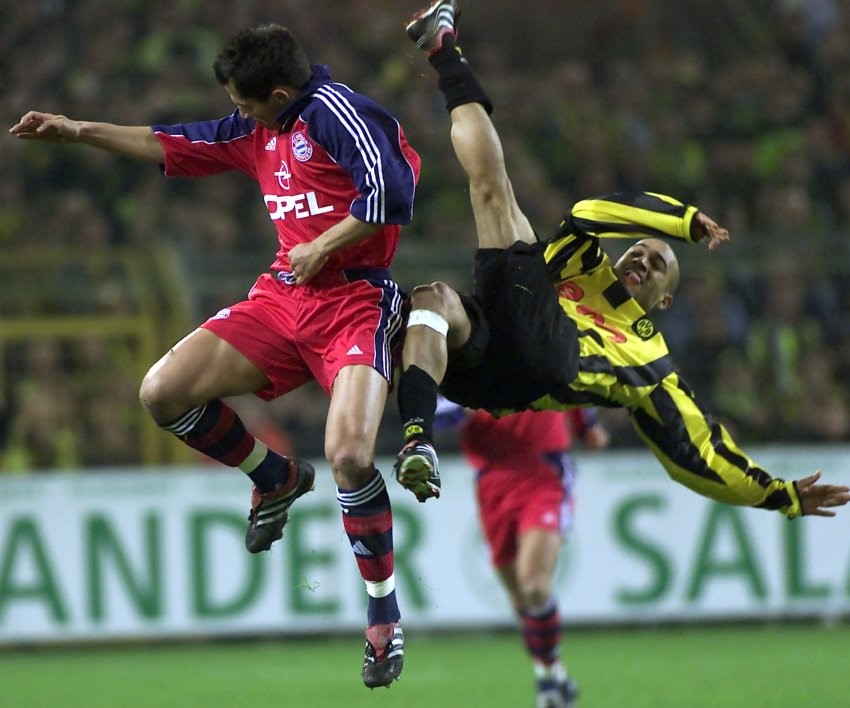 Matthias Sammer’s side thought they had snatched a dramatic win in the final minute when Rosický curled a delicious free-kick over the Bayern wall with Kahn left a mere spectator. The old ‘Bayern Dusel’ was in effect though as it agonisingly came of the post, and rolled into the grateful hands of the keeper.

There was even time for BVB’s Evanilson to be sent off with a straight red card following a horrible tackle on Bayern substitute Paulo Sergio. In all referee Hartmut Strampe showed ten yellow cards, one yellow/red, and two straight reds over the course of the game. Of Bayern’s starting XI, only Patrik Andersson and Roque Santa Cruz weren’t cautioned.

In the end a 1-1 draw suited Bayern more than Dortmund, but the match official Hartmut Strampe must have had a severe case of repetitive strain injury after having to keep getting his red and yellow cards in and out of his pocket.

Bayern President Uli Hoeness was predictably apoplectic after the game and didn’t hold back on his criticism of both the referee and Dortmund’s players.

“For a top game, you need a top referee, and Strampe is certainly not that” he fumed at the final whistle. “I have never seen a game in which the referee made so many mistakes from the 1st minute to the 94th. He made over fifty mistakes today.”

He was equally disparaging about Dortmund’s Otto Addo, whose theatrics he claimed were to blame for getting his Bayern players booked- “he belongs in the circus” Hoeness screamed as he left the pitch.

BVB Sporting manager Michael Zorc hit back later saying, “That’s an incredible cheek. The game in Manchester seems to have clouded their senses.”

In the end Bayern left the Westfalenstadion with a point and the title race went down to its now famous decider on the last weekend, when Schalke were Meister for all of four minutes.

There have been and will be many Klassiker between Borussia Dortmund and Bayern Munich, but few have provided as much controversy as the 2001 Battle of Westfalen.

Bayern Munich’s 7-0 demolition of Bochum at the weekend saw a host of fine performances and stand-out players. One player definitely in contention to be deemed the Player of the Match was Leroy Sané, who […]