The normal season may have ground to a halt as a result of the Corona virus crisis, but Hertha Berlin have continued to make the headlines (for all the wrong reasons) off the field, seemingly lurching from one ridiculous incident to the next with startling regularity.

From their laughable dalliance with Jürgen Klinsmann, player indiscipline during lockdown, to their recent appointment of Jens Lehmann to the supervisory board, Hertha are becoming the Bundesliga joke that just keeps giving.

The admirable intention of investor Lars Windhorst to turn the capital club from under-achievers to a Bundesliga/ European force kicked off with his buying a 49.9% stake in the Old Lady for €224m. In a headline-grabbing move intended to reinforce his stated intention, former Nationalmannschaft and Bayern Munich coach Jürgen Klinsmann was brought in.

Initially it was intended that he would join the board as an advisor and representative for the club, but this didn’t come to pass because Klinsmann was parachuted in as interim trainer in November following Hertha’s struggles under Ante Čović.

The club then spent a sizeable chunk of Lars Windhorst’s investment in the January transfer window- €77 million on four players: Santiago Ascacibar, Matheus Cunha, Krzysztof Piątek and Lucas Tousart (although he was inexplicably loaned straight back).

So far, so promising, but then after just 76 days at the club, with three defeats, three draws and three wins in the Bundesliga Klinsmann was gone. 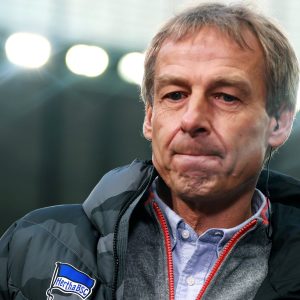 The 1990 World Cup winner bizarrely quit in a Facebook post citing “a lack of support”, before holding a live chat to expand on his reasoning. “The whole thing has nothing to do with money at all,” the 55-year-old said. “It was a matter of clear division of competencies, and we did not manage to do that. It primarily affects me and Michael Preetz.”

Klinsmann wanted to work as a trainer in the English manner and found it “unbelievable that the manager is still sitting there and giving his comments to the players or the referees”.

Not to worry, Klinsmann’s successor would surely be the man to do what was needed. Two words: Bruno Labbadia.

No sooner had the Klinsmann headlines died down than the Corona virus crisis hit. Surely a modicum of calm would come over the Olympiastadion. Not so. Ivorian winger Salomon Kalou caused a huge uproar by deciding to record and then publish a video taken at the club showing him brazenly flouting the social distancing rules. In the video he is seen shaking hands, giving high-fives, and even bursting into another player’s Covid-19 test.

The 34-year-old has been suspended until the end of the season and considering his contract is up at the end of the campaign, looks to have played his final game for the club.

“Salomon Kalou has given the impression in his video that the Hertha BSC players do not take the social distancing and hygiene rules seriously on the part of the health authorities,” a statement on the club’s website read.

“Hertha BSC would like to state that this was the failure of a single player. The fact that other team members did not draw his attention to this misconduct and instead replied to the greeting by shaking hands shows that the regular references to the distance and hygiene rules must be even more intense.”

The choice of the former Schalke, Dortmund and Arsenal goalkeeper has baffled many observers (but not those growing accustomed to baffling developments at Hertha).

“I gladly accepted Lars Windhorst’s offer to help with Hertha Berlin’s continued development,” the 50-year-old Lehmann was quoted as saying in a statement from Windhorst’s Tennor-Group. “I see it as one of the most interesting projects in soccer.”

‘Interesting’ is one word to describe the goings on in Berlin right now. Lehmann brings very little (if any) experience beyond his playing days and seemingly only brings unwanted headlines.

Shortly before the club announced his appointment, he had come out on social media playing down the dangers of Corona virus to players returning to Bundesliga action.

“As long as the symptoms are not that bad, I think players have to cope with it” he told beIN. “We have plenty of players who were actually infected, and most of them did not even show any symptoms.

“So, I think for young, healthy, people with a strong immune system it’s not such a big concern.”

Thanks Doctor Lehmann. Just what will be next bizarre twist to come out of Hertha?

Since their promotion to the Bundesliga in 2019, the rivalry between Union Berlin and Hertha Berlin has intensified greatly. Both teams gained important wins last season on the pitch, but this season has seen the […]