It’s a conundrum. I get it!

As an avid sports fan, the absence of competitive sports during this coronavirus pandemic has left a void in your life that no amount of Netflix binge-ing can fulfill, even when supplemented with sports documentaries and archival match footage. This weekend’s return of the Bundesliga promises to bring some of what is missing back into your day-to-day, except that you know very little about the German league and its member clubs!

Under normal circumstances, you’d be fine just watching it casually, but under normal circumstances you were not necessarily compelled to watch the Bundesliga in the first place, which is how we got here, isn’t it? If this is going to be your only major sports outlet for a little while, you want to have a stake in it! Sure, you could place some wagers to give yourself rooting interests, but it’s not quite the same as rooting for your team.

And this is why social media has recently been flooded with offers of help from people who do follow the league. Some have simply said, “ask me and I will answer,” while others have compiled methodologies for how to choose your brand new favorite German club.

Normally, this would be the advice I’d want to dispense. It is the most-natural way to come to a club. In fact, I can’t even imagine someone having passion for a club based on anything else.

But I do recognize this comes from a position with a certain amount of privilege, too. I had many mornings feeding a baby in front of the TV early on weekend mornings to allow my wife to get a little extra sleep she was not getting at almost any other time when my firstborn was an infant. Eventually, I just realized that I was more-invested in one team’s fate each weekend than I was in any others.

And as a football romantic, I believe that’s precisely how it must be done.

However, this is not a time for romance, is it?

We are not talking courtship and mating rituals with hopes of leading to a long and healthy relationship and maybe even marriage! This situation calls for a classic Vegas quick-and-dirty. You want to marry it? Great! Hit the drive-thru marriage chapel with your blushing bride and don’t forget to request the Elvis impersonator to do the honors.

Your true love is away and not returning for at least a little while now. While you have this undeniable itch, you’re being presented with an opportunity here. For nine matches, it can be whatever you want it to be, but there is urgency in finding your partner, because the ball rolls this weekend. You can never be sure what you’re getting yourself into when you’re making decisions when the bar lights come on, but that’s can’t always be a bad thing, can it?

And once you’ve picked, you can pretend it’s true love, you can openly treat it like a one-night stand, or you can do anything in between.

But it starts with a choice.

You’ve probably seen them floating around social media, if you’ve been poking around English-language Bundesliga news lately. You get a little humor and a visual, which seems to me to be the basis of decent social-media content.

I, in fact, saw two “which Bundesliga team should I follow” flow charts today that were completely new to me. One actually came from the league’s English-language website!

As you might imagine, this would be the most-politically correct flow chart on the topic you’re likely to find. The league can’t really take sides, which means there are no barbs here, which frankly means that it doesn’t really travel into the same terrain fans like to travel with discussing the relative value of clubs.

It is worth noting that the first question is about the importance of winning. Sports is, after all, a results-based business. Of course, everybody likes to win, so it’s not as if someone is looking for a club who could lose all nine of their remaining fixtures. But the matter here is, how important is it to you and your happiness that your club win? Like NOW?!

It’s telling that if you choose “yes” to the question, you are already down to three of the 18 clubs in the league & you probably have heard of at least two of them as well as the third’s beverage.

I also believe the question on the bottom right features an error. Paderborn should probably be the “No” option for “Does relegation fill you with a sense of dread” for reasons that should be obvious if you look at the table. Maybe it was intended for both to be “yes” and I simply don’t get the gag. Who knows?

Otherwise, the flow chart is full of harmless options. Are you, the Bundesliga newcomer, going to have an opinion on “Political, Hanseatic, or Financial” capital? (Sure, you can ding them for “capital” vs “capitol” if you wish, but let’s get back to the football, eh?) Do you have any idea what “Helau!” or “Alaaf!” might mean? 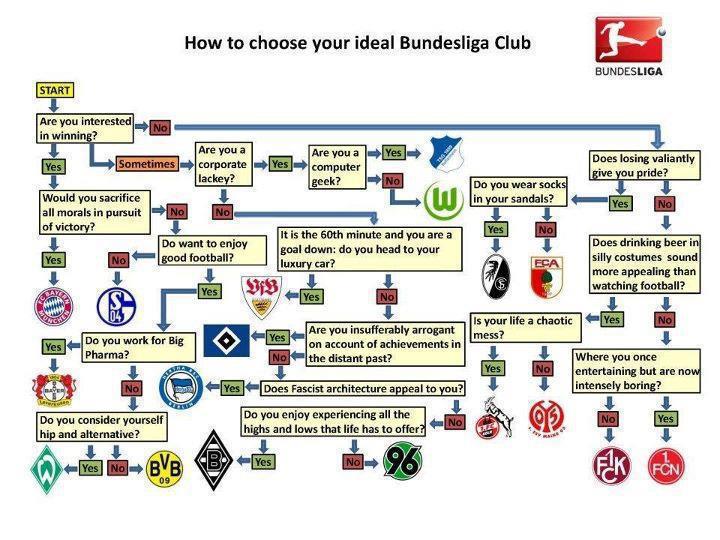 This chart was found in the wild years ago, which is why some of these logos don’t fit your current options, but it was the first one I ever saw for German football, so I thought I’d share it as an example of the difference a fan’s approach might offer. I could spend a lot of time explaining some of these, but I’ll just leave it for your enjoyment, while adding that if you were going to use one or the other, this one hits at more truths than the league’s version.

Plus, if you use the latter version, you can’t end up being a Leipzig supporter, so bonus value!

Before I move on, I will say that “Is your life a chaotic mess?” was a little offensive to me when I first saw this, but after a decade-plus of ups-and-downs with my club . . . I get it. Ouch, but I get it.

In other words, try to wedge a false parallel between two seemingly like things to find a path to a decision.

In theory, this is not the worst way to go about the matter. If you can identify characteristics of a team you support and then learn that a Bundesliga team shares some of those characteristics, then it would make sense to use that connection.

Now, if you’re the type of fan who was a HUGE Chicago Bulls fan during the Jordan era, but then was a Lakers fan for Kobe and/or Shaq, or you were the guy who always yelled “How ’bout them Cowboys” in the 90s before realizing you loved the New England Patriots, then you probably already ordered your Bayern Munich jersey & have been wasting your time reading this (for which I thank you).

Other than that, though, it’s hard to draw those parallels, especially for US sports fans. The differences between how German and US clubs and leagues are run make it really hard to nail genuine similarities. I remember watching an 1. FC Köln fan ask on Twitter for suggestions for an NFL team that would fit with his club’s identity and be referred to about 2/3 of the NFL franchises. And the funny thing was, the explanations for most of them seemed pretty legit! Buffalo Bills! Green Bay Packers! New Orleans Saints!

You can find a connection if you try. You don’t even have to try all that hard. Check out FC Schalke’s Twitter thread that extends a bridge to all 20 English Premier League clubs.

We have a reason for fans of EVERY PL club to support FC Schalke 04 for the remainder of the Bundesliga season! 📝

Granted, some of them are, “you wear blue; we wear blue . . . amirite?”, but that’s just how easy it can be, which means if you wanted to justify a connection to any Bundesliga club based on your existing fandom, you could probably do it.

But that just gets you back to where you have to pick a club in the first place.

If Borussia Dortmund are going to usurp Bayern Munich and claim their first Bundesliga title since 2012, they are possibly going to have to do it without their talismanic captain Marco Reus. The enforced shutdown […]

Werder Bremen face FC Heidenheim in the promotion/ relegation play-off with a place in next season’s Bundesliga at stake. Most people will know about Bremen, their history (56 years of topflight membership, four titles, six […]