The much-awaited return of the Bundesliga from the Corona virus lockdown saw a very different matchday experience than we are used to. One thing that had not changed though was the exquisite skill shown by Borussia Dortmund’s Julian Brandt, who orchestrated a comprehensive 4-0 win in the Revierderby.

As his Borussia side made easy work of beating arch-rivals Schalke in the local derby, it was the 24-year-old who was the stand-out performer for the Schwarzgelben. Let’s take the opportunity to dig a little deeper and analyse the midfielder’s influence.

For the highly anticipated clash with Ruhr rivals Schalke, Lucien Favre kept faith with his 3-4-2-1 formation that had served him so well prior to the Bundesliga suspension. With Jadon Sancho rested on the bench and Giovanni Reyna injured in the pre-match warm-up it was down to Brandt and Thorgan Hazard to provide the creativity behind striker Erling Haaland. 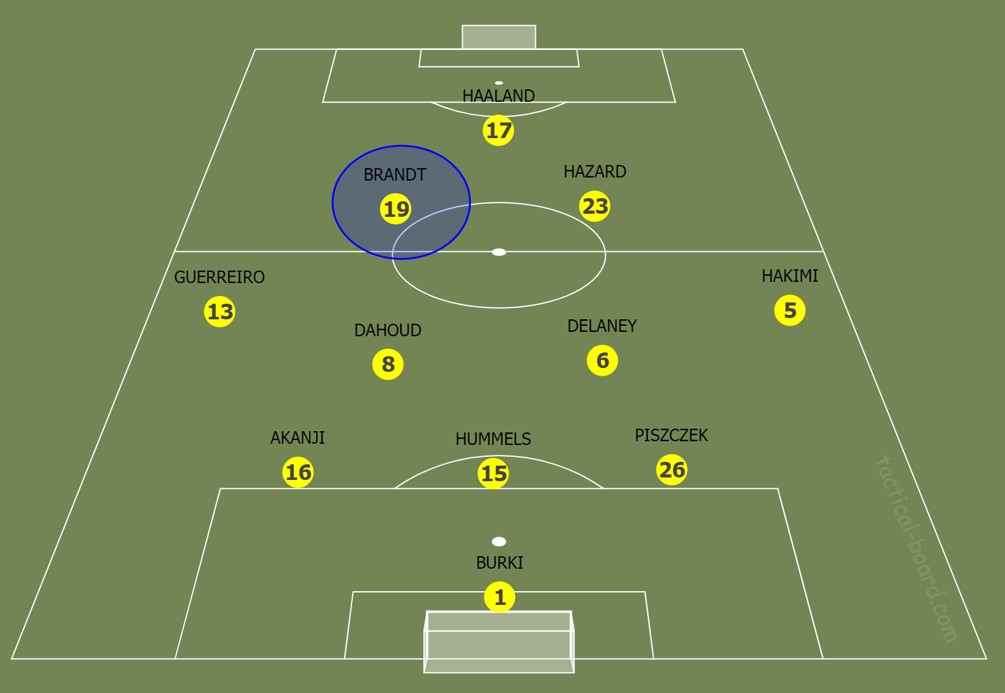 While it took a little while to acclimatise to the atmosphere and the match rhythm, it soon became clear that the ‘home’ side were finding their groove much quicker than a Königsblauen side that looked like they were in a training match.

Brandt found his feet in the game straight away and was a key factor in BVB taking control of the game in the first 45 minutes. He set up Haaland in the 24th minute only for the Norwegian’s shot to hit the side netting. Minutes later he was instrumental in the opening goal when his sublime flick sent Hazard through to set up Haaland.

He then turned provider for the second goal just before half-time and the one that made it 3-0 three minutes after the restart. Both were clinically timed through balls which laid on straightforward chances for Raphael Guerreiro and Thorgan Hazard, respectively.

He even had a role in the team’s fourth goal starting the move from deep in the Dortmund half. There was even an outrageous flick in the 70th minute following a clearance from defence that had a whiff of showboating about it and the sort of audacity you would normally associate with Neymar.

All-in-all Brandt bossed the game and in the absence of Jadon Sancho and Marco Reus, he revelled in his role as the team’s creator and main orchestrator.

The Tale of the Tape

In a match where five substitutes were permitted, Brandt played the entire 90 minutes. He completed 44 of his 59 passes giving him a pass accuracy of 72.9% with 83 touches over the whole game.

As mentioned, he delivered 3 key passes (2 assists), while also sending in 5 crosses to the box. He completed three out of three of his take-on’s and recovered the ball 9 times. His defensive duties were not shirked either with a team-high 5 successful tackles out of 7.

As his heat map shows, although nominally on the left of the two behind Haaland, he interchanged with Hazard and drifted across the pitch (as evidenced in the opening goal).

Julian Brandt: “I would’ve obviously preferred it if we had been playing under normal conditions. We all need to adapt. But in a situation like this, you have to try and have fun. And we did at times. And what better way to resume our campaign than with a win?

“We performed well, even if it wasn’t perfect. In the second half in particular, we should’ve tried to keep the level up. But we made it 3-0 relatively quickly; that played into our hands. Towards the end our energy levels dwindled. I thought it was good for the first game after such a long time. We can build on this.”

Lucien Favre: “Dahoud and Delaney played in front of the backline, they obviously also could get involved in the attack. Julian Brandt was in between together with Thorgan Hazard as a false no 10s. They had to play on the inside because Erling Haaland needed their support.”

Five Questions Ahead of Bundesliga Matchday 10

After the excitement of the Klassiker and the Rheinderby there is no slowing down of the Bundesliga action as matchday 10 is already upon us. Here we take a look at five questions ahead of […]

Can We Talk About THAT Penalty?

The Bundesliga’s top game on Saturday saw Borussia Dortmund come away from the Deutsche Bank Stadion with all three points after a 2-1 win over Eintracht Frankfurt. Goals from Julian Brandt and Jude Bellingham either […]