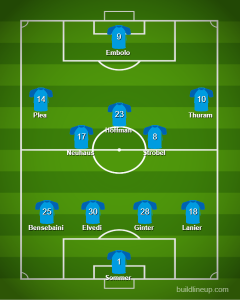 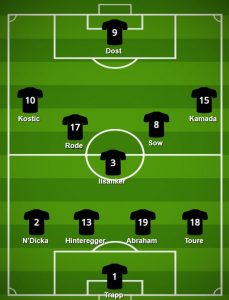 On a day with nearly perfect weather in Rhein River Valley and with the entire soccer world watching, Eintracht Frankfurt rolled back into Bundesliga action against Borussia Mönchengladbach for a much-anticipated match-up.

Eintracht looked to right the rails after sputtering in the Bundesliga for most of the Ruckrunde and for the better part of the last six months. The Eagles’ faithful fans had hoped that the long lay-off had worked wonders for the ailing Eintracht attack, and seeing Bas Dost in the starting eleven rejuvenated the hope that he would indeed become the scorer that put in 15 goals in 27 games at Porto a year ago. Trainer Adi Hütter went with a more-defensive 4-1-4-1 formation than we’ve seen from him in the past. Almost a 4-3-3, the back four of Evan N´Dicka, Martin Hinteregger, David Abraham, and Almamy Toure have not held much for the Eagles in defense, or going forward for the latter part of the season.

Saturday would be no different.

35 seconds . . . that’s all it took for Alassane Plea to sneak a goal past Kevin Trapp into the far post. In an opening sequence that was a total comedy of errors, Eintracht took the opening kick and blasted it fifty meters down the pitch to Almamy Toure, who misplayed it off his head out-of-bounds, giving Eintracht just two seconds of possession on the opening kick and showing no semblance of a buildup or plan.

That would be a recurring theme for Eintracht for a better part of the day. 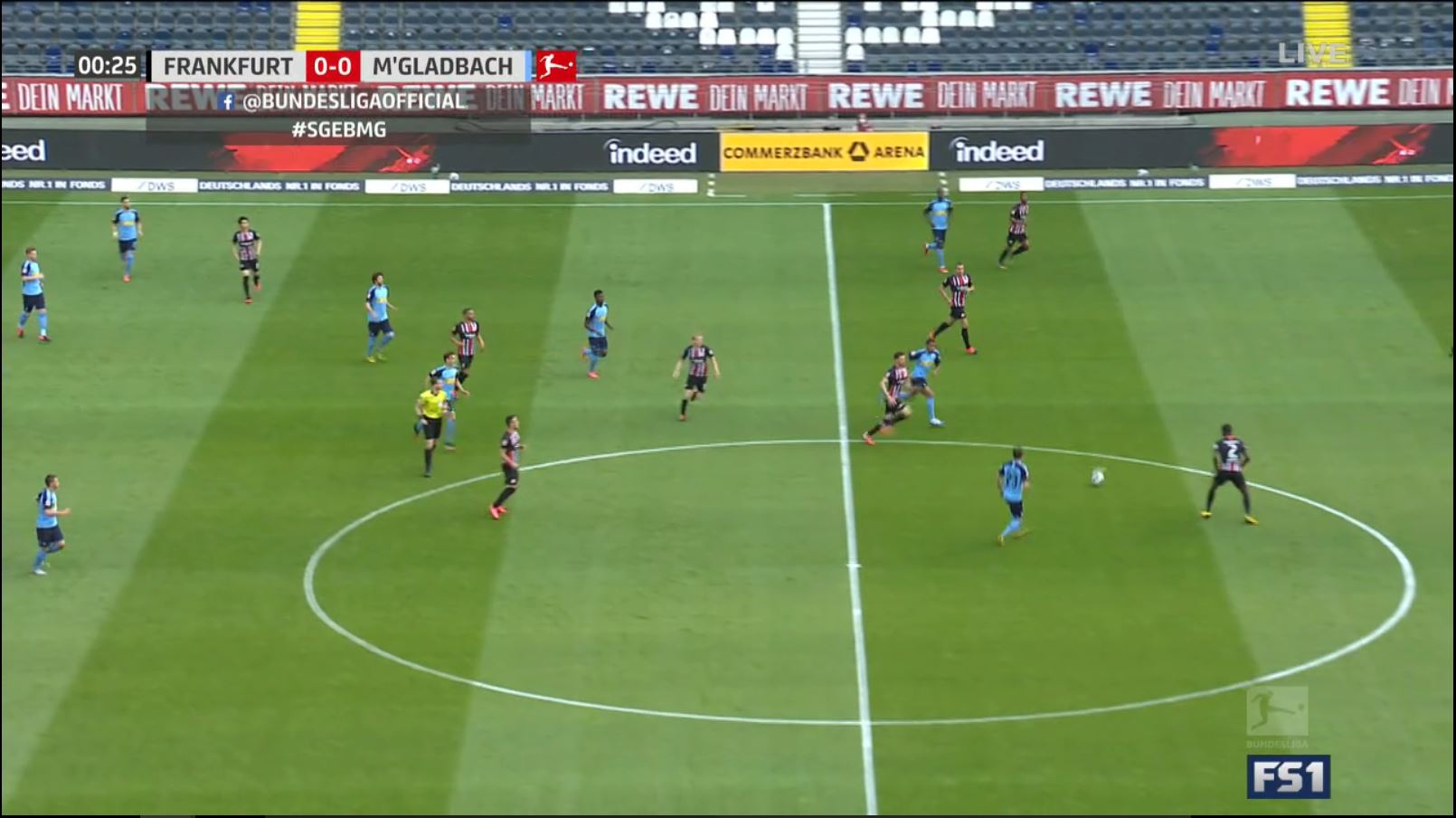 On the ensuing throw-in, Plea snuck in behind Sebastian Rode inside the midfield circle. Plea had a bad touch, but a stumbling Rode knocked it twenty meters the wrong direction and to the feet of N´Dicka. N´Dicka headed the ball back to midfield, which Florian Neuhaus returned to Breel Embolo, playing deep. Embolo volleyed it back to Plea, who touched it to Jonas Hoffman, then streaked past a sleeping Eintracht defense. 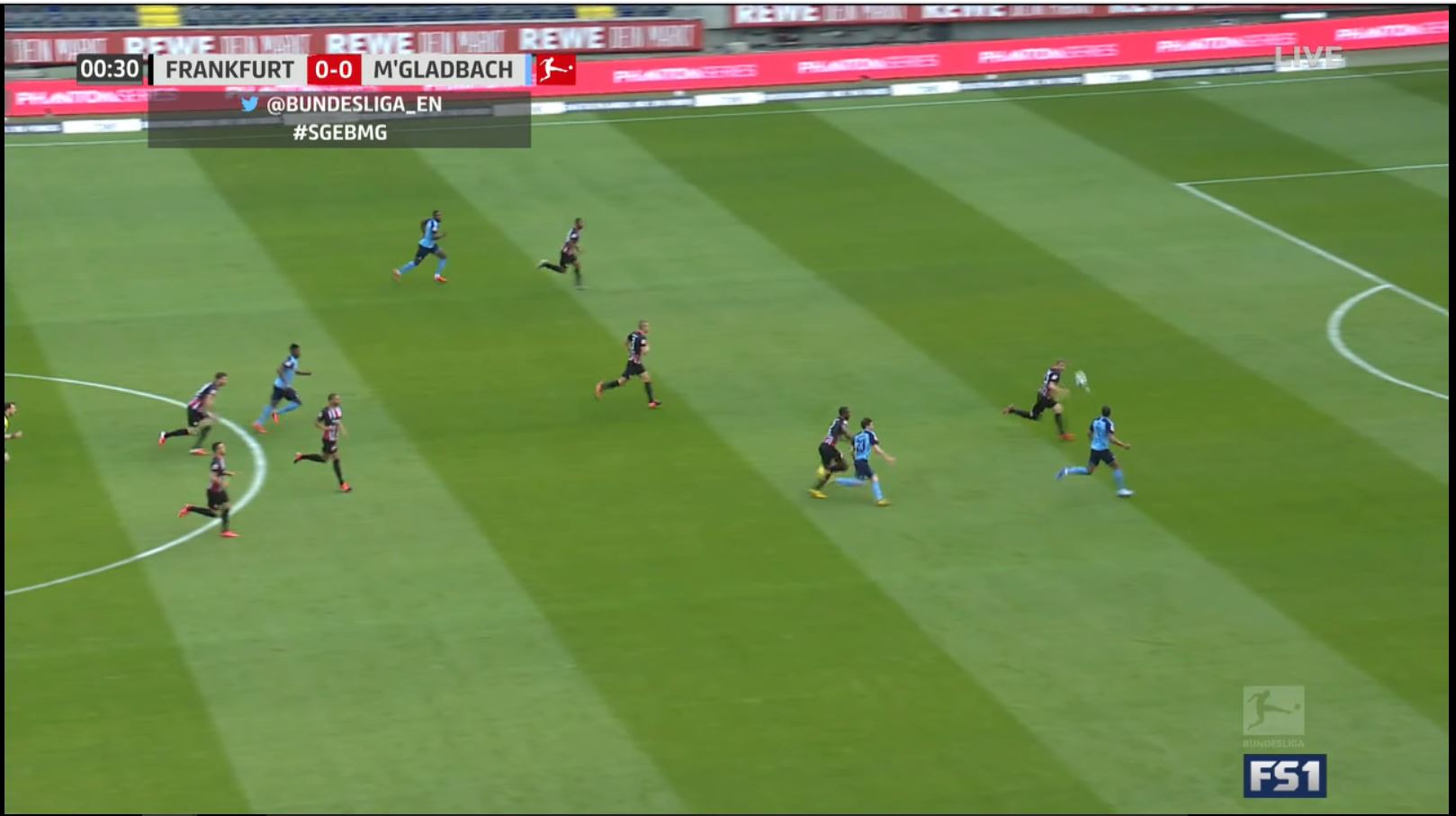 Plea got the ball back and bent one past the leaning Trapp. The Eagles had come out looking to attack, and Gladbach hit them with a quick counter. The ball by Plea was nicely placed; it wasn´t struck particularly hard, but Trapp was leaning the wrong direction and it nestled into the corner. 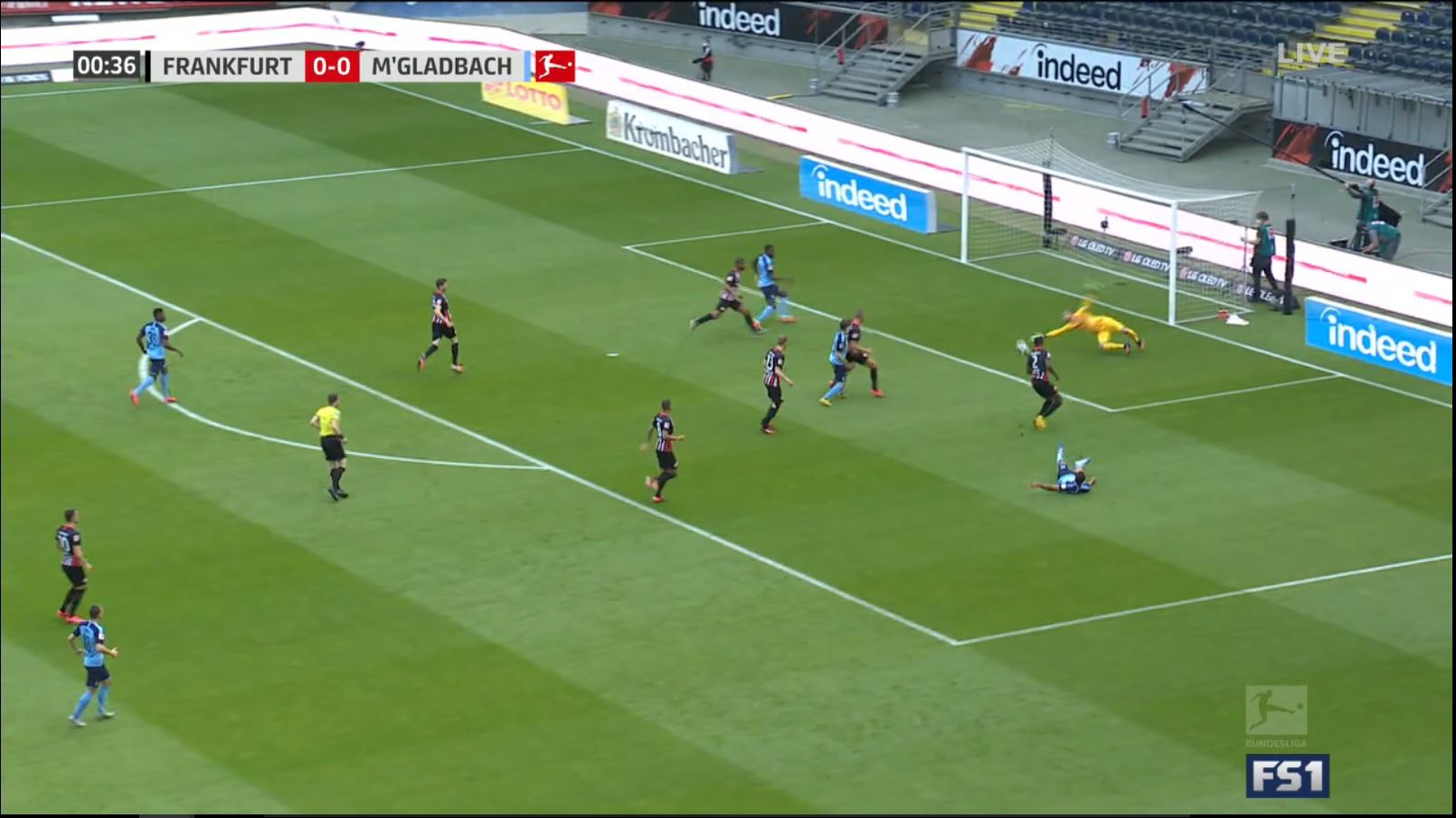 The entire sequence screamed of a team that had just came out of training totally unprepared to play.  The defense was out of sorts, out of position, and outplayed. The ball was being played and placed terribly, and Eintracht paid a heavy price for it.

The game was essentially over at that point. The following possession, instead of building a well-organized attack, Eintracht played the kickoff back to Trapp, who banged a 50-meter pass to Daichi Kamada.  The deflected ball went to Rode, who passed it past Toure and out-of-bounds. It was more of the same, time and time again: play the ball out of the back 40 to 50 meters down the pitch and watch ‘Gladbach win the ball. The attack early-on looked as organized and purposeful as a first-grade dance recital. Marcus Thuram beat them again shortly thereafter to take it to 0-2.  At the seven-minute mark, Thuram got in-between Abraham and Hinteregger to sneak in his eighth goal of the season.  With Eintracht overplaying the left side of the pitch, a deep cross off the foot of Stefan Lainer found a streaking Ramy Bensebaini. Under little pressure, Bensebaini flicked the ball to Thuram who finished with ease. Abraham completely lost Thuram on a ball played into the box, and Hinteregger never left off his mark to help.  Trapp was a sitting duck. Again, not a spectacular goal, nor particularly-hard fought. The defense simply gave it away. 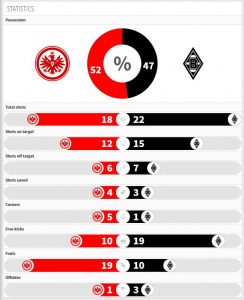 This has become a theme on the year. The defense, out of position and laying off, overlook a player making a run and concede an easy goal. Instead of working and grinding back possession to create goal chances, Eintracht consistently plays the ball deep from the back and directly to the other team. The gameś stat line doesn’t look so bad. Eintracht actually won possession, but anyone who watched the game knew that Eintracht never stood a chance. Despite Filip Kostic’s free kick (and the immediate botched rebound by Djibril Sow), Eintracht really never posed a serious threat through the first 80 minutes. The insertion of Andre Silva and Timothy Chandler picked-up the attack, with Silva finally finding the mark on a nice run at the 81 minute mark on a nice ball through by Rode.

Eintracht must stabilize their defense in the next few weeks.  They must find a way to formulate more attacks.  While Dost is winning balls in the air (5.8 per game), he does nothing with them. Kamada is providing no punch in Bundesliga action whatsoever. The backline of N’Dicka and Toure is constantly out of position and pose no threat on the attacking end. N’Dicka and Toure’s crosses were consistently missing the mark against ‘Gladbach. From the duo, only two of their eight crosses tried were accurate, and they combined for 0 completed long balls on the game.

With Toure on the right side, there’s no significant offensive threat to balance out the field and free up Kostic to do his work. With no real threat in the middle, Kostic is also having to duck inside to try to find space and create. Kamada, who had a hat trick against RB Salzburg in Europa League’s round of 32 and a brace against Arsenal in the group stage, must find his Bundesliga bearings. Eintracht has now lost their last four Bundesliga games by a combined score of 11-2 since the 5-0 drubbing of Augsburg. With eight games left in the season and staring straight at a Bayern Munich side that will want revenge from the last matchup, Eintracht has a heavy load in front of them.

The matches are coming thick and fast for the Bundesliga’s European contenders after the internationals and a return to domestic action. Important Champions League points are on offer as the group stage starts to take […]

The clash between Sporting and Eintracht Frankfurt on Champions League matchday 6 at the Estadio José Alvalade is a winner-takes-all affair with a place in the last 16 awaiting the winner. In such a tight […]

Eintracht Frankfurt are the next club to attempt to stop the Union Berlin rollercoaster as the minnows from Köpenick continue to defy the odds and lead the Bundesliga table. The matchday eight clash at the […]