Seventy long days since Bundesliga matchday 25 was played, we finally got to witness topflight football in Germany again- albeit in a much-changed guise. After much debate and a huge amount of logistical planning, matchday 26 took place. Here we look at the winners and losers from the weekend action.

We first have to put the return of the Bundesliga into perspective. In the current global crisis, playing a game seems almost trivial, but legendary Milan trainer Arrigo Sacchi’s wise words seem pertinent here: “Football is the most important thing of the less important things in life”.

The return of the Bundesliga, while not wholeheartedly supported in Germany, did bring a mild form of relief to what has become an endless, monotonous, ‘Groundhog Day’ cycle of self-isolation. Those who love the game and the German top flight have not been enjoying going cold turkey within the vacuum created in the Bundesliga’s absence.

Just to be able to sit down and get back to some sort of ‘normality’ on a Saturday afternoon was a tonic to so many fans (except maybe Schalke ones). With the world’s eyes on the Bundesliga, the pressure to deliver was massive. Of course, there are arguments about it not being ‘right’ without the fans, but from a personal point of view, I’d take what I saw over nothing at all. If it can be made safe, let’s get that Derbystar ball rolling once more.

With all eyes on the Bundesliga, the cable broadcaster Sky were the big winner this weekend. According to the media magazine DWDL, on Saturday Sky reached more than 6 million viewers combined with its pay and free-TV customers.

Some 2.45 million viewers tuned in for free to enjoy the Konferenz– a simultaneous live broadcast of the five afternoon games that switches between the games. Sky enjoyed an 18.2% share of the market.  A spokesman for the German Football League (DFL) told AFP the matches were televised by more than 70 broadcasters worldwide.

The fans may not have been in the stadia, but the viewing figures show that plenty (record numbers in fact) were watching on from their own homes.

No Axel Witsel, no Emre Can, no Marco Reus, no Jadon Sancho in the starting line-up and no 80,000 passionate fans driving them on from the stands, but none of that seemed to bother Borussia Dortmund as they comfortably saw off a lacklustre Schalke.

Two goals in each half meant that they carried on their winning ways from before the lockdown and maintained touching distance with leaders Bayern in the title race. Erling Haaland showed there was no ring rust as he took his season’s tally to ten, while Raphael Guerreiro popped up with two very well taken goals. With Sancho and Reus absent, it fell to Julian Brandt to take on the creative mantle and the youngster put in a Man-of-the-Match performance.

What with the Jürgen Klinsmann debacle fresh in people’s memories and Salomon Kalou making all the wrong headlines for his flagrant disregard for social distancing measures, Hertha Berlin were in much need of something to cheer about.

The choice of Bruno Labbadia as new trainer was not exactly met with universal approval at the Olympiastadion, but he got off to the perfect start away to Hoffenheim with a 3-0 win. It wasn’t without its controversy with the players celebrating a little too ‘closely’, but then Matheus Cunha’s stunning solo-effort to make it 3-0 was tonic to anyone wishing to put a dampener on Hertha’s day.

The Foals literally bolted out the stable in their away trip to Eintracht Frankfurt. There was no evidence that Marco Rose’s side were going to need time to get into their stride. It took them only 37 seconds to open the scoring through Alassane Plea and then Markus Thuram added a second with just seven minutes on the clock. A third goal via a Bensebaini penalty put the result beyond doubt, making Andre Silva’s goal a mere consolation.

Gladbach have now won their last three away games (something that was their Achilles heel in the Hinrunde) scoring ten goals in the process. They have jumped over RB Leipzig into third and now have Champions League qualification firmly in their own hands.

If Bruno Labbadia enjoyed a dream first match as Hertha coach, the opposite was very much the case for Heiko Herrlich over at Augsburg. The new FCA boos didn’t even male it to the game.

The 48-year-old left the team hotel in the week to buy toothpaste and skin cream (!), thus breaking the German Football League’s strict health protocol for returning to action and it was agreed that he would not take control of the team on Saturday as a result. Talking of results- Augsburg lost 2-1 at home to Wolfsburg.

“I made a mistake by leaving the hotel. Even though I followed all hygiene measures both when I left the hotel and otherwise, I cannot undo this,” Herrlich said in a statement.

“In this situation, I did not live up to my status as a role model for my team and the public. I will therefore be consistent and stand by my mistake.”

On the plus side, he does have very soft hands.

Having enjoyed their previous two visits to the Signal Iduna Park, Schalke certainly didn’t have a nice afternoon this weekend. Aside from the opening five minutes when they pressed the home side well, the performance was dismal.

The defeat means that the Königsblauen have won just once in the Rückrunde. While nobody had a game to goalkeeper Markus Schubert will particularly want to move on quickly from the defeat. Schalke were already 1-0 down when Schubert made a hash of a clearance and the ball was fed into Raphael Guerrero to fire past him just before the interval.  He hardly covered himself in much glory for BVB’s third goal either, watching Thorgan Hazard’s shot fly past him.

On the plus side…..um?….there wasn’t one. Sorry Schalke fans.

The Breisgauer have had their ‘unfair’ share of bad luck with VAR this season and once again Christian Streich’s side were denied a win by the video replay on Saturday against title contenders RB Leipzig.

Okay, so the decision was correct, but oh how close it was- we are talking millimetres here. Robin Koch thought he had stolen the points for Freiburg in the fourth minute of injury time only for the technology to rightly spot a miniscule segment of Lucas Höler’s shoulder was offside. 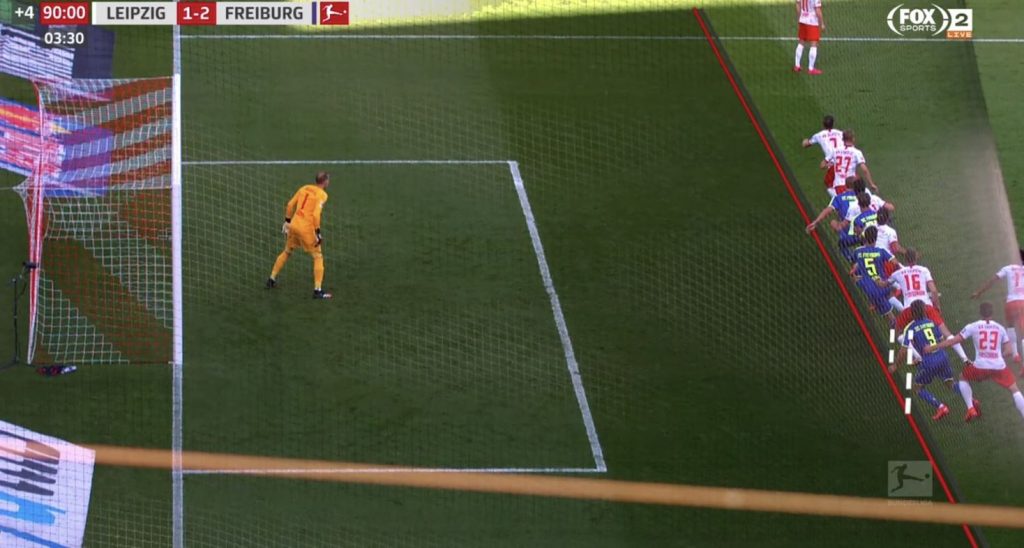 The fact that Gladbach ran out comfortable 3-1 winners at the Commerzbank Arena will go some way to erasing the momentous cock-up that was Jonas Hoffman’s non-goal as the game wound down to a finish against Frankfurt.

Post-match Hofmann admitted he could laugh about it with three points safely in the bag, but that still doesn’t take away from the appalling scene witnessed on the pitch.

Having rounded Eintracht keeper Kevin Trapp, three Fohlen players led by Hofmann advanced on the empty net. Delaying (for what nobody knows, he eventually nonchalantly stroked the ball towards the goal, only for the never-say-die Martin Hinteregger to race back and block on the line.

I waited until the final match of matchday 26 had finished before posting this article as I had a sneaky suspicion that Werder would need adding to the ‘Loser’ section and so it transpired. A 4-1 home defeat (their seventh in a row at the Weser Stadion) to Bayer Leverkusen heaps more woe on the struggling Hanseaten.

They sit 17th in the Bundesliga, with the worst defensive record in the league (59 conceded) and the second worst goal scoring record (28 scored). It was pretty woeful stuff against Leverkusen and it is hard to imagine where the points they desperately need are going to come from. Could we be seeing the Nordderby against HSV taking place in Bundesliga II next season. On the evidence of this display, very much so.

It is patently too early to be talking of a crisis before the season has even begun in earnest, but it is fair to say that things aren’t exactly going to plan at Hertha Berlin […]

He Said What? The MD33 Trainer Soundbites

Der Klassiker between Borussia Dortmund and Bayern Munich at the Signal Iduna Park was certainly not without entertainment, drama and talking points as the two sides shared a 2-2 draw. Leon Goretzka gave Bayern a […]