With Bayern Munich preparing for ‘der Klassiker’ and a title run-in that would see them win an eighth straight Bundesliga title, all is not sweetness and light at the Bavarian giant. An ugly dispute between the club and a fan shows no sign of letting up. It’s all about the banners you see.

Bayern vs the fans?

That a majority of German fans are opposed to Monday night football is well documented and a concerted effort by various fan groups did eventually succeed in getting them abolished in the top two divisions from the 2021/22 season. They will however remain in place in the next tier down- namely the Dritte Liga (third division) where Bayern Amateurs play.

The Bayern Amateure have a large dedicated following and they made their feelings clear in a match back in February against Hallescher FC at the Stadion an der Grünwalderstraße. A huge banner was displayed, which read “Bayern Amateurs against Monday games”.

All very innocent and rather typical you would think in German football. Not so, as the incident was the spark that has set off a dispute between the club’s bosses and a die-hard Bayern fan group.

When a letter was sent out to a Bayern fan at the start of March signed by CEO Karl-Heinz Rummenigge and executive vice-chairman Jan-Christian Dreesen, he was informed that he was banned from all club facilities and locations, including the Allianz Arena for ‘unpermitted positioning of a banner’ with the club citing broken fire regulations.

Why would Bayern take such draconian action against a solitary fan, for a rather harmless banner?

The fan in question belongs to the ‘Munich’s Red Pride’ (MRP) fan group and they have been highly (and very visibly) critical of the club’s upper echelons for a while now- especially with regard to the club’s dealings with Qatar. It has been reported that the banned supporter had spoken earlier this year at an event organised by Club Nr.12- a collective of Bayern fan groups titled ‘Qatar, Human Rights and FC Bayern: hands out, mouths shut?’

Last January, a banner appeared at the Allianz Arena saying: “Hervorragende Trainingsbedingungen” (excellent training conditions) featuring a picture of both Rummenigge and Uli Hoeness with money covering their eyes- citing Bayern’s seeming ignorance of the human-rights abuses occurring as the Gulf state prepares for the next World Cup. 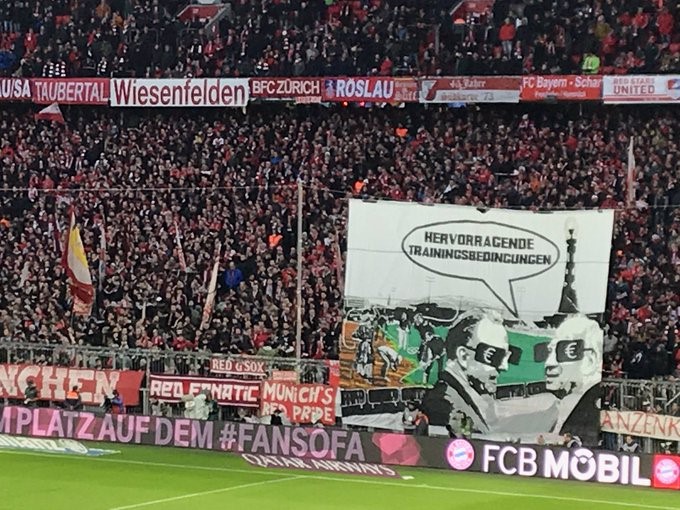 Fan criticism is nothing new, but Bayern’s tolerance was taken to breaking point at the now infamous Hoffenheim game this season, where anti-Dietmar Hopp banners caused the game to be halted and Rummenigge to stress afterwards that: “I am ashamed of what has happened and I have apologised to Dietmar Hopp. We will take action against these people in the stands. They have absolutely no place in a football stadium.

“What happened there in the stands is not to be excused. That is the ugly face of Bayern Munich. We have had everything filmed and will take action with all our might against those who have discredited FC Bayern here.”

Sounds very much like a declaration of war on the critical fans. A declaration that the fans responded to in the final game before the lockdown against Augsburg with a banner which read: “The very ugly face of FC Bayern is shown by those who take blood money from Qatar!” 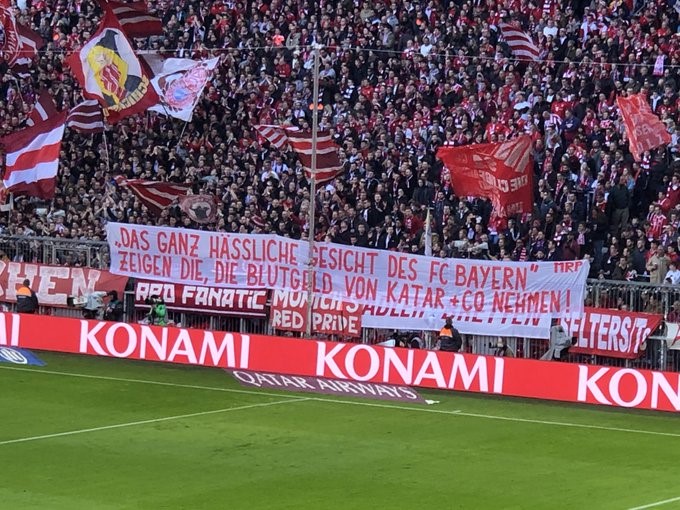 The stadium ban handed out to the fan has also drawn criticism from Club Nr.12. “This arouses the suspicion that Bayern are using this banner as an excuse to silence a critical supporter whose fan group has consistently criticised the club’s engagement in Qatar” they said in a statement.

“Those who don’t speak out clearly and unequivocally in favour of human rights in their dealings with their own backers from Qatar aren’t only squandering their own credibility; they’re also bringing FC Bayern into disrepute.

“If Bayern have set themselves the aim of further restricting the space in which the terraces can be critical, they will face hitherto unseen resistance. This farce will not be accepted.”

This week Bayern had a lawsuit filed against them with the Munich district court by the supporter’s lawyer Andreas Hüttl, demanding the ban be overturned. It claims the ban is unlawful as no fire regulations were in fact broken, and Bayern do not own the Stadion an der Grünwalderstraße (it is municipally owned) and do not have the right to issue bans.

It is an ugly confrontation with neither side looking like they are prepared to back down.

The lyrics from the Clash anthem ‘Should I stay, or should I go?’ have never seemed more apt in regards the future of a Bundesliga star. In the case of Robert Lewandowski, the question remains […]

Can the Sadio Mané Party Start Again at Bayern?

Amongst the recent talk of crisis at Bayern Munich, Sadio Mané came up more than most as a player suffering a dip in form. The speed of his adaptation to the Bayern team was questioned, […]

Why is Konrad Laimer Such a Wanted Man?

Media reports claim that Premier League giants Chelsea are going to be rivalling Bayern Munich in pursuit of RB Leipzig midfielder Konrad Laimer. With two such powerhouses after the Austrian, we look at what is […]