Items of great rarity are usually of huge value and admired by those with an appreciation. A four-leaf clover, the birth of a rainbow or a Golden Tiger, few people ever get to witness such marvels. On matchday 29 of the Bundesliga we were treated to our own rarity- a Marcel Schmelzer goal.

With Borussia Dortmund 3-1 up and cruising against Paderborn on Sunday, club veteran Marcel Schmelzer was introduced as a substitute for the final ten minutes at the Benteler-Arena. Five minutes later the former BVB captain set-up Achraf Hakimi for the visitors fourth goal. His afternoon then took an even bigger upturn with a goal for himself in the 89th minute. Axel Witsel’s ball in from the right found left back ‘Schmelle’, who stroked the ball home like he was a centre forward.

A rare occurrence indeed as you have to go all the way back to September 2013 for his last Bundesliga goal (he only has three to his name in over 250 games). Back then the Schwarzgelben earned a point against 1.FC Nürnberg in a 1-1 draw thanks to Schmelzer’s free kick. The match however was to be cut short as the goal scorer was forced off injured at half-time.

Not exactly prolific with 2,444 days falling between his second and third goal for the club. His first for the club had come against Köln in 2011.

Where are they now?

A lot has changed at the Ruhr club as a glance at the team sheet from September 2013 indicates. Of the matchday squad that afternoon, only Marco Reus is still at the club.

The back four which he was part of consisted of Sokratis (now Arsenal), Neven Subotic (Union Berlin) and right back Erik Durm (Eintracht Frankfurt). Keeper Roman Weidenfeller retired in 2018 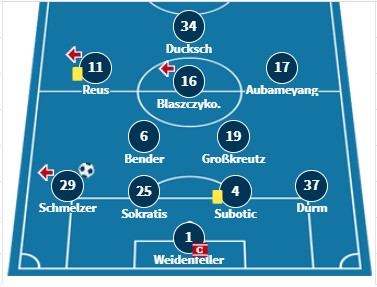 Schmelzer’s current contract runs out next summer, but with game time severely limited, it is unclear what his plans are for the immediate future. Whatever happens, it seems safe to say we won’t be seeing another Schmelle goal anytime soon!

Bayern Munich’s 1-0 win in der Klassiker on Tuesday has put them well on course for an eighth successive Bundesliga title with a seven-point lead now opened up over Borussia Dortmund. Joshua Kimmich’s goal took […]

The new Bundesliga season doesn’t start until the beginning of September, but the first shots have been fired off the pitch on the day that Borussia Dortmund return to training and Bayern prepare themselves for […]

More Questions Than Answers for Edin Terzic at Borussia Dortmund

As Borussia Dortmund drop down to eighth in the Bundesliga following their defeat to Union Berlin, there seem to still be more questions than answers right now for coach Edin Terzic. From the right formation […]