This year’s 3. Liga, the third tier of German football, has garnered lots of attention, for the right reasons. At the time of writing, just 6 points separate leaders MSV Duisburg from 11th placed Hansa Rostock, meaning the promotion race is wide open to more than half of the league. Like in the 2. Bundesliga, the top two teams go up automatically, while the third place team will play the third last team from the second tier in a playoff.

At the other end of the table, there is a bit more space between the teams, but things are fairly straightforward. At the end of the season, the four bottom teams will be relegated – no relegation playoffs here – and those teams will drop into one of the five regional leagues (Regionalligen) that make up Germany’s fourth tier – Nord, Nordost, West, Südwest and Bayern. (In English, that’s North, North-East, West, Southwest and Bavaria).

Yes, that’s right. Five Regionalligen – but with only four teams relegated, only four can go up.

That means that one of the Regionalliga champions has to miss out on promotion. 3 of the champions are promoted automatically, provided they can get a 3. Liga license. And the other two have to meet each other in a two-legged playoff. This year, it is the Regionalliga Nordost and Regionalliga West who have been given the playoff spot rather than the direct promotion – decided by a draw back in 2018.

Of course, the issue of promotion is further complicated by the fact that the Regionalligen will not be able to finish their seasons, and as the different leagues are run by different associations, it means there are different solutions. 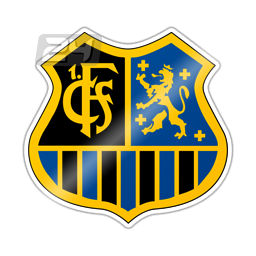 So far, only one league has been formally concluded, the Regionalliga Südwest. DFB-Pokal semi-finalists 1. FC Saarbrücken, who were six points clear at the top, were declared champions.

But those who watched FCS beat Köln and Düsseldorf in the cup may remember that their ground, the Hermann-Neuberger-Stadion, only holds around 8,000 people. This is not Saarbrücken’s usual stadium, but just a temporary home in Völklingen, used since 2016 when renovation work began on the Ludwigsparkstadion, where Saarbrücken normally play.

This represents a problem. The Ludwigsparkstadion is still not ready for the team to move back in. And while Völklingen is fine for Regionalliga football, it does not meet the standards required for the 3. Liga – where a ground must be able to hold at least 10,000 fans to be used. There are suitable grounds in Kaiserslautern and Trier, but the current tenants would not let a rival use their ground, while the DFB would not allow FCS to play across the border in France. As a result, Saarbrücken’s home games will most likely take place 200 kilometres away in Frankfurt, at FSV Frankfurt’s PSD Bank Arena, until the Ludwigsparkstadion is finished.

It is a mild inconvenience for Saarbrücken, as their stadium is expected to be ready before the end of the year anyway. For others it is a far more serious problem – Türkgücü München, for example.

Türkgücü lead the Regionalliga Bayern by nine points, and are likely to be declared champions, which would mean promotion – their third in a row. They play in a small ground in the suburb of Heimstetten, which would not reach 3. Liga requirements. In January, they decided to move to the famous Grünwalder Stadion, although they have yet to play a competitive game there, due to the coronavirus disruption.

This stadium is also used by TSV 1860 and Bayern II, who both play in the 3. Liga. That causes problems for all three. The DFB, who run the third division, will not allow three teams from the same league to use the same stadium, meaning that Türkgücü has to look for somewhere else to go. The DFB will not let them move outside Bavaria, ruining a proposal that they could play as far away as North-Rhine Westphalia. Now they must hope that 1860, currently sixth in the 3. Liga, earn promotion. If 1860 go up, there would only be two teams in the 3. Liga playing at the Grünwalder Straße, which the DFB would hopefully accept.

So what happens if 1860 don’t get promoted? (For clarity, reserve teams like Bayern II cannot be promoted to the 2. Bundesliga). Amazingly, their only option appears to be the Olympic Stadium, host of the 1974 World Cup final and home of FC Bayern for many years. There has been no football played there since 2005, when the Allianz Arena was opened. If that doesn’t work, it could have huge consequences for Türkgücü, with chairman Hasan Kivran allegedly having previously threatened to end the Türkgücü project.

Should Türkgücü not get promoted, that change would go to 1. FC Schweinfurt 05, who are second in the Regionalliga Bayern; provided they are able to get a 3. Liga license themselves.

A similar scenario has already happened in the Regionalliga West. SV Rödinghausen are the league leaders, but will not seek promotion. Their stadium holds little over 1,000, and the club did not want to spend the money that they would need to acquire a 3. Liga license. Instead, second placed SC Verl could get the chance to win promotion. While their ground does not meet the 3. Liga standards either, they could play in Gütersloh’s Heidewald Stadion (which would require some renovations first to increase the capacity), or even in Paderborn’s Benteler Arena.

But Verl would need to win a playoff to get to the third tier anyway, because the Regionalliga West winner (or in this case, runner up) does not get an automatic promotion this season. First, the playoff against the winner, or so-called winner of the Regionalliga Nordost.

The Regionalliga Nordost is currently led by VSG Altglienicke, from the Köpenick district of Berlin. They play their home games, as do a number of other Berlin clubs, at the Friedrich-Ludwig-Jahn-Sportpark in Prenzlauer Berg. There are just two problems with the ground – the first being that its floodlights are not good enough to meet 3. Liga criteria. Fortunately for Altglienicke, Köpenick neighbours Union Berlin today announced that their Altglienicke will be able to use the Stadion an der Alten Försterei for floodlight matches should they be promoted to the 3. Liga.

The other problem with the Jahn-Sportpark is that it is set to be demolished at the end of the calendar year. The plan was for a new stadium to be built on its site, for use in the 2023 Special Olympics, which Berlin will host. Unless renovation is delayed, the stadium could only be used for the first half of the season. They would have to instead use the Poststadion in the Mitte district, although the floodlights would need to be upgraded first.


It may not even be Altglienicke who are declared champions, as the league is yet to decide how to end the season. Lokomotive Leipzig sit second, behind on goal difference but with one less game played. Should the final positions be decided by a points-per-game system, it would be Lokomotive promoted instead. Although their Bruno-Plache-Stadion does not currently meet 3. Liga standards, it would be improved in time for the start of the season if Leipzig go up.

Which leaves just the Regionalliga Nord. As of yet, VfB Lübeck have not quite been declared champions – that won’t be made official until later this month – but the other clubs in the league have voted for Lübeck to be the champions, and Pablo Thiam, whose Wolfsburg II team will be runners up, has congratulated them on their almost certain title. They will be able to hold 3. Liga football in their own ground too, so long as undersoil heating is added to their Lohmühle stadium.

There will be 20 teams in next season’s 3. Liga, that’s all we know for now. Who those 20 teams will be is anyone’s guess. Why teams need to have 10,000 capacity stadiums when nobody is allowed in anyway is anyone’s guess, too. Whoever said that Germans are efficient and well organised perhaps needs to rethink.

Does the Away Goals Rule Need Scrapping?

It cannot be argued that the promotion/ relegation play-offs in all three top divisions in Germany didn’t produce drama and excitement. Werder Bremen, 1.FC Nürnberg and SC Verl all emerged triumphant courtesy of the away […]

The magic of the DFB Pokal will have to be in full effect on Tuesday if fourth tier 1.FC Saarbrücken are going to cause an upset against Bayer Leverkusen in their semi-final clash. Under normal […]