It is a well-known fact that defensive midfielders don’t get the credit they deserve and at RB Leipzig it is no different. Timo Werner’s goals, Christoher Nkunku’s flair, Marcel Sabitzer’s all-round excellence, and Dayot Upamecano’s defensive power all draw the plaudits, whereas the contribution of Konrad Laimer has gone largely unnoticed.  Let’s put that right.

There is an argument that the €7 million summer 2017 signing from Red Bull Salzburg (an absolute bargain) has been Leipzig’s most important player this season. Julian Nagelsmann has taken to life in Saxony like a fish to water with his high pressing and vertical play, but would he have enjoyed such an impressive first season without the understated contribution of his number 6 Laimer?

‘Sexy football’ as Ruud Gullit once described it is the aspiration, but somebody has to do the dirty work and just like Ngolo Kante in England, that role has been filled at the Red Bull Arena by RB’s 23-year-old Austrian. This season Laimer has so far won 332 duels putting him 12th overall in the Bundesliga, he leads the entire league for tackles in the midfield third with 50, while also topping the division for tackles in the attacking third with 16- showing that he is not just content to sit in front of the defence and mop up the danger.

When it comes to pressures (the number of times he applies pressure to the opposition ball carrier) he leads the Bundesliga by a long way with 797. Tackles made (96) and tackles won (58) put him at the top of all Bundesliga teams as well. With 56 fouls committed, he is clearly putting himself where he needs to be, but an 82.6% pass completion rate show that he his not just a destroyer, but a facilitator.

That is the remarkable thing about Laimer- he does the dirty work, but that is not the sum total of his game. He is more than capable of contributing in a positive way. His stats for successful dribbling put him in the 81st percentile for defensive midfielders across Europe’s top 5 leagues this season. 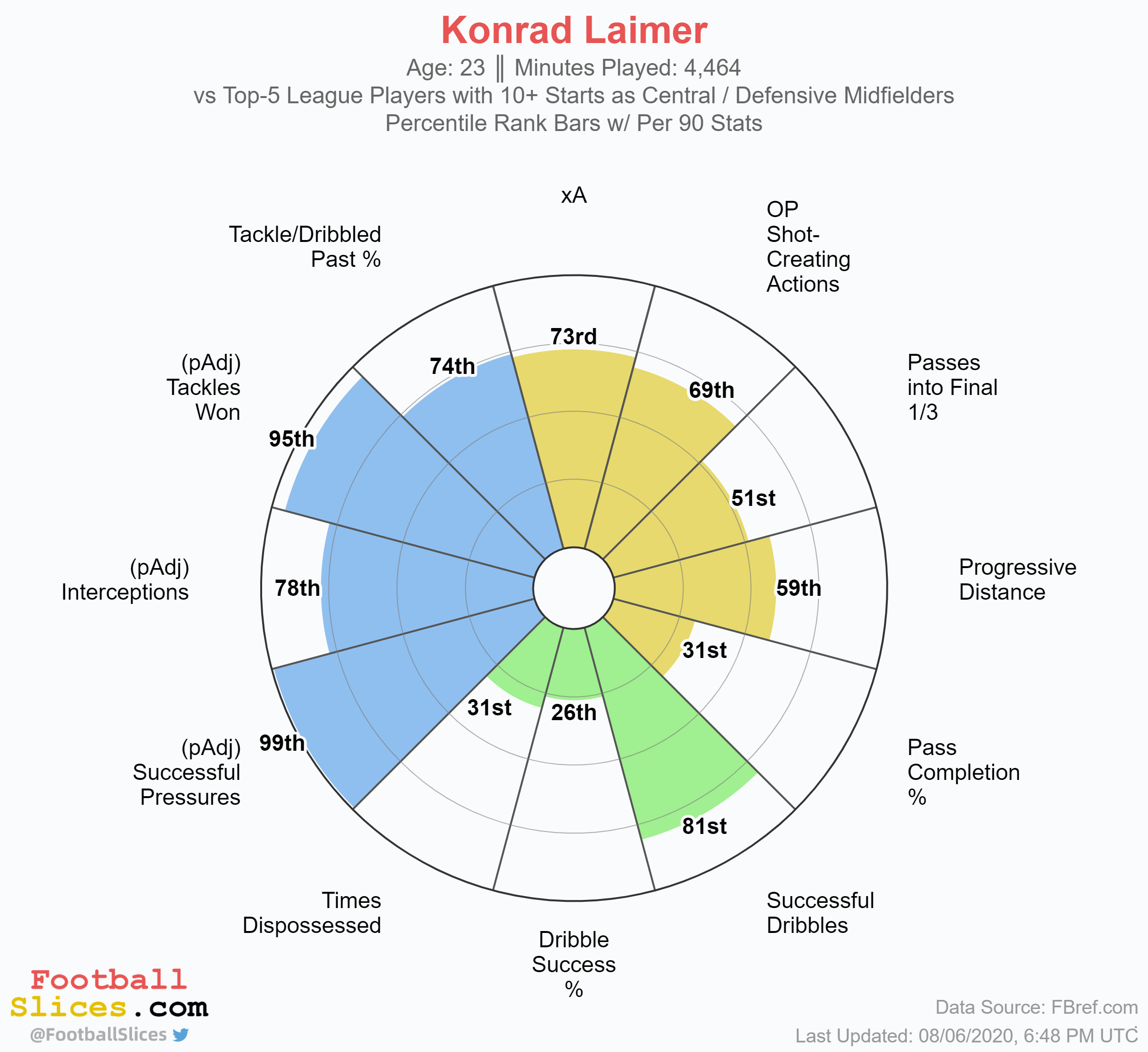 Julian Nagelsmann has been very adaptable this season using a 3-5-2, 4-2-2-2, or 4-4-2, but key to all of them has been the use of Laimer as the anchor in midfield. He has notched up 27 Bundesliga appearances (24 starts) making him a vital cog in the side seeking to push Dortmund for second spot in the table behind Bayern.

His performance for Leipzig earlier this season against Tottenham in the Champions League made many non-Bundesliga observers sit up and take note and he will be very much on the radar of so-called bigger teams in the next few years.

If you were looking for a new inductee to the ‘underrated midfielder’ Hall of Fame this season, you would struggle to find a more deserving nominee that RB Leipzig’s Konrad Laimer. Originally signed as a long-term replacement for Liverpool-bound Naby Keita, the young Austrian has certainly lived up to the expectations to become a key member of die Roten Bullen’s first choice XI.

The regular season may be over, but that doesn’t stop the talking points arriving and Paris St Germain sporting director Leonardo has provided one by taking a swipe at German clubs for their poaching of […]

As the legendary former national team trainer once said: “Nach dem Spiel ist vor dem Spiel” (after the game is before the game). One game finishes, and another arrives hot on its heels. Matchday 7 […]