Robert Lewandowski has scored the most goals this season across all of Europe’s top five leagues.

Bayern Munich’s star striker has been unrelenting in his quest to win Europe’s golden boot. As Bayern sit on the cusp of an eighth-straight Bundesliga title and could be considered favorites for the Champions League, it’s time to start looking at Lewandowski as a serious contender for the Ballon d’Or.

Since 2007, the Ballon d’Or has been monopolized by two men: Lionel Messi and Cristiano Ronaldo. In 2018, their stranglehold on the award was temporarily interrupted by Luka Modrić, only for it to be reclaimed by Messi in 2019. In 2020, as the two stars see their numbers come back down to earth ever so slightly, Lewandowski has emerged as the next footballer to potentially break the cycle.

This is the third time Lewandowski has hit 30 goals in a league campaign for Bayern. With four remaining matches, he’s well-positioned to break his personal best. Across all competitions, the Pole has 45 goals, which tops his previous record of 43 in 2016-17, all the more impressive considering that Bayern still wait in the Champions League round-of-16. Lewandowski’s goal tally this year has him head and shoulders above some big names.  Messi has 24 goals in all competitions, while Ronaldo sits at 25 goals. It’s been a slow year for the two megastars, by their standards anyway.  In fact, the only player close to Lewandowski is Timo Werner with 31 goals.

Lewandowski’s career year came at the perfect time. With Messi and Ronaldo failing to fill the net at their normally nonsensical pace, it has opened a door for the Polish international. It also hasn’t hurt that Bayern has been revitalized under new coach Hansi Flick. Bayern is generating more offense, and pressing more intensely, something Lewandowski is rather adept at.  Additionally, Lewandowski has benefited from a career year from Thomas Müller. The two have developed a fine partnership, with many of Müller’s 20 assists going to the star striker.

There is little doubt that Lewandowski has put up these numbers on anything but merit. Only five of his 45 goals have come from the penalty spot. Comparatively, eight of Ronaldo’s 25 goals have come from the spot. His xG (expected goals) numbers are incredibly high as well. His 32.8xG is the highest in Europe’s big leagues. Neither Ronaldo nor Messi have reached 20xG. He’s averaging 1.08 goals/90 minutes, which is first in the Bundesliga and second behind Ciro Immobile in Europe. Basically, if Lewandowski is playing, he’s probably scoring.

Despite being a goal scorer, Lewandowski has shown himself to be adept at his defensive duties, primarily his pressing. He’s the first line of defense when Bayern loses the ball, and under Flick, he has been terrific. He has been more aggressive at tackling, racking up career highs in tackles and tackles attempted. Lewandowski is first and foremost a striker but has shown tremendous ability to adopt Flick’s system.

Naturally, Lewandowski is going to have some stiff competition for the Ballon d’Or. Messi and Ronaldo, while not having particularly incredible seasons, are still two of the best players on the planet. Messi has particularly been good this season, although not always at scoring. The Argentine is still the focal point of Barcelona’s offense. He creates far more chances than Lewandowski. While Lewandowski averages 3.43 shot-creating actions/90minutes, Messi has that number nearly doubled at 6.11 in all competitions. This isn’t really a fair comparison to Lewandowski, as he’s the one finishing these actions, not creating them. However, if a voter values the creation of a chance more than the chance itself, it could come back to hurt Lewandowski at the ballot.

Ronaldo has also generated more shot-creating actions/90 minutes, but the difference is not nearly as severe at just 3.96. Ronaldo shoots more than Lewandowski as well and has more successful dribbles. However, Lewandowski has a higher dribble success rate. Ronaldo isn’t likely to beat Lewandowski on stats alone. To beat Lewandowski, Ronaldo will likely need to collect more silverware than Bayern’s number 9. A Champions League win will look good for the former Real Madrid star. A European championship would look even better for Ronaldo, but he won’t get the chance as the tournament has been delayed a year.

Some of Lewandowski’s stiffest competition might come from the Premier League. Kevin De Bruyne has, like Müller been a fantastic distributor of the ball, only Atalanta’s Josip Iličić has a higher rate of shot-creating actions than the Belgian. De Bruyne will likely need a strong showing in the Champions League, however, if he wants a chance at the Ballon d’Or. Liverpool’s domination of the Premier League doesn’t look good for anyone at Manchester City. Speaking of Liverpool, last year’s runner up Virgil van Dijk, is another strong candidate. The way in which Liverpool have steamrolled through the rest of the Premier League gives van Dijk a great shot at picking up a few votes. His stellar defense and ability to play the ball out of the back has many praising him as the game’s best defender. Liverpool’s sub-par Champions League performance could hurt him in the long run, as well as his teammates Mohamed Salah and Roberto Firmino, but a strong return to play soon might cause voters to forget about the loss to Atletico Madrid.

It would be good to mention Kylian Mbappé as well. Still riding high from the 2018 World Cup win, the young Frenchman has not played as much as Lewandowski, but his goals and assists/90 stats, as well as xG/90, is superior to Lewandowski. A healthy start to next season and Mbappé could seriously pressure for the award that he’s expected to contend for in the next decade. 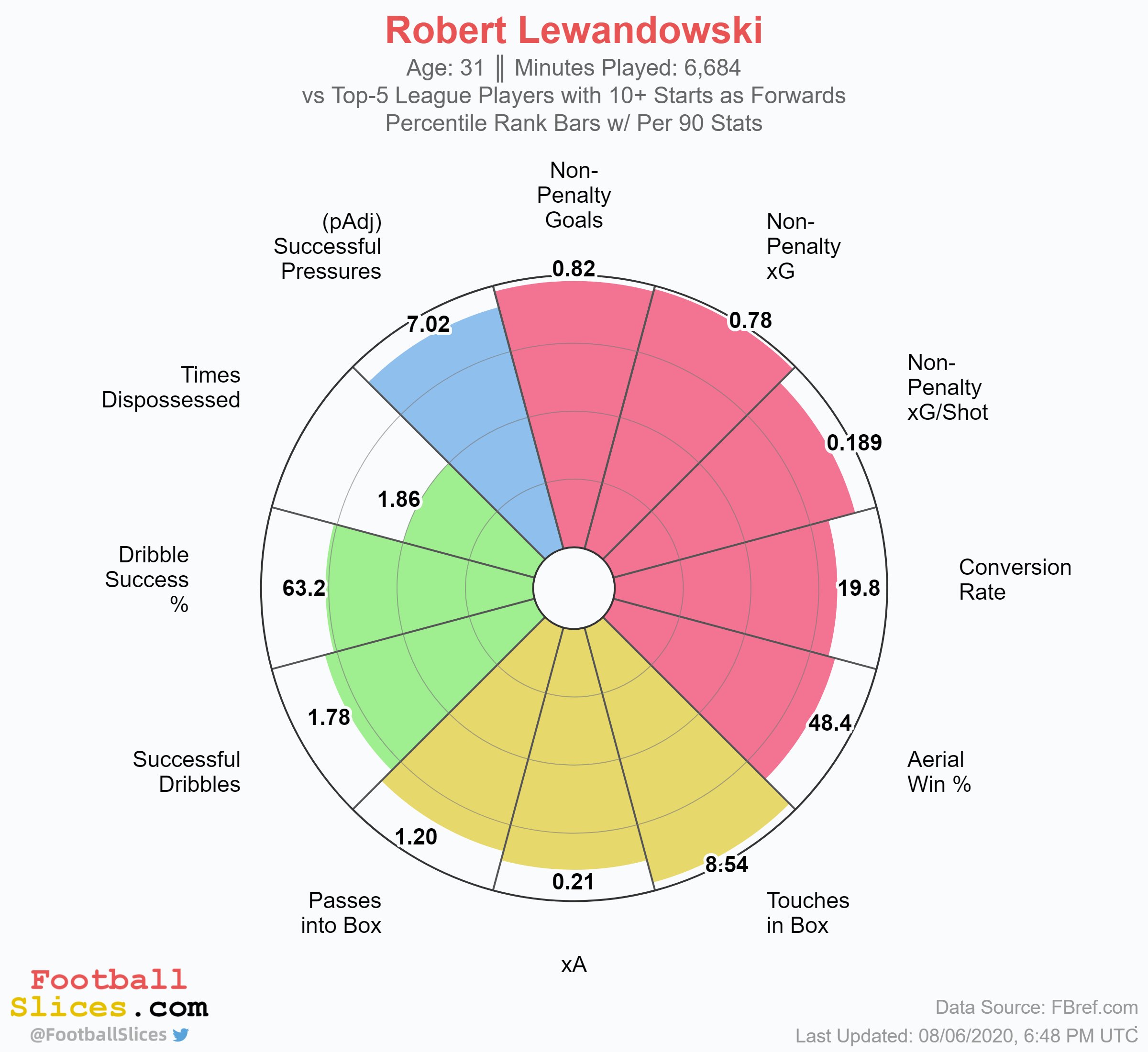 Fair or not, one big issue holding Lewandowski back is the league he plays in. Bayern’s dominance since 2013 has left some wondering about the quality of competition. To win the Ballon d’Or, Lewandowski is going to have to perform deep into the knockout stages of the Champions League, maybe even win it. That brings up an interesting problem; the Champions League resuming in August, according to reports, means the Bundesliga and DFB Pokal will be long over. Meanwhile, in England and Spain, those clubs will likely have better match fitness than the likes of Bayern. Since the Premier League and La Liga got a later start.

Lewandowski also has a reputation of being a poacher, the best poacher in the world mind you, but still. His game lacks the play-making of a Ronaldo or Messi. Only five assists and a pass completion percentage of 76.9% doesn’t scream “Ballon d’Or winner.” Especially as the years passed have seen Messi and Ronaldo trade wins by doing almost everything on the pitch every season. Still, goals win games and right now one is better at putting the ball in the net than Robert Lewandowski.

1981 was the last time a Bayern Munich player was awarded the Ballon d’Or; Karl-Heinz Rummenigge was the lucky winner. No Polish player has ever won. The closest were Zbigniew Boniek and Kazimierz Deyna who both finished 3rd in 1981 and 1974 respectively. To be the first Pole to win the Ballon d’Or and first Bayern player since the 80’s. Lewandowski is going to need to keep scoring, he’s going to need to win silverware, and he’s going to need his competition to keep at bay. Throughout his great career, this might be his best chance to join the likes of Müller, Beckenbauer, Cryuff, Zidane, Ronaldo, and Messi. He’ll have to wait until December to find out if he gets to be in that club.

About Harrison Prolic 3 Articles
Full-time visual journalist with a love of German Football. Formerly of The Comeback and Bayern Central. Currently residing in Wisconsin, but hails from Denver, Colorado. Was almost run over by Jürgen Klinsmann in a golf cart one time.
Website Twitter

Quite remarkably Bayern Munich striker Robert Lewandowski is still very much on course to break Gerd Müller’s long-standing Bundesliga scoring record of 40 goals in a single season. As we enter the final stretch of […]

The lyrics from the Clash anthem ‘Should I stay, or should I go?’ have never seemed more apt in regards the future of a Bundesliga star. In the case of Robert Lewandowski, the question remains […]