Julian Nagelsmann’s return to Hoffenheim was a happy one with his RB Leipzig side coming away with a 2-0 win to cement their place in the Bundesliga top three. For once however, it wasn’t Timo Werner or Patrik Schick in the goals, but winter signing Dani Olmo, who stole the headlines.

Die Roten Bullen lined up in a nominal 4-2-2-2 formation which when on the attack in reality became a 4-2-4 with both Olmo and Marcel Sabitzer encouraged to push forward and join the strikers. Werner would be able to drift wide on the left, with Sabitzer comfortable on the right. Olmo, as we will see could time his runs well to take advantage of the space in the centre playing as an advanced number 10 in effect. 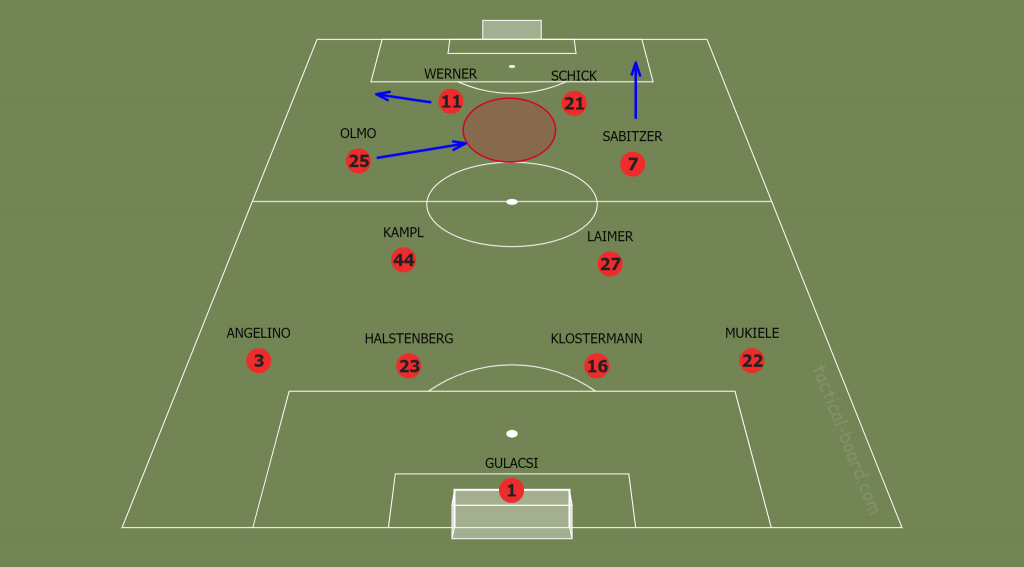 The Spaniard scored his first goal for the club on matchday 29 against Köln and had a pretty decent scoring record during his time with Dinamo Zagreb with 18 goals in 74 appearances.

The opening minutes of the game were certainly not dull. The home side began very brightly and were given a penalty after just 6 minutes when Peter Gulacsi brought down Munus Dabbur. With the ball on the spot however, referee Tobias Welz overturned his decision after VAR assistance for a handball in the build-up from Steven Zuber.

Almost straight from the restart Leipzig were in front. Having combined well with Konrad Laimer in the middle, Olmo fed the ball out wide to Nordi Mukiele and then continued his run. With Werner, Schick and Laimer all covered, the French defender did well to spot the slightly delayed run of Olmo, who wasn’t tracked by Dennis Geiger. A sidestep of Florian Grillitsch, a toe-poke finish later and Leipzig led 1-0. 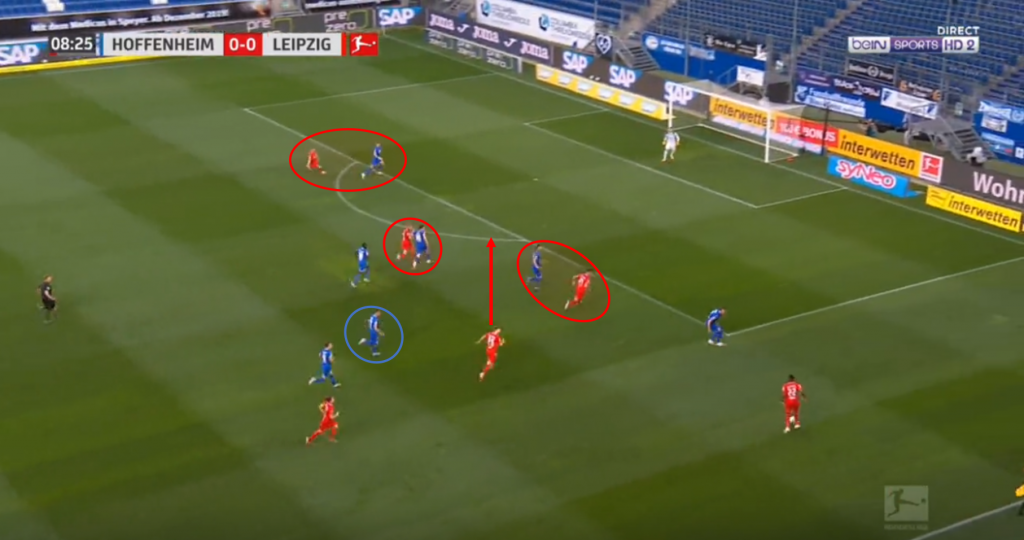 Two minutes later and the 22-year-old former Barcelona youth player once again took advantage of the space in the centre and a perfectly timed run to double Leipzig’s lead. Marcel Sabitzer had the vision to spot Olmo rather than attempt to find either Werner or Schick in the middle and minutes after stunning Hoffenheim, he did it again. 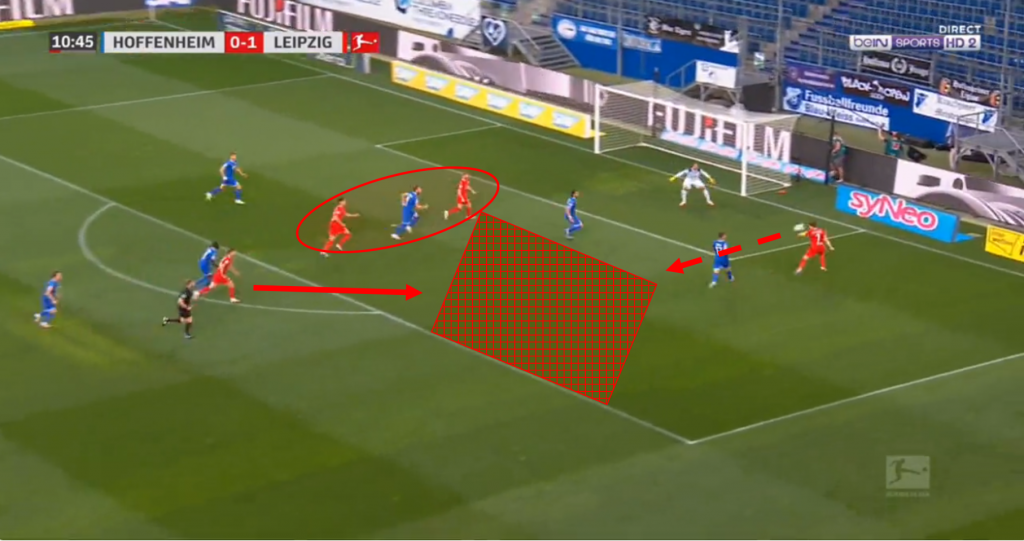 Hoffenheim actually played well for large spells of the game and really should have made more of the chances that came their way, but Olmo’s quick-fire double was enough in the end to seal all three points for Julian Nagelsmann on his return to his former club.

In only his ninth Bundesliga match, Olmo netted his second and third goals. It really was all about the goals for the Spaniard with two shots on target from the three he took. His efficiency in the opening 12 minutes really hurt Hoffenheim.

He only had a 47% pass completion rate in the game and only completed 3 of his 7 passes in the attacking third. He did complete one take-on and was fouled three times.

“It feels great to bag my first brace for RB Leipzig. But the win is more important, I’m more pleased about that. It gives us a lift ahead of our remaining games. We want to win every game, take nine points and reach the Champions League!”

Julian Nagelsmann: “Before the game I told my staff that Dani would start as our number 10 for the first time this season and perhaps he would score. The first two chances he scored so we are happy with his performance today. It was three massive points today. Now we have the chance to secure Champions League football. We want to take that chance!”

Hoffenheim coach Andre Breitenreiter celebrates his 49th birthday on Sunday and the ideal present would be three Bundesliga points at the Olympiastadion. Looking to spoil his special day however are a Hertha Berlin side full […]

Julian Nagelsmann and the Rotation Conundrum

A favourite German phrase of mine is ‘der Qual der Wahl’- spoilt for choice. A deeper look at the etymology though translates ‘Qual’ as torture, agony torment. The agony of having to make a decision […]