Another week, another defeat and the woeful Rückrunde continues for Schalke as their winless streak extends to 15 matches. Talking of woeful, that would seem a very apt description of their defending against Wolfsburg, which saw them ship four goals- a defensive masterclass it certainly wasn’t.

With Benjamin Stambouli, Salif Sane and Jean-Clair Todibo still out injured, David Wagner lined-up at the Veltins Arena with a back four of Jonjoe Kenny, Ozan Kabak, Bastian Oczipka and Juan Miranda with Weston McKennie and Alessandro Schöpf operating in front of them. 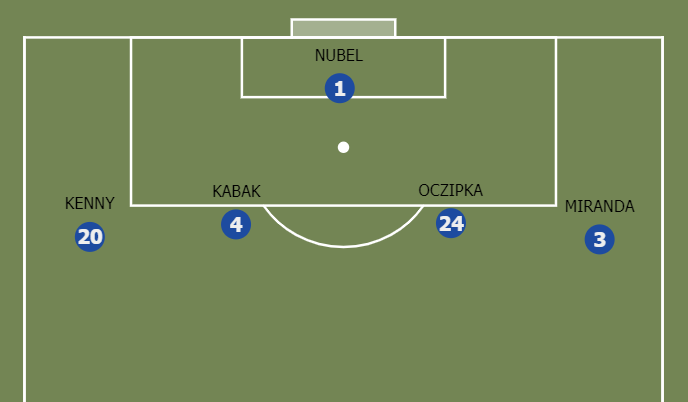 Having conceded 14 goals in 7 games since the Corona virus restart, keeping things tight at the back was going to be tricky against a Wolfsburg side gunning for a European place next season and so it proved.

It took the visitors just 16 minutes to make the breakthrough with Kabak and Miranda struggling to deal with Daniel Ginczek and Wout Weghorst following a Renato Steffen cross from the left. Weghorst easily outmuscled Kabak, Miranda looked lost after blocking Ginczek’s effort, and the Dutch striker had all the time and space he needed to turn and fire past Alexander Nübel.

With 62% possession in the first half, it was a relatively easy opening 45 minutes for die Wölfe, who previously hadn’t won in Gelsenkirchen since 2009.  By the hour mark however they were 3-0 up and clearly about to rectify that record.  Wolfsburg bypassed the Schalke midfield with ease with Renato Steffen advancing with the ball. Schalke looked to have enough numbers back to cover, but a well-timed run from Weghorst sliced them open with ease. Here, Oczipka was too focussed on the ball (Steffen) and not with the run of Weghorst behind his right shoulder. Kabak could have covered, but at the crucial moment delayed his step to try and force an offside that wasn’t there.

Three minutes later and they were sliced open again with Wolfsburg showing an alertness completely lacking from the Königsblauen. With Maxi Arnold standing over a free kick in an advanced position, Ginczek made a run for him. Miranda actually pointed to the German’s run, but nobody reacted, and he latched onto a ball he had no right receiving based on his starting position. There was no reaction from a Schalke defender and when his shot came back off the post, Kevin Mbabu reacted quickest to the rebound, it was 3-0 and game-over.

The fourth goal came via a poor punched clearance from Nübel following a corner. His half-arsed punch only landed at the feet of Joao Victor on the edge of the box and the Brazilian fired home with a decent finish. Schalke conceded 21 goals in the Hinrunde in 17 matches, but have already let in 33 in the second half of the season with one game still to play. Only Union Berlin and Paderborn have a worse defensive record in the Ruckrunde.

Alessandro Schöpf: “Wolfsburg were better in the decisive moments today. We made too many mistakes at key stages and gifted them goals. We defended their set-piece goals particularly poorly. We were also lacking a bit of luck. We can’t find our form from the Hinrunde at the moment. A lot of quality players are out right now, who would help us. There are always tough situations in life. We need to learn from this one and get out of it soon. I hope that we can win our last game of the season.”

Daniel Caligiuri: “We’re all very disappointed. We wanted to end our bad run in our final home game of the season. Wolfsburg were deserved winners. I’m annoyed about the set-piece goals – we had a clear plan for dead balls. You will concede goals if you’re not wide awake. What’s going on in our heads plays a big role – it can certainly hinder us. We can’t think so negatively in the future, but it’s really difficult for us right now.”

David Wagner: “We faced a team today who are playing at a higher level to us at the moment. They deservedly won the game. We didn’t start well, went 1-0 behind and therefore went into the break behind. We had a good period, could have equalised through Caligiuri, but then we were 4-0 down in what felt like five minutes.”

It all looked so positive for Schalke under David Wagner with just over one third of the season played. Matchday thirteen’s 2-1 win at home to Union Berlin put the Königsblauen third in the table […]

Eight of the DFB Pokal second round matches were played out on Tuesday with the usual cup excitement of lower league teams taking on their more glamorous opponents. So, what were the takeaways from Tuesday’s […]

Jörg Berger and the Stasi – A Story of Betrayal and Perseverance

It’s match day 10 of the 1996/97 Bundesliga season. The Parkstadion in Gelsenkirchen is packed to the rafters once again, but the fans aren’t in a good mood. During the speaker’s line up call the […]