Borussia Dortmund now have a triumvirate of Belgians with the signing of right back Thomas Meunier on a free transfer from Paris St Germain. The 28-year-old joins compatriots Axel Witsel and Thorgan Hazard at the Signal Iduna Park but his arrival will only add to speculation that Achraf Hakimi’s time at the club is at an end.

When it became known that defender Thomas Meunier was not going to sign a new deal at the Parc des Princes and would be available on a free this summer, a lengthy queue of suitors formed with Manchester United, Liverpool and Tottenham amongst them. The fact that BVB managed to seal the deal is a big boost as the club already start to plan for next season’s assault on Bayern Munich’s Bundesliga hegemony.

“Thomas Meunier is a player who has demonstrated his quality at the highest level in the Champions League and in the national team over a long period of time and will really benefit us with his experience,” said sports director Michael Zorc on Thursday when announcing the transfer.

The right back made 14 starts for the Ligue 1 champions this season as he competed with Thilo Kehrer and Colin Dagba providing just the one assist. He signed for the Paris giants back in 2016 from Club Bruges but is now looking forward to a new challenge in the Bundesliga having won three French league titles.

Unlike the Bundesliga, France’s Ligue 1 season was cut short by the Corona virus crisis with PSG declared champions. This season Meunier averaged 1.8 tackles, 1.4 interceptions and 1.1 clearances per 90 minutes of football in the league and the UEFA Champions League. He has a pass completion rate of 85.3% in league football which shows just how well he can distribute the ball.

Meunier is an experienced, well-rounded player with the double string to his bow if defending and attacking. He has the pace to get forward and can deliver inviting crosses into the opposition penalty box.  He reads the game tremendously well which helps him pull off some vital interceptions and last-ditch clearances. He is comfortable as an orthodox right back or as a wing back when in front of a back three (as Lucien Favre began to favour this season).

He is a quality player, but not a like-for-like swap for Achraf Hakimi. And that is the big question at the moment- does this signing spell the end of the Moroccan’s two-year loan at Dortmund? 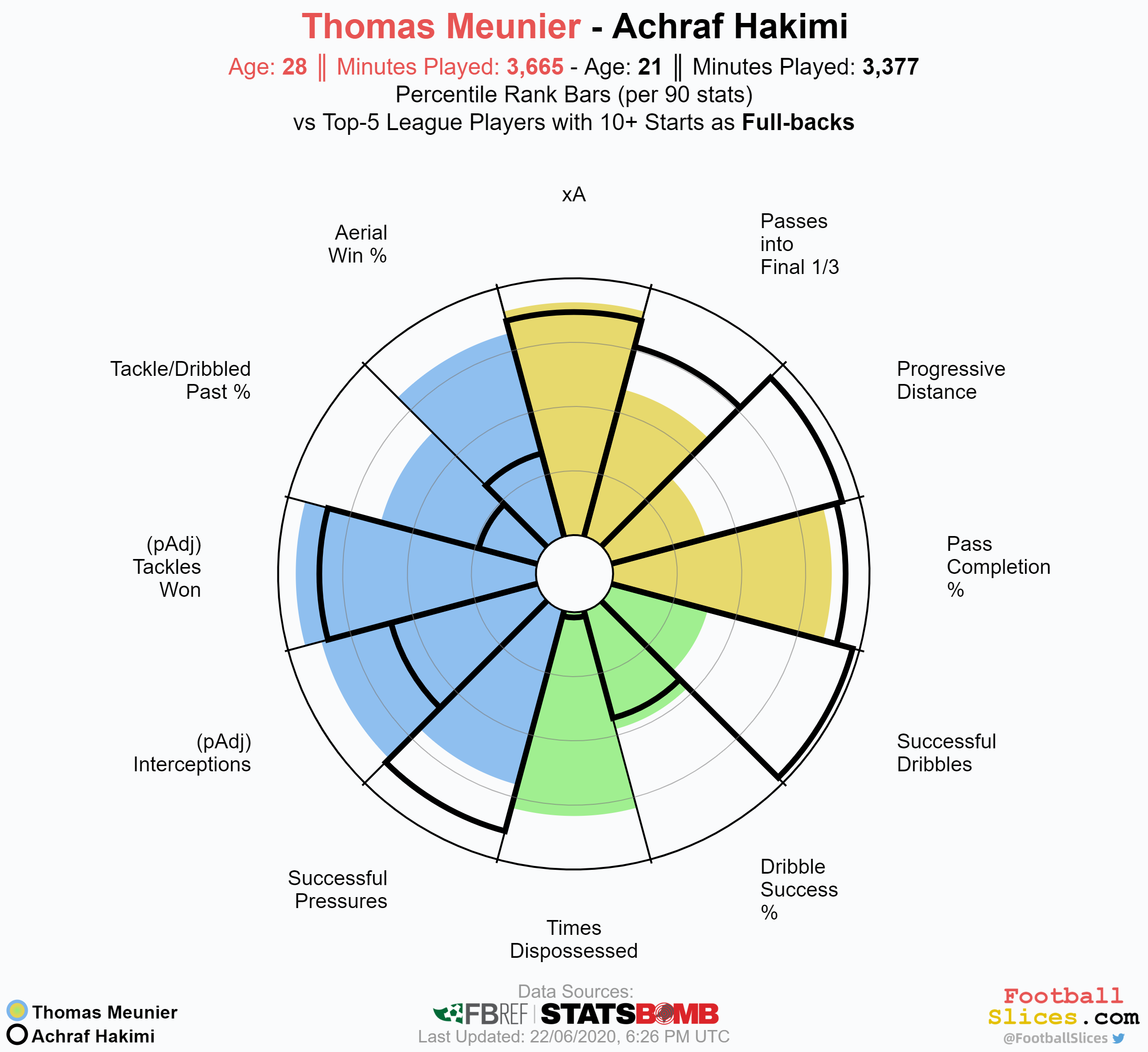 Having impressed hugely with the Schwarzgelben over the past two seasons and becoming one of the most dynamic fullbacks in the league, it looks like he favours a return to parent club Real Madrid where he will try and win over Zinedine Zidane and go head-to-head with Dani Carvajal.

“Borussia Dortmund plays exactly the football that I want to play exciting, authentic and natural” Meunier explained. “BVB is known for their enthusiastic fans and the atmosphere during the game with Paris at Signal Iduna Park really influenced my decision. I am ambitious and, like with Bruges and Paris, I would like to win titles with Dortmund.”

A mere 24 hours after clinching Champions League qualification, it seems that Manchester United are about to get serious in their quest to sign Jadon Sancho from Borussia Dortmund. Fresh from securing the €66 million […]

Is the ‘Mentality’ Question Raising its Head Again at Dortmund?

It will come as no surprise at all when questions are asked when you let a two-goal lead slip in the 89th minute and end up losing the game. With Borussia Dortmund doing just that […]

Five Questions Ahead of Bundesliga Matchday 9

It’s been another ‘Englische Woche’ of European action, and hot on its heels comes another round of exciting Bundesliga matches. Union wobbled last week, Bayern surged, while Gladbach took the day off. Here we take […]