Roberto Baggio earned the nickname ‘The Divine Ponytail’ during the 1990’s with Juventus and Italy. Could RB Leipzig’s midfielder Kevin Kampl be about to become the ‘Divine Top-Knot’ for Die Roten Bullen?

The Slovenian midfielder has endured an injury-hit season at the Sachsen club, but news that he has just signed a new contract will go down very well with both the fans and coach Julian Nagelsmann, who has quickly come to appreciate the quality the 29-year-old brings.

Leipzig paid €20 million to sign Kampl from Bayer Leverkusen in 2017 and since then, he has gone on to play 89 games for the club with six goals and 15 assists to his name. This season an on-going ankle issue has kept him out for most of the season, but his performances since the Bundesliga restart have been hugely impressive.

His contract was due to expire in 2021, but the club moved quickly to tie him to an extended deal until 2023. “I’m really pleased about my contract extension” Kampl revealed. “My family and I feel right at home here and Leipzig has become a second home to us. Despite my injury, the club made it clear that they would like to keep me for the coming years, and I think I’ve paid back their support since my return. I’m excited for the future, there’s a lot we want to achieve, and I want to play my part as an experienced man in a young and talented team.”

The club were also pleased to have secured his services for an extended period with sporting director Markus Krösche saying, “Kevin is one of the real leaders in our team, both on and off the pitch. He has shown since returning from his long-term injury how important he is for us and how he embodies the way we want to play football.

“We’re really happy that he has extended his contract early for a further two years and that we’ve managed to secure enough key player’s future here.”

So why is Kampl so important to Leipzig. He has been limited to just eight starts this season with further substitute appearances. Both of his assists this season have come since the corona virus restart as did one of his two goals (against Düsseldorf).

His ability to win the ball back when the opponent is exerting pressure is excellent and his active defending is a huge benefit to the team. Going forward he’s very creative and provides options- be it a killer pass or simply looking for the finish himself. 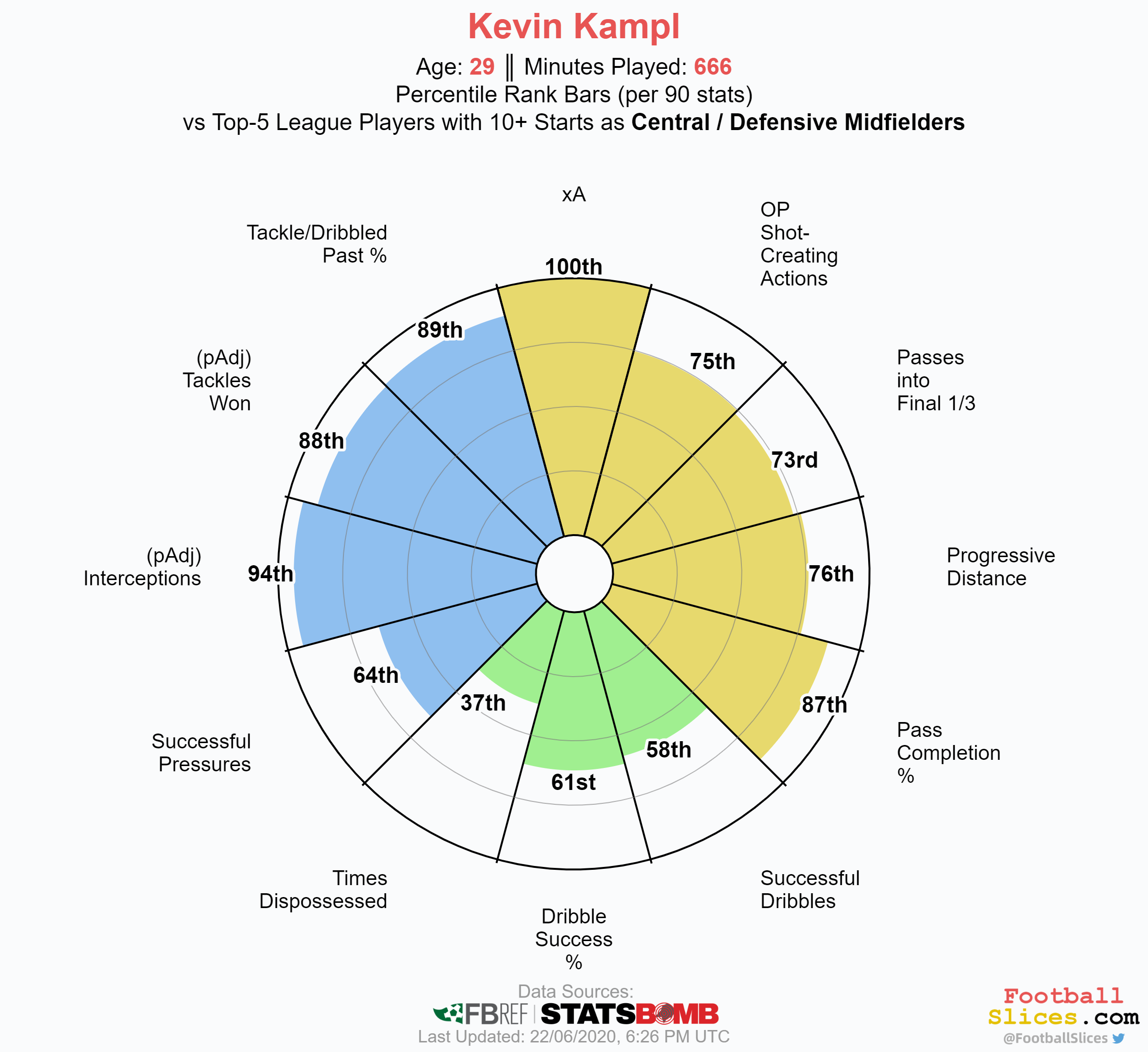 With only 666 minutes to his name thus far, his stats have taken a hit numbers-wise, but when you look at Kampl’s per 90 stats, his ability stands out straight away. Amongst defensive midfielders in the top five leagues he ranks in the 100th percentile for xA, and in the 94th for interceptions. He’s in the 88th percentile for tackles won and the 87th for pass completion. Put simply he wins the ball back and then goes forward to create.

His first game back from injury against Freiburg highlighted the impact he can have. He provided a great assist for Ademola Lookman that went begging before setting up Yussuf Poulsen for their equaliser. He led the team with distance covered (11.7km) won 17 challenges and had a 92% pass completion rate.

If he can stay injury free next season, he looks set to become a vital part of Julian Nagelsmann’s second year at the Red Bull Arena.

The flow of talented footballers from Austria to the German Bundesliga is a long-established pattern with both geography and language playing a huge role. Recent years however have seen an almost constant arrival of players […]

The winners Thomas Müller With Robert Lewandowski not in the squad, it was down to Thomas Müller to carry on the work of the deadly duo against Köln. The Bayern forward opened the scoring from […]

As the legendary former national team trainer once said: “Nach dem Spiel ist vor dem Spiel” (after the game is before the game). One game finishes, and another arrives hot on its heels. Matchday 11 […]