There has been no shortage of the X-factor in the Bundesliga this season with some of Europe’s top players vowing fans in the German topflight, be it defenders, midfielders, or strikers.  Whether it is the goals of Robert Lewandowski, the creativity of Thomas Müller or the defensive guile of Mathias Ginter, quality is never in short supply.

There are however a number of players, who for whatever reason just haven’t cut the mustard this season and have failed to live up to their prime billing. Here is the Bundesliga Fanatic’s flops XI of the season. 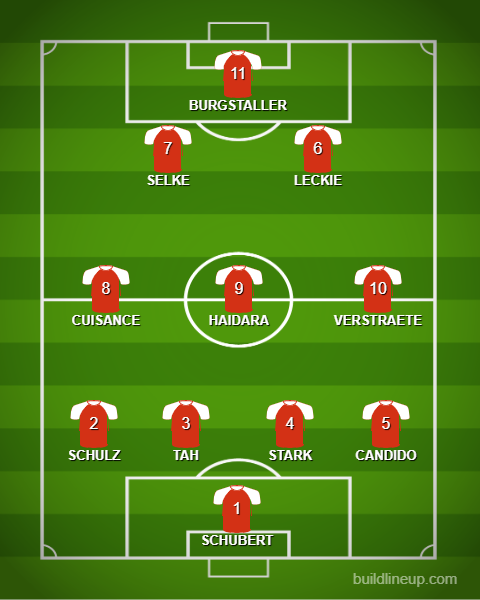 This might seem a bit harsh on the youngster having had to play behind such a poor Schalke back line in the Rückrunde, but he hasn’t done himself too many favours as he seeks to become the club’s number 1 next season.

Alexander Nübel’s bombshell in January that he was joining Bayern saw him dropped and Schubert installed between the posts by David Wagner with the intention of keeping him there until the end of the campaign. However, a number of blunders leading to goals (two versus Bayern in the 5-0 loss, the Revierderby and against Düsseldorf) led to Nübel being recalled.

Rumour has it that the Königsblauen are looking for a safer pair of hands next season with Everton’s U-18 keeper Daniel Rose already signed and Zack Steffen, Mark Flekken, and Sven Ulreich all linked.

Having appeared in the Champions League with Hoffenheim, progressed under Julian Nagelsmann and established himself in the German national side, the signing of fullback Nico Schulz seemed a no-brainer from Borussia Dortmund to go alongside the more extravagant acquisitions of Julian Brandt and Thorgan Hazard.

Whilst the two attacking players enjoyed a good debut season at BVB, Schulz has seemingly sunk without trace and there is no guarantee he will be around next season. With just seven starts this season, the €25.5 million signing has been kept out of the side by poor form, Raphael Guerreiro and Lucien Favre’s switch to a back-three which hasn’t helped his cause either.

It wasn’t too long ago that Leverkusen were fighting off interest from some of Europe’s elite clubs for the signature of Jonathan Tah. This season the giant centre back has seen his place taken at the heart of the Werkself back line by Edmond Tapsoba and even Aleksandar Dragovic has been preferred when Peter Bosz’s has opted for a three-man back line recently.

The club stress that his future remains at the Bay Arena, but first-team football will be needed. “He has won a higher percentage of his duels than any other player in the squad and has shown time and again that he can be an important factor with his speed and ball-winning ability. I believe that ‘Jona’ has the potential to improve further. But in the first half of the season, everyone here had room for improvement – not just ‘Jona’,” Rolfes said.

After missing out previously due to injury, Hertha Berlin defender Niklas Stark finally made his debut for the German national team in November in a Euro 2020 qualifier against Northern Ireland.

The 25-year-old was a near ever-present for the Alte Dame in the Hinrunde but has fallen down the pecking order in the Rückrunde with new trainer Bruno Labbadia opting for Jordan Torunariga and Dedryck Boyata as his first-choice pairing. He has stressed his intention to stay and fight, but a €20 million release clause expiring on June 30th might change that.

‘Luan who?’ I hear you ask. Aside from the arrival of coach Julian Nagelsmann in Leipzig last summer, the two main signings from Die Roten Bullen were Brazilian fullback Candido from Palmeiras and Hannes Wolf from RB Salzburg. Neither have worked out.

Dubbed the ‘new Marcelo’ and costing €8 million, he failed to impress, made only three appearances for the U-19 side, and was loaned to Brazilian side Red Bull Bragantino until 2021.

The list of players to have made the move from Red Bull Salzburg to RB Leipzig (no connection at all?) has been both lengthy and successful. Marcel Sabitzer, Naby Keita. Peter Gulacsi, and Konrad Laimer amongst others, but one name missing from that list so far is Amadou Haidara.

The Mali midfielder has certainly not lived up to the label of Naby Keita’s successor at the Red Bull Arena and has been limited to just five starts this season under Julian Nagelsmann and has the lowest Kicker rating of any of the RB midfielders.

After engineering a move away from Borussia Mönchengladbach in the summer, few Fohlen fans will have any sympathy for French midfielder Cuisance, who has struggled to make any impact at Bayern this season. Just three league starts, and a total of 217 minutes is not what he would have been expecting when signing for the Bavarians.

He is clearly a talented player, but when given a chance this season, he has looked a little desperate to impress and has been error prone (overhit passes/ wayward shots). Reports claim a trio of French sides are looking to offer him more first-team action than he’ll be getting at Bayern.

When you arrive in the summer and then find yourself loaned out before the end of the campaign, you know you’ve had a bad season. The €4 million midfield signing from Gent was limited to just seven starts and provided just one assist with no goals. He started well under Achim Beierlorzer but confessed to “not enjoying” the football played under his successor Markus Gisdol.

“Birger wants and has to play like any football professional. We couldn’t give him that, so it is better to be honest with each other and to find a good solution” Köln said in a statement.

That solution involves a loan to Antwerp, who have the option to buy at the end of next season. You win some, you lose some and in this case the Billy Goats lost.

Hertha may have gained from the signings of Dodi Lukebakio, Matheus Cunha, and Krzysztof Piatek, but Australian forward Leckie has been the principal loser from their arrivals. This season has seen the 29-year-old make just the single start and amass just 195 minutes of first-team action. In the final year of his contract, a departure from the Olympiastadion looks on the cards.

The fact that I have scored as many Bundesliga goals this season as Guido Burgstaller says a lot. Goals (the lack of) have been a real issue for David Wagner’s side this season and the 31-year-old Austrian failed to find the back of the net in his 21 appearances (13 starts).

Michael Gregoritsch only scored one and Ahmed Kutucu three, but it’s poor Guido who unluckily makes it into the flops of the season (could he have been joined by the entire Schalke side?)

One downside of Werder Bremen avoiding relegation this season is the fact that they would then have to pay Hertha Berlin €15 million for Davie Selke. The 25-year-old has huffed and puffed a lot since returning for a second spell at the Weser Stadion, but no goals have been forthcoming.

Its not as though he’s been firing blanks in an otherwise awesome team, but he does warrant his place in this season’s Bundesliga flops XI.

About Mathew Burt 383 Articles
Former writer at Goal.com and JustFootball, I've been doing my thing for Bundesliga Fanatic since 2015. A long-suffering Werder Bremen fan and disciple of the Germanic holy trinity...Bier. Wurst und Fußball

What Has Gone Wrong at Schalke?

The Rückrunde began so well for Schalke with a win over Borussia Mönchengladbach, but since then the Königsblauen have seen their season begin to fall apart with a winless run of nine games. Just what […]

Why Werder Bremen’s Struggle Is Worrying For the Bundesliga

And so it all comes down to the final matchday. Werder Bremen have to beat Cologne while hoping Fortuna Düsseldorf doesn’t get a result against Union Berlin in their quest to secure Bundesliga safety. Even […]