The final weekend of the Bundesliga season certainly wasn’t lacking in excitement with Champions League places up for grabs and two sides battling to stay in the league. So, who were the winners and losers from matchday 34?

I will try to remain as impartial as possible here, but what the hell just happened? Werder went into the final game of the season needing the performance of their season as well as Fortuna Düsseldorf to hit the skids against Union Berlin. And that is exactly what happened.

Even the most optimistic Werder fan must have already been contemplating life in the 2. Bundesliga ahead of their home clash with Köln. What took place was therefore beyond their wildest dreams as Florian Kohfeldt’s men produced a 6-1 win to secure safety (for now) and the chance to take part in the promotion/ relegation play-off.

A stunning first half saw them race into a 3-0 lead with goals from Yuya Osako, Milot Rashica and Niklas Füllkrug. Then came the news that Fortuna were losing. Three more second half goals only interrupted by Dominick Drexler’s consolation put the Grün-Weißen into dreamland. They had jumped from 17th to 16th and given themselves at least a chance of avoiding the drop.

Party time in Bremen. Now all that remains to be seen is whether their play-off opponent is Northern rival Hamburg or Heidenheim.

Did someone order a ‘back to his best’ Andrej Kramaric? Well if you did, your order is ready to collect from the Signal Iduna Park in Dortmund. The final game of the season was a dead rubber in some regards with BVB guaranteed second spot and TSG assured of a place in Europe next season, but Andrej Kramaric wasn’t going to take things easy.

The Hoffenheim striker hit four goals to stun BVB and completely outshine Erling Haaland. “It was simply a super feeling to score four goals and thus finish in sixth place” he said after. “It’s difficult to find words to describe it; things like that don’t happen often in your career. Above all, I’d like to thank my team-mates. We’re very happy to be in the Europa League. I didn’t know that it was the first time a player has scored four goals in Hoffenheim’s history. It’s obviously an unbelievable feeling to make history. It wasn’t an easy season for me due to the injuries and that makes it feel all the sweeter.” 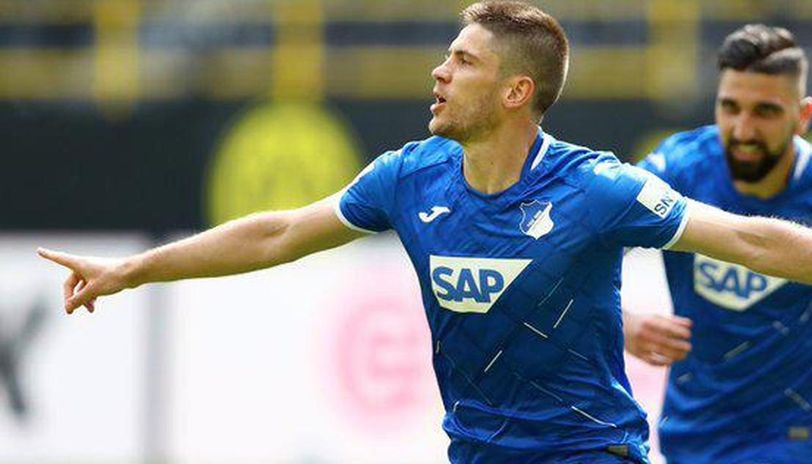 It was already a record-breaking season for both Lewandowski and Müller and the duo added to their already impressive tally of goals and assists in Bayern’s 4-0 win over Wolfsburg. In doing so, they also took the club to the sought-after 100 goals for the season.

Müller provided the assist for Kingsley Coman’s early opener and added the fourth himself in the 79th minute- seven minutes after Lewandowski had dispatched a penalty for his 34th league goal of the season. The win over Wolfsburg completed an almost perfect Rückrunde for Hansi Flick’s side with 16 wins and one draw.

The final Champions League spot was won by Gladbach after they beat Hertha Berlin 2-1 with goals from Jonas Hofmann and Breel Embolo. It is the first time since 2016-17.

Manager Max Eberl was understandably happy with the club’s achievement. “Three weeks ago, everyone was saying that Leverkusen would qualify for the Champions League when they moved above us” he said. “We said to ourselves, if we can win our last three games, then there’s a chance that Leverkusen could drop points.

“That happened last weekend, with Leverkusen losing at Hertha and us beating Paderborn, putting us in the perfect position going into today. We have been very consistent throughout the season and haven’t been fazed by setbacks, so I think we deserve to finish fourth.”

The club were also able to give the departing Raffael a brief cameo appearance to say goodbye.

Somebody had to finish in 17th and be automatically relegated and so it is that that unwanted honour falls on Fortuna. They went into the weekend with a two-point advantage over Werder and knew that avoiding defeat at Union was the key- no matter what Bremen achieved. Destiny was in their own hands, but a poor performance was punished with three Berlin goals and combined with the result from the Weser Stadion, Düsseldorf switched places with Werder in the table and fell through the relegation trapdoor.

“I am incredibly sorry for the fans and the club that after a strong fight for many weeks and months we have not rewarded ourselves with the chance to stay in the Bundesliga” trainer Uwe Rösler said after. “I have to thank the team- they have given everything since I came here.”

Everything maybe, but sadly for Fortuna, not quite enough. 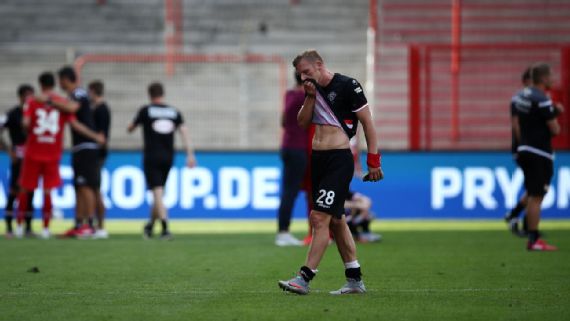 It really wasn’t the finale to the season that the Schwarzgelben were hoping for. BVB suffered their worst home league defeat since 2009 (5-1 to Bayern) as Hoffenheim blew them away at the Signal Iduna Park.

Lucien Favre handed a first start to Leonardo Balerdi with Mateu Morey and Gio Reyna also in the stating XI. 2-0 down at half-time, the coach introduced both Achraf Hakimi and Jadon Sancho in the second period, but to no avail as the guests from Sinsheim added two further goals.

Midfielder Axel Witsel was at a loss to explain the performance after the game. “I can’t explain it. We weren’t good, weren’t aggressive. Hoffenheim had a lot more motivation. We didn’t want to end the season like this because that’s not who we are. Today was a bad day, now we need to forget it quickly.

“Our work off the ball simply wasn’t good enough. We all need to defend together, but if you’re in a match where only a few players are running and defending, it’s difficult to win the game.”

It is very premature to be thinking about the first game of next season, but one thing is for sure- Josh Guilavogui won’t be playing as he will be suspended. Wolfsburg’s captain ended the season with a heavy loss and to make it worse was sent off by referee Patrick Ittrich for two yellow cards in the second half.

It is all smiles at the Borussia Park right now, but the opposite is the case at the Bay Arena. European football has been secured next season, but it will be the Europa League and not the Champions League for the Werkself.

Their 1-0 win over Mainz wasn’t enough to overhaul Mönchengladbach and fifth place goes to Peter Bosz’s side. “It is a little strange that we have to be disappointed with 63 points because that is not enough for the Champions League” Bosz mused after. “It’s five points more than last year, but congratulations to Gladbach!”

It seems only right that the season and the ‘Winners and Losers’ series ends this season with Schalke. The Königsblauen extended their winless run in a terrible Rückrunde to 16 games with an abject 4-0 defeat at Freiburg.

“Our young team started the game well and had a few good chances which could have put us ahead – they probably should have. Freiburg were then incredibly clinical” coach David Wagner explained. “We didn’t offer much of a fight in the second half, so we deserved to lose.”

Thank god the season is over for Schalke, who have gone from 5th in the table at the halfway stage (level with Dortmund) to 12th at the end having collected just nine points in the Rückrunde.

The regular season may be over, but that doesn’t stop the talking points arriving and Paris St Germain sporting director Leonardo has provided one by taking a swipe at German clubs for their poaching of […]