The Bundesliga team of the season could in theory just be the Bayern Munich line-up, with Jadon Sancho or Leipzig’s Timo Werner thrown in for good measure. Here we take a slightly different approach and construct a team of the season based on players outside of the top four finishers. 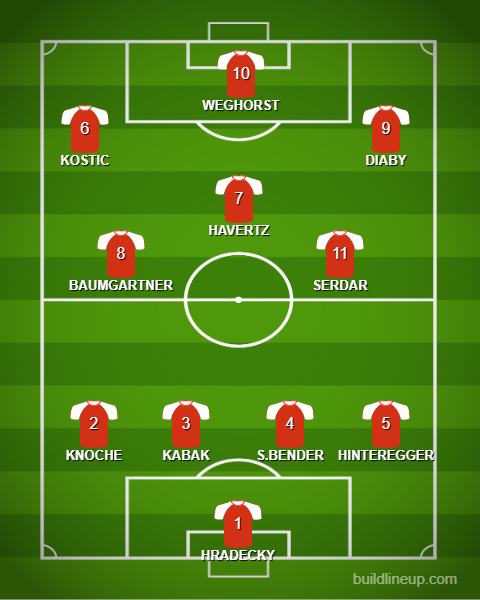 Bayer Leverkusen’s keeper Hradecky would have a genuine shout to be named the league’s best keeper regardless of the Werkself’s final league position. Aside from Robert Lewandowski, Thomas Müller and Leon Goretzka, the Finnish custodian was the top ranked player in Kicker-Sportmagazin’s season ratings.

He was an ever-present for Peter Bosz and kept ten clean sheets (only Roman Bürki and Manuel Neuer had more). His side may have agonisingly lost out on the final day in the race for the Champions League spot, but the fact that they were even in contention has a lot to do with the superb last line of defence Hradecky provided.

Perhaps odd to see a Schalke player in the best side of the season considering the appalling Rückrunde they endured, but Kabak was one of the few positives to come out of this season at the Veltins Arena.

Injury problems kept him out of the side until early November, but he made an instant impact scoring in successive games against Augsburg and Fortuna Düsseldorf. Aged just 20, he has already shown that he can be the cornerstone of the Schalke backline.  Even in the midst of their nightmare season, he contributed three goals and won over 70% of his duels.

31-year-old Sven Bender continued to excel at the heart of the Leverkusen defence with his reading of the game and his ability to play out from the back. His pass completion rate of 95% from open play was the joint highest in the league (along with Alex Witsel and Nico Elvedi). He won the second highest number of aerial duels in the league with 154 and was 6th in the league for clearances made (169).

He still has the DFB Pokal final to look forward to and a round of 16 Europa League clash with Glasgow Rangers.

After the season he’s just had, Wolfsburg must be kicking themselves that they were not able to negotiate a new contract for the defender. He leaves on a free transfer having been the club’s best and most consistent performer this season as they qualified for the Europa League.

After 15-years, he’s off to pastures new with Eintracht Frankfurt and Glasgow Celtic possible suitors. Whoever he signs for, they’re getting a top defender based on this season’s displays.

The Austrian cult hero earns his following on the pitch and this season has once again seen ‘Hinti’ stand out for his defensive and attacking talents.  He ranked 9th in the Bundesliga for tackles won but was also a threat going forward.

He scored eight times overall in the Bundesliga (including three against Bayern over two matches) making him the highest-scoring defender in Europe.

Another Austrian, who has enjoyed a breakout season in 2019/20 at Hoffenheim. Things started slowly for the 20-year-old but six goals in the Rückrunde helped TSG to Europa League qualification.

He is versatile enough to play across a number of positions such as left wing, centrally as a striker or as a number 10.

Let’s hope the Bundesliga has not seen the last of Kai Havertz. Quite simply developing into a world-class players. 12 goals this season and 6 assists. He does all his talking on the pitch, so we don’t have to. Sadly Leverkusen’s failure to qualify for the Champions League means he may be off to pastures new (please not Bayern!)

In the absence of Ante Rebic, Sebastian Haller and Luca Jovic, Filip Kostic really stepped up to the plate for Frankfurt this season to provide much of their attacking impulse. His delivery of crosses from the left was a major source of danger for the Adler– he provided a league high 383 (over 100 more than his nearest rival).

Kostic was ranked third behind Jadon Sancho and Alphonso Davies for successful dribbles, ranked second for touches in the attacking third, and ranked third for progressive distance on carries behind Achraf Hakimi and David Alaba.

Another Schalke player? What’s going on? Like Ozan Kabak, Serdar was another stand-out performer in an otherwise poor Königsblauen season overall. The 23-year-old scored seven goals (six in the Hinrunde) and earned his first call-up to Joachim Löw’s German national side.

His loss towards the end of the season through injury was a huge blow for David Wagner.

The fourth Leverkusen player to make it into the team of the season and deservedly so. His first season at the Bay Arena was a great success with five goals and five assists from the 20-year-old. His pace and dribbling caused defences many problems and he could prove to be another major talent that Paris St Germain have let slip through their fingers.

Wolfsburg’s giant Dutchman hit 16 goals this season with only Robert Lewandowski, Timo Werner and Jadon Sancho scoring more. His aerial ability is obvious (137 duels won) but his all-round play this season has been superb.

He scored all four penalties he took this season and provided three assists. He completed the third highest number of sprints behind Filip Kostic and Achraf Hakimi (921) and ranked second behind Hertha’s Vladimir Darida for intensive runs (2628).

The Winners and Losers of Bundesliga Matchday 2

The winners FC Augsburg Without any disrespect to the Fuggerstädter not many people would have predicted them getting anything from their home clash with Borussia Dortmund, but Heiko Herrlich’s side sprang a huge surprise by […]

In these uncertain times Hertha Berlin have been boosted with another cash injection from their financial backer Lars Windhorst, whose holding company Tennor will pay €150 million in return for raising their stake in the […]

Crisis? What crisis? Bayern Munich sent out a real message to all the doom-mongers and naysayers who were talking of a mini crisis at the club by blowing Bayer Leverkusen away at the Allianz Arena […]