Saturday sees the DFB Pokal final clash between Bundesliga champions Bayern Munich and Bayer Leverkusen at the Olympiastadion in Berlin. It will a strange occasion under the current circumstances, so let’s look back five of the most famous moments from previous finals.

The major shock ahead of the 1973 final was Borussia Mönchengladbach trainer Hennes Weisweiler’s decision to put club legend Günter Netzer on the bench for the final against Köln. Having already announced his departure to Real Madrid and following the death of his mother, the coach opted to leave him out of the starting line-up. At first the midfielder was going to walk out, only to be persuaded to stay by Berti Vogts.

With the score 1-1 at half time Weisweiler intended to send Netzer on, only to be told: ‘No, they don’t need me’. However, going into extra-time still tied at 1-1, the enigma turned around and decided that actually it was time to make an appearance and basically subbed himself on, telling the trainer, “Ich spiel’ dann jetzt” (I’ll go and play now).

The script couldn’t have been better written for Netzer as three minutes later he latched onto a through ball from Rainer Bonhof to slam home the winning goal. The stuff of legend!

Bayern Munich’s ‘Siegeswillen’ (will win) is well known, but perhaps the moment that typifies that spirit the most was the 1982 Pokal final and the player, who typified it above all others was Dieter Hoeneß.

The final wasn’t going well for Bayern as they found themselves 2-0 down at half time to Nürnberg and with Hoeneß having suffered a nasty cut to his head after a clash with Alois Reinhardt in the 13th minute. A 3cm gash had to be stitched at half-time, but the player was adamant he wasn’t coming off.

“I wouldn’t have continued if we’d been in the lead, or if it had been a usual league match. But we were two goals down, and the pain was worth it,” Hoeneß said later. 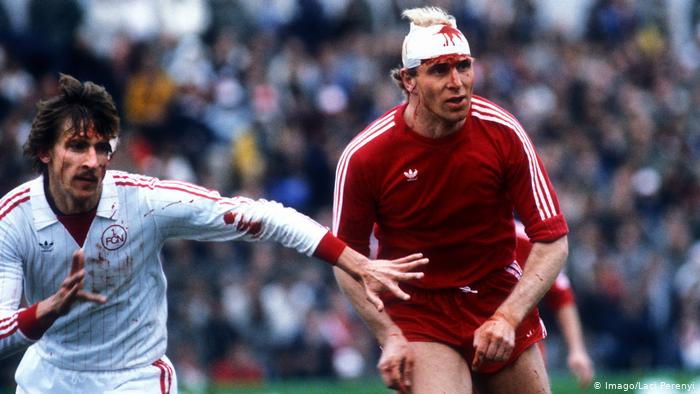 His decision paid off as he played on with a heavily bandaged head making him look like he was playing in a turban. Goals from Karl-Heinz Rummenigge (assisted by a Hoeneß header) and Wolfgang Krauss got the scores level in the second half, before a Paul Breitner penalty put Bayern into the lead (won partly due to a header from Hoeneß!).

There was time for a fourth to wrap up the cup, and it had to be Hoeneß who scored it- with of all things a header in the 89th minute. Following the goal, he was too exhausted to celebrate, so just sat on the floor with his arms raised to the sky.

The script was supposed to see Lothar Matthäus leave Borussia Mönchengladbach a parting gift of the DFB Pokal in his final appearance for the club before his transfer to Bayern Munich. The script even had the midfield talisman firing home one of the penalties in the shoot-out to take the trophy back to the Rhineland.

The problem however was that things didn’t follow the script. The game did go to spot-kicks after a 1-1 draw. The youngster stepped up to take the Foals first penalty and went for the top corner. His effort however skied over the bar and Gladbach went on to lose the shoot-out 7-6.

“That was one of the moments that I would like to erase from my career,” Matthäus told Kicker many years later. “You never intentionally miss a penalty, especially when you have a chance to win the cup. All the more so, when as a child you slept in Gladbach pyjamas.”

A quick look at KFC Uerdingen 05’s honours list doesn’t take long. There is only one thing of note on it and that’s the 1985 DFB Pokal won as Bayer Uerdingen as they were then known. That victory was one of the major cup final upsets of all-time coming as it did against massive favourites Bayern Munich.

In the first final played at Berlin’s Olympiastadion since 1942, Uerdingen were only in their fifth-ever season in the Bundesliga up against the Bavarians, who were league champions and who had won their previous seven finals.

Dieter Hoeneß put Bayern into a 9th minute lead only for Horst Feilzer to level a minute later. The winning goal came midway through the second half with Wolfgang Schäfer. David had indeed slain Goliath.

After two tight 1-0 wins for BVB in the league season, another close encounter was predicted at the Olympiastadion, but the Schwarzgelben went on a goal rampage with Robert Lewandowski hitting a hat trick and Shinji Kagawa and Mats Hummels grabbing the others.

Keeper Roman Weidenfeller had been forced off injured after just 30 minutes but returned from the stadium hospital at the final whistle to collect the trophy.

Five Questions Ahead of Bundesliga Matchday 6

Hot on the heels of the first midweek Champions League action of the new seasons comes the sixth Bundesliga matchday and there are plenty of talking points with coaching changes occurring and threatening to occur, […]

The Winners and Losers of Bundesliga Matchday 2

The winners FC Augsburg Without any disrespect to the Fuggerstädter not many people would have predicted them getting anything from their home clash with Borussia Dortmund, but Heiko Herrlich’s side sprang a huge surprise by […]