Unsurprisingly champions Arminia Bielefeld contribute the majority of players towards the second tier’s team of the season, but talent from elsewhere in the league is recognised. Here are the best performers from yet another fascinating 2. Bundesliga campaign. 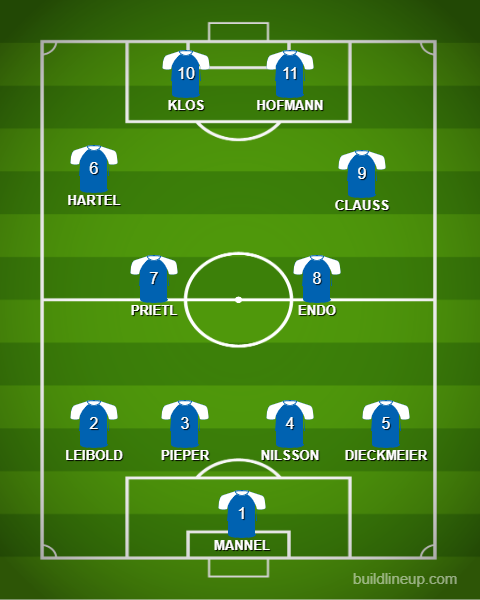 The keeper’s spot was a close-run thing with Bielefeld’s Stephan Ortega, but Erzgebirge Aue’s captain just shades it. A shoulder injury kept him out of the final three games of the season, but up to that point the 32-year-old had been in superb form all season and actually topped the Kicker ratings for all players with an average 2.57.

He saved three penalties this season (one in the 94th minute against Nürnberg to save the win). Strong on his line and in one-on-ones, the Aue veteran was largely responsible for saving a number of points this season.

Hamburg’s season ended on a very sour note, but that shouldn’t take away from the consistently high level of performance delivered by the left back this year. The 26-year-old was an ever-present fixture in the Hanseaten side and provided an outstanding 16 assists this season adding one goal for good measure.

His bursting runs down the left and his precise deliveries were a feature of HSV’s play this season and he didn’t shirk his defensive responsibilities either. The problem now for Hamburg is holding on to the player and he ‘belongs’ in the Bundesliga on this showing and a return to his former club VfB Stuttgart could be on the cards.

The 22-year-old former Borussia Dortmund II centre back formed a very solid partnership with Joakim Nilsson and helped lead die Arminen to the title with the tightest defence in the league- just 30 goals conceded in 34 matches.

He took his chance last season when Brian Behrendt injured his knee and proved an instant hit. His form this season also saw him called up to the German U-21 national team in November.

As above really. The 26-year-old Swede signed in the summer from IF Elfsborg Boras and forged an instant understanding with Pieper. He missed the last few games of Bielefeld’s title run-in after suffering a knee injury against Sandhausen, but looking at the season as a whole, Nilsson was one of the stand-out centre backs in the 2. Bundesliga.

After 294 matches in Germany, defender Dieckmeier finally scored his first goal this season against Sandhausen and then scored his second on the last day of the season against his former club Hamburg to help prevent them from being promoted.

He missed just one game through suspension following his red card against Aue but was otherwise a leader for Sandhausen throughout the season.

The midfield anchor for Bielefeld missed just three matches this season (two through suspension) and provided a level of consistency in front of the back four that gave the rest of the midfield license to get forward. That said, he did score four himself and provided one assist.

It is just as well that Bielefeld were promoted as the Austrian definitely looks Bundesliga-ready and could have been tempted by a ‘bigger’ team had they missed out.

The only downside to Jonathan Clauss’ impressive season was that RC Lens stepped in and snapped him up on a free transfer just after the season finished. Five goals and eight assists from an attacking right back/ wing position was more than a decent output from the 27-year-old.

The Bundesliga is poised to welcome another talented Japanese midfielder after Wataru Endo helped Stuttgart to promotion this season. The 27-year-old defensive midfielder originally joined the Swabians on loan from Belgian side Saint Truiden, but so impressive has he been that the Swabians moved quickly to sign him on a permanent deal.

Trainer Pellegrino Matarazzo recently called him “our most important player”. His role in front of the back four is not purely defensive, but he drives the team and provides the balance required. He scored his first goal in the 3-2 win over Stuttgart on matchday 28.

Hartel’s signing from Union Berlin last summer can now be seen as a masterstroke by the club as he seemed to be the missing part of the jigsaw that Arminia were lacking. He provided the impulse to many of the team’s attacks as well as fourteen assists and one goal.

Top scorer and captain Fabian Klos named him as his ‘Player of the Season’ in a recent interview with Westfalen Blatt and he should know better than most.

It is a team game, but if one man can take a little more of the credit for keeping KSC in the 2. Bundesliga, then that man is striker Philipp Hofmann. His 17 goals and eight assists went a long way to ensuring the club didn’t drop into the third tier.

His hat trick against Bielefeld on matchday 33 combined with his penalty winner against Greuther Fürth on the last day sent KSC fans into raptures. The club will desperately want to keep their saviour, but based on his displays this season, there may be a host of potential suitors lining up for the 27-year-old.

Germany’s version of Leicester’s Jamie Vardy, Klos has been with Arminia through thick and thin for the past nine years winning promotions to the second tier as well as relegation to the 3. Liga.

21 goals this season saw him finish as the league’s top scorer and the 32-year-old will finally get his chance to play in the Bundesliga after staying loyal to the club in the hard times.

Just a few weeks after Bayern Munich triumphed in the Champions League to clinch another treble, the 2020/21 Bundesliga seasons gets underway with the shadow of the corona virus crisis hanging over it. The new […]

Bundesliga Team of the Week Matchday 3

Oliver Christensen (Hertha Berlin) The years of goalkeeping uncertainty at Hertha may be over with Dane Christensen looking a sure bet for the number one jersey for the foreseeable future. He may have ended up […]