It is no secret that Schalke are going to be forced to listen to offers for their star players with the current financial situation at the club anything but healthy. With a self-imposed salary cap being introduced and debts of around €200 million, the Königsblauen are not going to be in a position to turn down sizeable bids that come in.

Weston McKennie has already been mentioned as a possible target for Hertha Berlin and various Premier League clubs, while another key man on the ‘for sale’ list is that of centre back Ozan Kabak, and there is no shortage of interest in the 20-year-old.

Despite having only played a season and a half in the Bundesliga, his value has risen steadily since his move to VfB Stuttgart from Galatasaray in January 2019 for €11 million. His current value (according to Transfermarkt.de) is €29 million.

On joining the Swabians for the 2018-19 Rückrunde, he quickly became the Bundesliga’s youngest regular starter along with Jadon Sancho, with whom he shares a birthday. His qualities were soon apparent even in a Stuttgart side destined for relegation. Speaking at the time VfB’s sporting director Thomas Hitzlsperger was full of praise for the defender. “It’s incredible how worldly-wise he is for his age. It’s astonishing. I see him every day and am amazed at how he mature he is. He wants to know everything; he wants to learn German right away and understand everything. That’s the kind of attitude we need. He’s already a role model, despite his age”

Kabak played 15 times in the Bundesliga (and both relegation play-off matches) scoring three goals along the way. He made 32 tackles, 25 interceptions and 55 clearances. Clearly too good for the 2. Bundesliga, Schalke snapped him up for €15 million and he joined Benjamin Pavard in leaving the club.

This past season with the Königsblauen the 20-year-old Turkish international played 26 Bundesliga matches and again added three goals. He led the club for tackles in the defensive third (42) and clearances (135). Despite his years he already compares very favourably to the best defenders in Europe’s top-five leagues. He is in the 93rd percentile for aerial duels won, the 92nd percentile for tackles won and the 91st percentile for percentage of aerial duels won. His other metrics show good ability with the potential to improve. 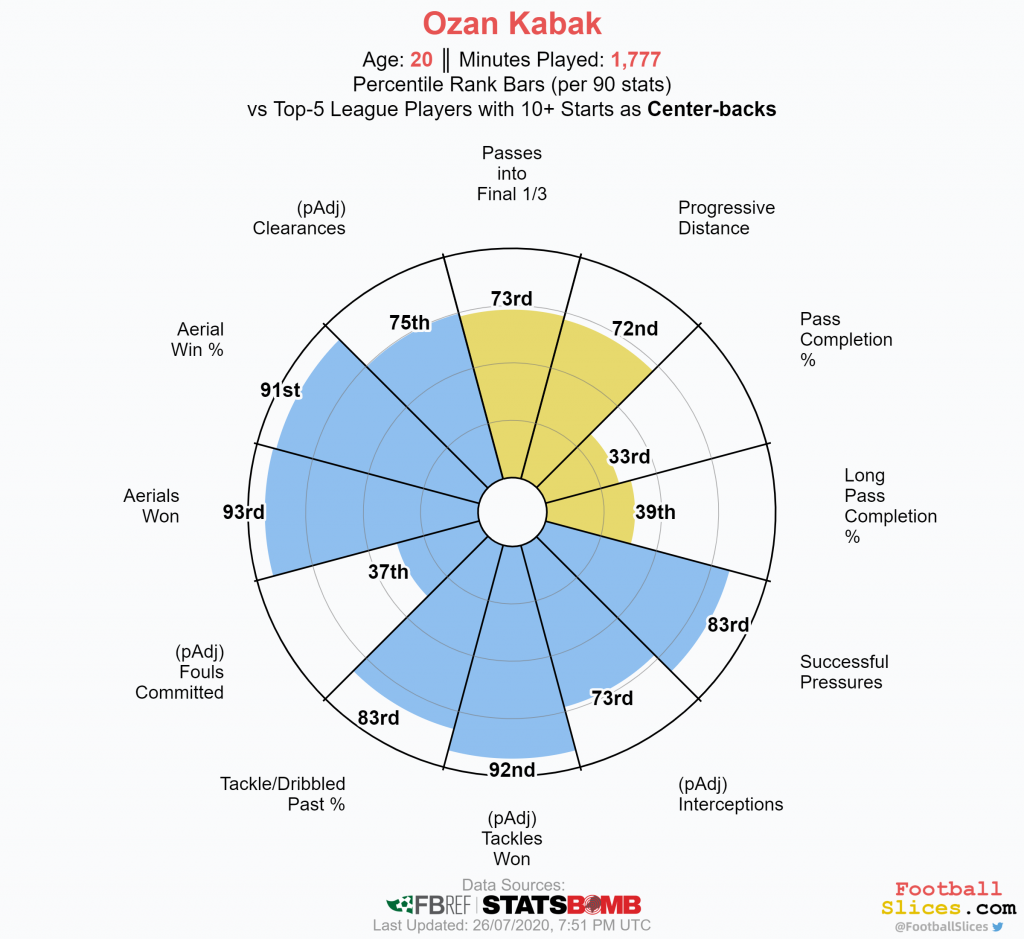 The youngster is not short on ambition either. In an interview with Bundesliga.com earlier this season he revealed his intention to emulate his idol Virgil van Dijk saying, “My personal aim is to become a top defender in maybe two or three years, like Virgil van Dijk. He’s my idol, I really like him. I like his style and how he plays, so I can say he’s my football idol.”

Strangely enough Liverpool are one of the clubs currently being linked with a move for the Schalke centre back as they look to replace the departing Dejan Lovren. Kabak’s contract with Schalke includes a release clause in the region of €45 million, according to Bild, however it can’t be activated until next summer. However, it is believed Schalke would find it extremely difficult to turn down a concrete bid of around €35 million.

Tottenham, Manchester United, and Zenit St. Petersburg are all also reportedly interested in the defensive talent. Fans of the Royal Blues should prepare themselves to lose another of their crown jewels in this summer’s fire sale.

The much-anticipated return of the Revierderby in front of a packed Signal Iduna Park didn’t fail to entertain with hosts Borussia Dortmund ultimately emerging triumphant thanks to a second half header from substitute Youssoufa Moukoko. […]

The Bundesliga Winners & Losers of Matchday 27

Matchday 27 of the newly restarted Bundesliga may have lacked fans (aside from the cardboard ones), but it did not lack for excitement and talking points. The race for the title continues in earnest, the […]