Incoming Hoffenheim trainer Sebastian Hoeneß will take time to get to know his new squad, but one decision he faces ahead of the new season is what to do with Danish international Robert Skov. The 24-year-old arrived last summer from FC Copenhagen having broken scoring records in the Superliga as a right winger but spent much of last season as a converted left back in Alfred Schreuder’s side. So, just where does Skov’s TSG future lie?

With 30 goals in 34 games for FC Copenhagen in 2018-19, Skov inspired FCK to the Danish league title and was snapped up by Hoffenheim on a €10 million deal. In the Danish capital he had been dubbed the ‘Danish Gareth Bale’ with his marauding style, dribbling skills, and audacious shooting all comparable to the Real Madrid and Wales star. As an inverted winger, he loved to cut inside onto his left-foot and shoot from anywhere. His free-kick ability was the stuff of legend with eight of his thirty goals coming via set-pieces.

At the PreZero Arena under TSG’s new Dutch coach Alfred Schreuder, Skov did start on the right, but against VfL Wolfsburg on matchday 5 was picked in an unfamiliar left back role. Whether in Schreuder’s 4-2-3-1 formation or the 3-5-2 as a wing back, Skov was more often than not deployed in at the back rather than his more accustomed attacking role.

“The difference was massive. Not once in my career had I played that position, not even as a youth player. But if the coach asks me to play somewhere then that’s exactly what I’ll do” Skov explained in a recent interview with the club’s website.

“Playing at left back was an interesting experience. I actually used to mainly play on the right wing, so I was often able to predict what my opposite number was going to do. Now it works the other way round – the experience of playing in defence means that, when I play in an attacking role now, I have an idea of what the defenders I face are thinking.”

In his favour, the Dane is a big man standing at 6”1, so has the physical stature to handle himself at the back. His defensive positional sense at times was lacking, but for a novice in this position that is perfectly understandable. He led the side for assists with seven, led for shot creating actions (88) and crosses (149). He was Hoffenheim go-to-guy for set-pieces with 32 completed dead ball passes leading to a shot. He also had more touches in the attacking third than any other Hoffenheim player (624) showing that his role was more attacking than defending. His progressive distance carrying the ball was second only to Florian Grillitsch (4374 yards).

Impressive as Skov has been in his debut season in his new position, the player himself would prefer a return to his former role. In his interview he said: “It goes without saying that I prefer playing up front. I want to add more of a goal-scoring threat to my game.” In a different interview with Sportbild he added, “I’m an offensive player in my heart and gut. The club and the coach know that. But I want to do what’s best for the team. It’s not like Alfred told me that I’ll never play in a more offensive position again.”

The Dane only scored four goals last season, which was a big decrease on his stand-out season at Copenhagen. His free kick against Paderborn in November was voted the Bundesliga goal of the month, but much of his attacking potential was removed playing as a left/ wing back.

New Hoffenheim trainer Sebastian Hoeneß arrives after winning the 3. Liga with Bayern II, where he favoured a 4-2-3-1 formation. Interestingly in that side he played Derrick Köhn as an overlapping left back and the 21-year-old provided 7 assists and scored twice. 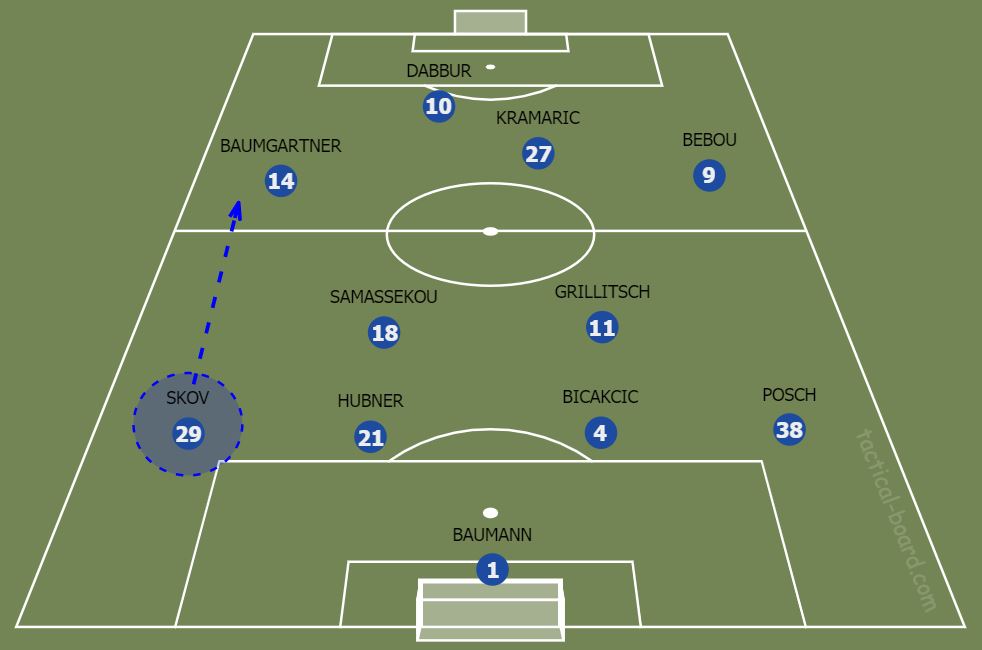 With Ihlas Bebou able to occupy the right-hand role in the attacking three, it could well be that Skov once again has to take a left/ wing back role in the Hoffenheim side next season, although his ability to play wide right makes him a useful weapon for Hoeneß to possess. Having seen first-hand what Bayern Munich achieved with Alphonso Davies as a converted left back, the new coach should be more than happy to continue with Skov in a withdrawn role.

Julian Nagelsmann’s return to Hoffenheim was a happy one with his RB Leipzig side coming away with a 2-0 win to cement their place in the Bundesliga top three. For once however, it wasn’t Timo […]

The winners Thomas Müller With Robert Lewandowski not in the squad, it was down to Thomas Müller to carry on the work of the deadly duo against Köln. The Bayern forward opened the scoring from […]

A highly entertaining match at the PreZero Arena ended with Werder Bremen emerging winners and moving up temporarily into the top four. At 1-1 both sides went for the win, but a late penalty scored […]