The Bundesliga is famed for its impressive, modern stadia- in part a legacy of the 2006 World Cup held in Germany. However, some of the biggest and best sides in the league have a longer tradition and some of their past glories were played out in quite different arenas. In this series we take a look at some of the iconic stadiums of yesteryear and relive history. Next up Hertha Berlin’s Stadion am Gesundbrunnen……

The Olympiastadion in Berlin with its famous ‘Marathon Gate’ at the North end is one of the most iconic stadia in German with more than a touch of history enshrined in it. Tenants Hertha Berlin, as their nickname the ‘Old Lady’ suggests, have a longer history with their spiritual home actually found in the Wedding district of the capital.

Formed in 1892 by four young friends, Hertha played their football in Gesundbrunnen at the Schebera-Sportlatz until the fusion of BFC Hertha 1892 and the Berliner Sport-Club in 1923 demanded a new venue. Literally across Behmstraße was some open land next to the Gesundbrunnen railway station and a new stadium was built opening in February 1924.

Simply known locally as ‘Plumpe’, the stadium nickname is traced back to an old water pump that was found on Behmstraße supposedly linked to the spa in nearby Luisenbad. Colloquial Berliner dialect somehow changed ‘Wasserpumpe’ to ‘Plumpe’.  The stadium when completed had a capacity of some 35,239.

The opening fixture saw Hertha beat VfB Pankow 1-0. Having finished as runners-up in the German Championship four times in a row between 1926 and 1929, Hertha finally got their hands on the coveted Viktoria Trophy in both 1930 and 1931 (the club’s only league successes).

When the 1936 Olympic Games were held in Berlin and Adolf Hitler was wooing the world with the newly opened Olympiastadion, two group matches for the football tournament were held at the Stadion am Gesundbrunnen as well as the quarter-final which saw Peru beat Austria 4-2 in controversial circumstances (Austrian players being assaulted by Peruvian fans and demanding a replay).

As with most of Berlin, the stadium was so seriously damaged during the Second World War (there were around 200 bomb craters in the pitch and mines had to be cleared), that Hertha were unable to return until 1950.  When Hertha were invited to become one of the founding Bundesliga clubs in 1963, it was necessary to move to the Olympiastadion as the ‘Plumpe’ simply didn’t meet the new requirements. Relegation to the Regionalliga between 1965 and 1968 saw Hertha return to their old stadium, but from 1968, it was home only to the youth and amateur teams.

When Hertha were embroiled in the 1971 match-fixing scandal they were faced with financial ruin and the tough decision was taken to sell the land on which the Stadion am Gesundbrunnen sat. The spiritual home of the Old Lady was sold off to property developers and in 1974 the stadium was torn down. A final farewell match against FC Nürnberg had been planned, but the game had to be called off due to extremely heavy rainfall. 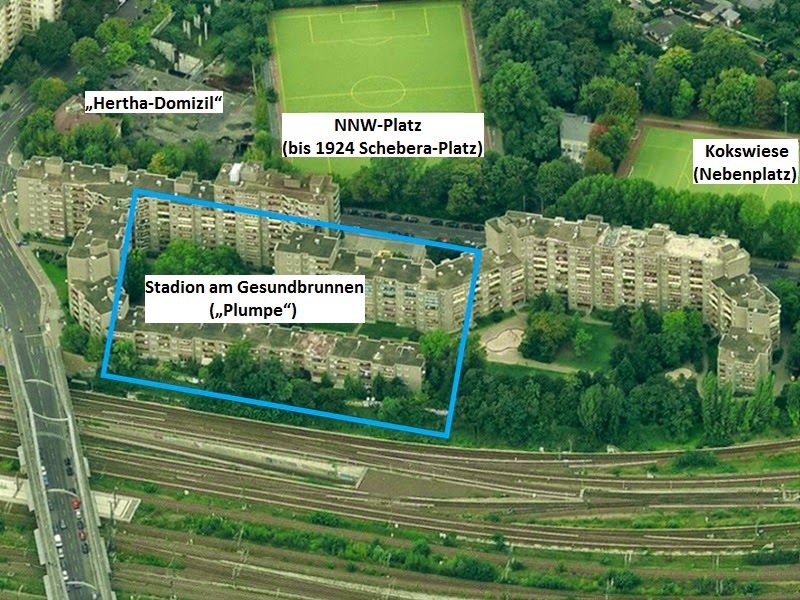 Nowadays, where once Hertha Berlin won the German Championship, there stand 440 apartments. The local pub (the Bierbrunnen an der Plumpe) is one of the only links to the site’s glorious past as well as four sculptures of footballers in the green space of the residential estate produced by Michael Schoenholtz.

Riding the Berlin S1 Straßenbahn line today, you would hardly know that the flats and trees you see out of the window as you travel along hide a once iconic stadium and where Hertha Berlin used to play.

Hertha Berlin are going to have to put the off the field dramas of the past week behind them as they look for their first home win of the season against Freiburg on Sunday. The […]

Can Krzysztof Piatek Lead the Line At Hertha Berlin?

Hertha Berlin are gearing up for the new season with their squad slowly taking shape following a few summer signings, and hopes are high amongst the Olympiastadion faithful that they can go some way to […]

In Shakespeare’s Richard III, the eponymous villain of the play utters the famous line: “A horse, a horse, my kingdom for a horse” as he struggles on the battlefield. The idea of a king wanting […]