Making it into the Bayern Munich youth teams is one thing, moving through the age groups and progressing to the first team however is an achievement that very few actually achieve. Much talent is lost from the many youngsters, who start out at Bayern. There are however a few success stories, who make it elsewhere and then become targets for the German giants to lure back to Bavaria. The case of Marin Pongračić is one such example.

The Landshut-born central defender was a January transfer window arrival at VfL Wolfsburg and he immediately set about impressing with a number of solid displays, which really helped shore up a defence that coach Oliver Glasner had identified needed attention. Arriving from Red Bull Salzburg for €10 million, the Croatian U-21 international quickly established a central defensive partnership with John Brooks and instantly became a pillar of the Wolfsburg back four.

From rejection to the Bundesliga

It all began for Pongračić at Bayern though when he joined the club’s youth set-up. However, once he had reached the U-16 side, he was deemed surplus to requirements and moved to Ingolstatdt. Having moved through the U-17 and U-19 sides with the Schanzer, he began to train with Ralph Hasenhüttl’s first team and a route to the Bundesliga looked open to him. He was though once again let go and instead moved back to Munich with 1860.

Having played for the Löwen’s second side, trainer Daniel Bierofka handed him a chance in the first team when he was short of central defenders and muck like at Wolfsburg this season, hr grabbed the opportunity with both hands and shone. His six appearances were not enough to save 1860 from relegation and then when they were denied a licence for the 3. Liga, Pongračić made the switch to Red Bull Salzburg.

Two Austrian titles and a cup triumph were achieved, but the transition to an absolute first choice seemed to elude the youngster and when Wolfsburg approached, a move to the Bundesliga was on. Oliver Glasner was fully aware of the defender’s ability from his time at LASK, but still had to beat off reported interest from both Bayern and RB Leipzig to land his man.

Despite a red card in only his second appearance in the Bundesliga against Fortuna Düsseldorf for an unintentional elbow, he made up for it with two goals in Wolfsburg’s 4-1 win over Bayer Leverkusen on matchday 28.

Pongračić is a classic central defender but can also be used in defensive midfield. Standing at 1.89m, he is very strong in the air both defensively and offensively (as his Leverkusen goals showed). He also possesses solid technical ability with a good passing game and good ball retention.

Physically strong, the 22-year-old is very robust and can therefore hold his own. He is also extremely fast for a central defender, so coping against pace is not an issue. 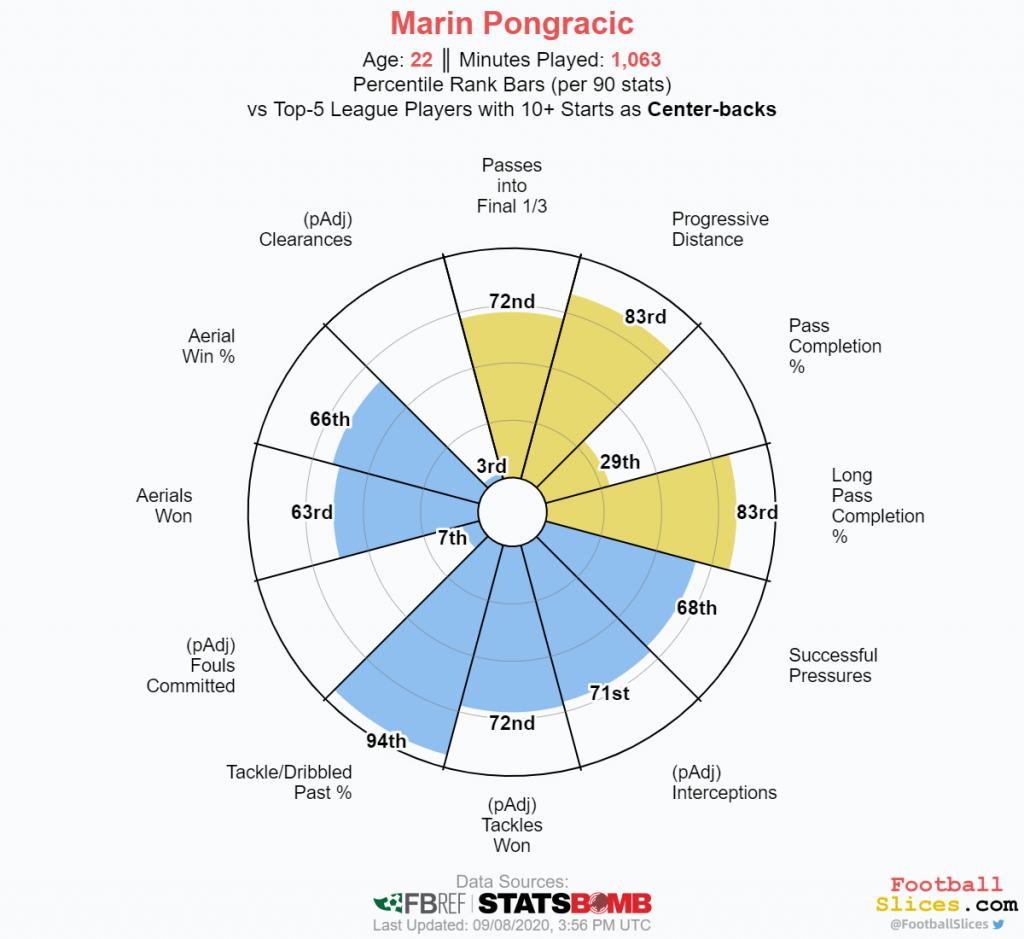 As the graphic shows, he is very difficult to dribble past and amongst central defenders playing in the top five leagues in Europe ranks in the 94th percentile. He is in the 83rd percentile for both long pass completion and progressive distance, while his rankings for tackles won, passes into the final third and interceptions are all high, whereas the number of fouls he commits is very low.

The Bavarian-born centre back is very much one to watch in the coming seasons and with development and time, it wouldn’t be a stretch of the imagination to see him playing at a higher level.

Whether that higher level could mean coming full circle and returning to Bayern Munich remains to be seen.

In an entertaining semi-final between the German and the Spanish champions, Barcelona controlled the game but left their finishing boots at home, while Wolfsburg rode their luck to advance to their fifth Champions League final. […]

Women’s soccer has had an incredible year globally. The 2019 FIFA Women’s World Cup was a resounding success both on and off the field, with the United States national team defending their title in Lyon […]