Much of the talk prior to RB Leipzig’s Champions League quarter-final clash with Atletico Madrid was the match-up of centre back Dayot Upamecano against striker Diego Costa- two heavyweights going head-to-head. There was however a clear winner on the night as the Leipzig defender put in a highly classy display to negate the threat of the Brazilian and help steer the Roten Bullen into a first-ever European semi-final.

On paper Upamecano versus Costa was always going to be a fascinating watch. The wily Brazilian with his armoury of physique, attitude, and a few psychological tricks faced a man-mountain of a defender widely touted as one of the biggest potential stars of the future. Costa, standing at 1.86m and weighing in at 86 kg faced Upamecano also at 1.86m, but 90kg.

Julian Nagelsmann set-up with a back three of Lukas Klostermann, Upamecano and Marcel Halstenberg, with Angelino and Konrad Laimer as wing backs in defence, but adding to the midfield when in possession. 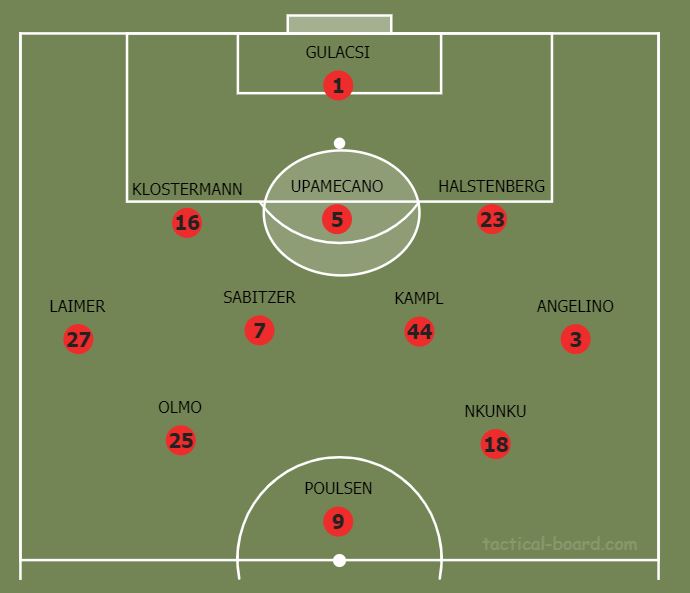 From the very start, Upamecano gained the upper hand, not allowing himself to be bullied by Costa and winning pretty much every challenge. Costa became frustrated early on resorting to trying to win free-kicks theatrically rather than trying to win the ball. Costa’s hold-up play is normally one of his areas of strength, but such was the reading of the ball by Upamecano, the ball hardly stuck for the Madrid forward, and as the clip below shows, the Leipzig defender wasn’t just content at stopping Costa, he wanted to spring forward and initiate the transition to attack.

Another stand-out aspect of Upamecano’s play against Atletico was his unwillingness to just play the safe and easy pass back to his goalkeeper Peter Gulacsi. Rather than allowing the Spanish the opportunity to reset and face the ball, he often opted to move forward with the ball himself, playing a forward, rather than a backwards pass. The clip below shows one such example where under pressure, a back pass would seem a decent choice. Not so Upamecano, who takes on two players before spreading the ball wide.

It was a superb overall display from the 21-year-old defender and one which will certainly have him on the radar of many big clubs. RB Leipzig have just managed to extend his contract to 2023, but with a release clause of €42 million, so expect a situation much like that of Timo Werner. Upamecano will stay at the Red Bull Arena next season, before the likes of Manchester United, Arsenal, Real Madrid, Barcelona or Bayern pay his release clause once the financial markets have stabilised following the corona virus upheaval.

Before that though is a Champions League semi-final against Paris St. Germain and an equally fascinating potential match-up against Kilian Mbappe. Beast mode will once again need to be in full effect if Leipzig are to make it to the final.

You can see from Upamecano’s stats that he really didn’t put a foot wrong against Atletico Madrid. A clear winner of the Man of the Match award, he won 100% of his tackles and had a pass accuracy of 92%. His dribbling success also hit 100%, while his long pass completion was ten out of fifteen.

He won six out of his seven aerial duels and three out of four of his ground duels, making five clearances and three interceptions. 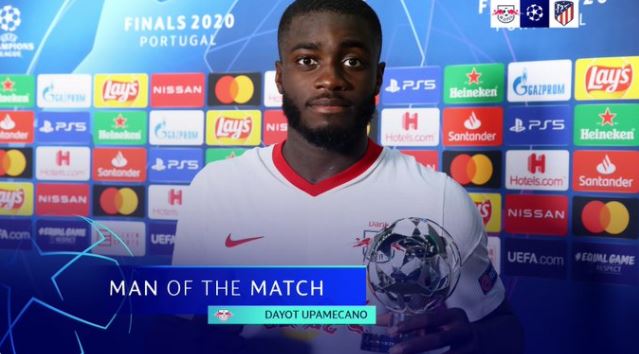 Jermaine Jenas, BT Sports: “When you look at Upamecano going up against Diego Costa today, it was like no point Costa even being there. It looks so easy to him the game. He looks like he is playing with his mates and that’s when you know you’ve got a good player.”

Dayot Upamecano: “We are all very happy. This was the match that we needed to produce, and we did so! Now, we are in the semi-finals. We are going to do everything we can to go as far as possible. Before the match, the coach told us not to be scared, that we needed to be relaxed, as if this was just any other match. He placed confidence in us. PSG? They are the biggest club in France, we are expecting a big game. We are going to try to give our all to go and get the victory.”

Squawka Football: “This beautiful tank is already brilliant and yet he can only get better. If your club needs a centre-back this summer and Dayot Upamecano isn’t the first name on your list, you need new scouts.”

Bundesliga Transfer Window Closes with a Flurry of Action

We are living in strange times and those strange times were also in play during the final hours of the Bundesliga summer transfer window. More so than is usual, we have seen a flurry of […]