Hertha Berlin are gearing up for the new season with their squad slowly taking shape following a few summer signings, and hopes are high amongst the Olympiastadion faithful that they can go some way to achieving their stated goal of taking the club to the ‘next level’ both domestically and into Europe.

This summer has seen the arrivals of goalkeeper Alexander Schwolow and right back Deyovaisio Zeefuik with money still available for further arrivals. Factor in the €77 million spent in the last transfer window in January and you have quite the investment by backer Lars Windhorst.

One of those arrivals in January was Polish striker Krzysztof Piatek, who cost €24 million from Milan. With Salomon Kalou and Vedad Ibisevic no longer at the club, the onus on getting the goals to help Hertha achieve their ambitions falls on the 24-year-old’s shoulders, and they question is, can he deliver?

During the Bundesliga Rückrunde last season Piatek made 15 appearances (9 as a starter) and scored 4 goals. It was very much a case of bedding in at the capital club and this season he will be expected to hit the ground running as the main man at the tip of Bruno Labbadia’s attacking line. In an interview with Kicker this week, the coach set the striker a challenge to prove his worth.

“He has to become more present and effective,” Labbadia explained. “Krzysztof works extremely hard, but his abilities need to come into play more. We have to think about how we can get him into the right positions, and how we need to play to make sure he gets more involved. Hertha’s managing director Michael Preetz believes the 25-year-old has made ‘a really good impression’ during pre-season, saying “He’s getting more and more integrated and is on the right path to playing a significant role for us.”

Piatek has his strengths, but also a few obvious weaknesses. It is obviously up to Hertha to play to his strengths. He is a typical number nine, a centre-forward, who can shoot with both feet and head well. He has good reactions, but his weakness is his speed (or rather lack of it). He is also not the most technically gifted player- he is more of a natural finisher. 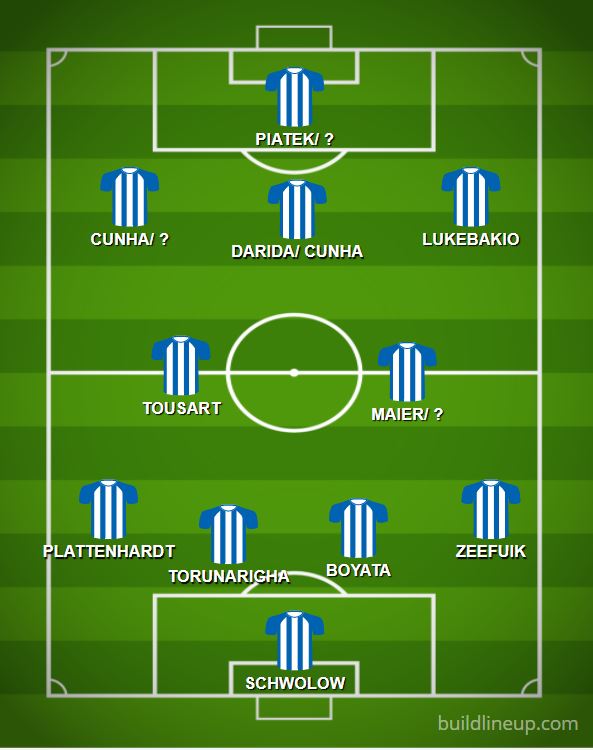 Bruno Labbadia tended to favour a 4-2-3-1 last season making Piatek the lone striker. Matheus Cunha could play behind him centrally if a new left-sided attacker/ winger were to be signed as is being intimated. There is also the possibility that a second striker could be purchased. Patrik Schick was a success last season on loan at RB Leipzig, but the move doesn’t look like it is going to be made permanent with the Sachsen side not willing to pay the fee Roma are demanding. Hertha, being in the money, could if they wished to afford the outlay.

Hertha scored 48 goals last season but had Dodi Lukebakio and Ibisevic as their joint-top scorers with 7 goals apiece. Only relegated Paderborn had a top scorer with fewer goals. In an ideal world Piatek will score double figures for the Alte Dame next season and help them into the top six.

It is time to be inspired by compatriot Robert Lewandowski and deliver just a fraction of his output.

Hertha Have to Believe the Win is Coming

Even though they wanted to end their run of four successive draws, Hertha Berlin would actually have been delighted to have continued that sequence as the clock ticked down at the Red Bull Arena on […]

Five Questions Ahead of Bundesliga Matchday 5

August is past and the autumnal days of September lie in front of us. Following on from another action-packed matchday 4 comes Bundesliga matchday 5 and there are a number of talking points to consider […]