Wow. Just wow. That would probably be the succinct summary of Bayern Munich’s stunning Champions League quarter-final annihilation of Lionel Messi’s Barcelona. Nobody could have envisaged an 8-2 victory from the Bavarians even off the back of such an impressive season from them.

Hansi Flick masterminded a tactical masterclass to overcome the Catalan giants-even if he was helped in the end by a complete collapse in mentality and commitment from the opponents. Such an amazing match can be talked about endlessly (and many Bayern fans will understandably be doing so), but here we are going to focus on three key factors of Bayern’s game that contributed hugely to the destruction of Barcelona. 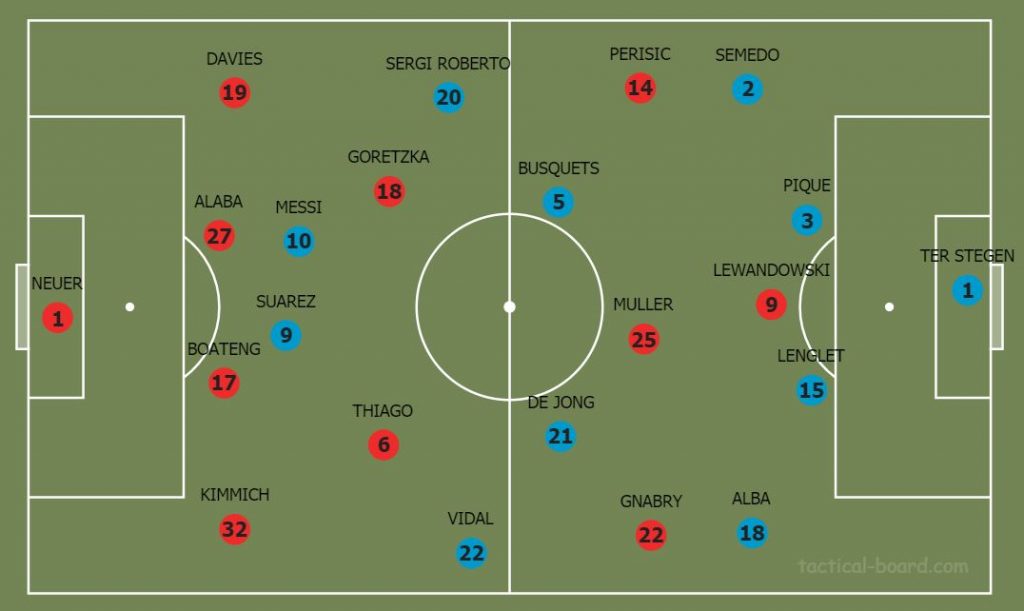 Flick sent out the same team that had overcome Chelsea in the round of 16 with Joshua Kimmich continuing to deputise for the injured Benjamin Pavard and Ivan Perisic in the three behind Robert Lewandowski in place of a not fully fit Kingsley Coman.

Quique Setien lined Barcelona up in what looked like a 4-4-2 with Arturo Vidal on the left of the midfield and Sergi Roberto on the right with Frenkie de Jong and Sergio Busquets in the centre.

Barcelona’s preferred method to build up play from the back via keeper Marc-André ter Stegen was severely disrupted by Bayern’s high press from goal kicks. Barca wanted to play the initial ball to deep-lying centre backs Gerard Pique and Clement Lenglet to get things going, but Bayern cut off the option with a high press. 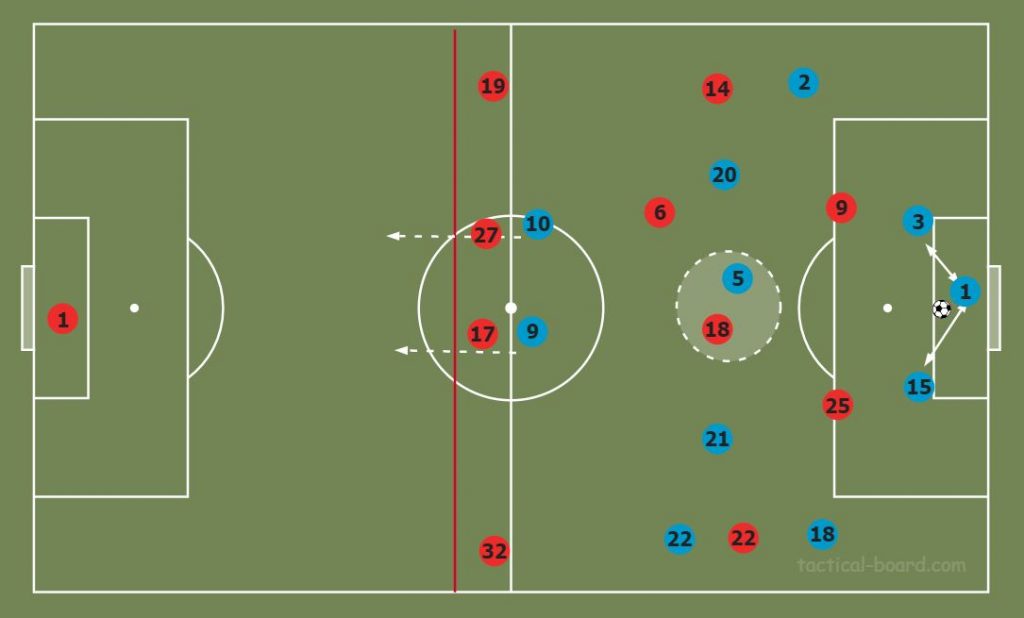 Bayern were able to play their high back line safe in the knowledge that neither Messi nor Luis Suarez posed a real aerial threat with a long ball. Lewandowski and Thomas Müller pushed high, while Leon Goretzka or Thiago cut-off the out ball to Busquets. 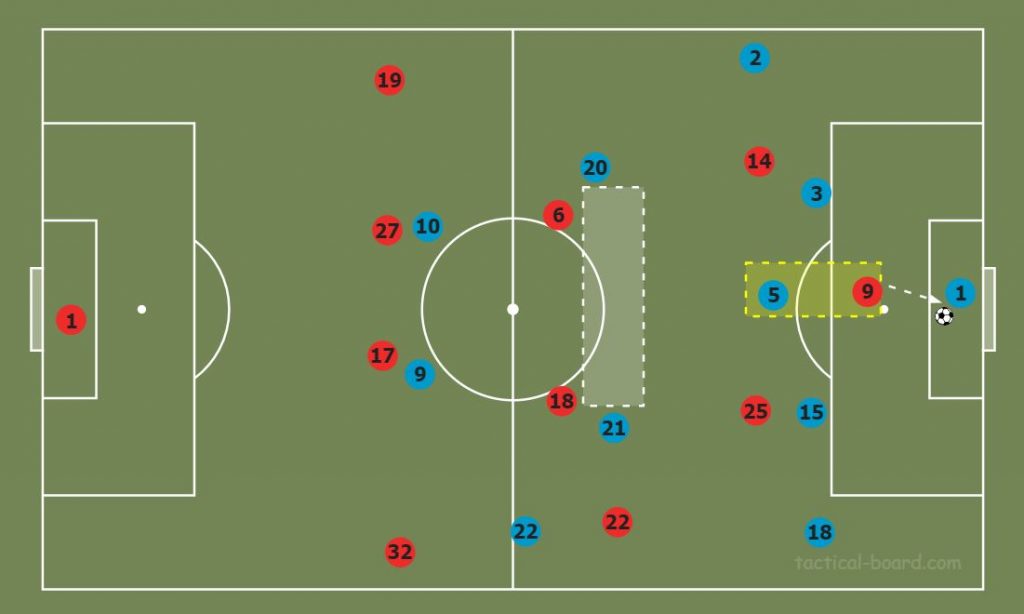 Once Barcelona had given up on plying out from deep, Lewandowski would press ter Stegen with Müller and Perisic covering the centre backs.  This forced the keeper into longer passing, which he really struggled with. He gave the ball straight back to Bayern or put the receiving player under undue pressure with a poor pass- his pass completion over the 90 minutes was just 71.1% (compared to Manuel Neuer’s 85.7%).

When Bayern had possession Barcelona’s shape was very much a 4-4-2. Thiago tended to drop deeper in between the centre backs allowing both Joshua Kimmich and Alphonso Davies to bomb forward into the wide areas doubling up on full backs Nelson Semedo and Jordi Alba. Thomas Müller would often drift wide to add another body as would Robert Lewandowski at times. The fact that Bayern’s fifth goal was set up by the marauding Davies and finished by Joshua Kimmich highlights the advanced workings of the two Bayern full backs. 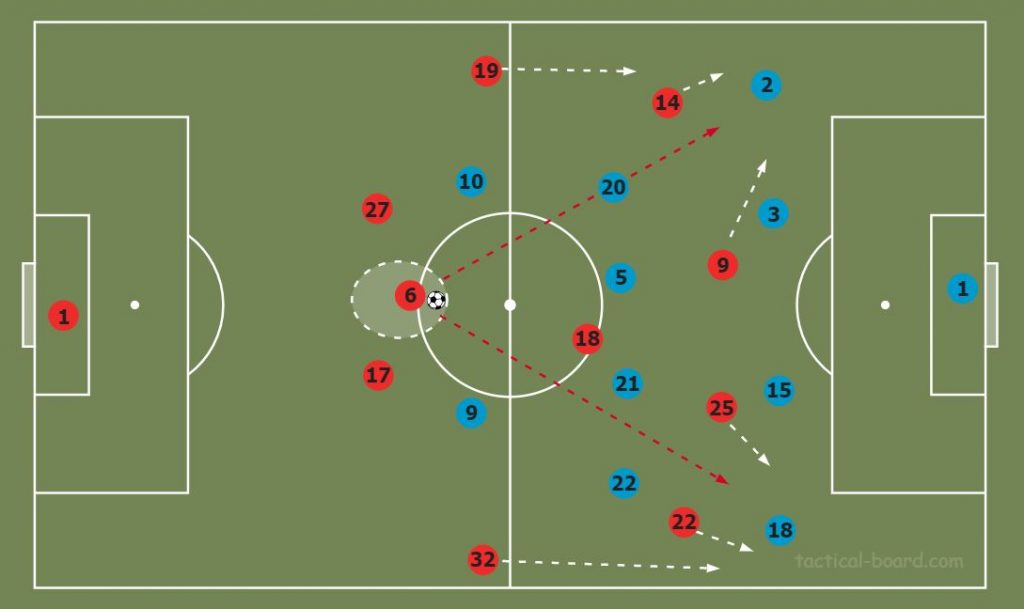 With Messi and Suarez showing little interest in the defensive side of the game, Thiago had time and Leon Goretzka could also run past de Jong to provide another passing option. This was key to Serge Gnabry’s goal to make it 3-1. Thiago had the space to pick out an advanced Goretzka, whose sublime flick over the top fed Gnabry for his finish. As the game wore on Thiago was able to get forward more, with more time and he constantly fed the attacking players.

Bayern’s high press did cause them problems at times as the space in behind did invite Barcelona on. Alaba’s own goal for Barca’s initial equaliser was a case in point as was the Suarez goal when Alba got in behind on the left. It will be interesting to see how this high press is used against a team like Manchester City should they reach the semi-final with the pace of Raheem Sterling. However, in Vidal and Sergi Roberto, Barcelona were not playing with pacey wingers, so Bayern could get away with their high line.

The power of Leon Goretzka and Thomas Müller were notable as they really did make the Barca side look tired and old at times. The pace of Davies wide on the left was key to the Kimmich goal. Having a natural winger playing left back invites him to attack and poor Semedo had no answer to his bamboozling skills.

Bayern had pace, power, and the press, while Barcelona had very little in the way of a response. Yes, Barcelona were poor and capitulated towards the end, but nothing should take away from Bayern’s superb tactical display orchestrated by Hansi Flick (who you may remember was Jogi Löw’s assistant when Germany annihilated Brazil 7-1 in the 2014 World Cup).

Coincidence? I think not.

Hansi Flick: “The plan worked perfectly, 100 percent, with the first goals. We directly exploited the mistakes that we knew could happen. They all did a brilliant job, just respect to the team. Thomas [Müller] is Man of the Match – and he deserves it. He is the impulse for our pressing, which he does just brilliantly.

“I simply have to praise the entire team for continuing after the first goals and adding the sixth, seventh, and eighth goal. I’m also very happy with the substitutes, who seamlessly joined the line-up and continued playing like the rest. Of course, you can say that this is a statement to the competition. For me it’s just a game. And the next one starts again at 0-0.”

Gerard Pique: “A horrible match, really awful feeling. Embarrassment is just the word. You can’t compete like this, you can’t win in Europe like this. It’s not even the first time, the second time or the third time. It’s really difficult, it’s horrible and I hope it serves for something.

Bayern Munich forward and club legend Thomas Müller celebrates his 33rd birthday on Tuesday, but rather than festivities at home, he’ll be doing what he does best, turning out for Bayern Munich at the Allianz […]

None of this is normal. Empty stadiums, artificial crowd noise, muted socially distant celebrations are all apart of the new reality. But with each league slowly trickling back things start to feel a little more […]

The Winners and Losers of Bundesliga Matchday 4

The winners Yussuf Poulsen Okay, so can we consider the October goal of the month award done and dusted? Anyone hoping to score a better goal than that of Marco van, sorry, Yussuf Poulsen is […]