Most of the posts I’ve read on social media in recent weeks concerning Bayern Munich midfielder Leon Goretzka have concerned the size of his biceps. Granted, he has undergone quite the physical transformation since his move from Schalke to the Allianz Arena and his ‘guns’ certainly are worthy of admiration.

However, it is not just his muscular upper torso that deserves admiration. While Robert Lewandowski grabs the limelight with his goals, Thomas Müller does likewise with his assists, Alphonso Davies’ pace makes headlines and Serge Gnabry’s wizardry on the wing gets tongues wagging, Goretzka also makes a huge contribution to the Bayern machine that has steamrollered its way to an eighth Bundesliga title and to an 8-2 demolition of Spanish giants Barcelona in the Champions League in their quest for another treble.

Arriving from Schalke in the summer of 2018 on a free transfer, it was thought the number 8 role would be his natural position, but in his debut season at Bayern he appeared in a number of positions including defensive midfield, attacking midfield and even as a left back. He made 23 starts scoring eight goals and adding four assists. The quality was there, but he was just an ‘extra’ in the all-star cast.

The past season (2019-20) had its rough points with game time not always guaranteed and back in March the player spoke about his frustration following a goal scoring appearance as a substitute against Augsburg. “It’s hard, because I am in good form right now, maybe the best form of my career to date. Of course, I’m not happy when I am not starting. I can say openly and honestly that I’m not happy.”

A groin injury to Thiago then forced Hansi Flick’s hand a little and Goretzka emerged as the natural partner for Joshua Kimmich as part of the ‘double pivot’ in the central midfield area for Bayern following the Bundesliga Corona virus lockdown. Flick seems to have a natural ability at re-homing players in new positions (David Alaba, Alphonso Davies, Joshua Kimmich) and getting the very best out of them and Goretzka looks to be yet another example.

The partnership with Kimmich in the central area has grown much like the midfielder’s biceps- a physical transformation put down to extra gym work done while in lockdown.  His positional play has massively improved- he is deeper alongside Kimmich when defending, but then knows when to advance beyond the next line when on the attack. This was very much in evidence in the 8-2 win over Barcelona when his forward advancement just wasn’t negated by Frenkie de Jong and Sergio Busquets. 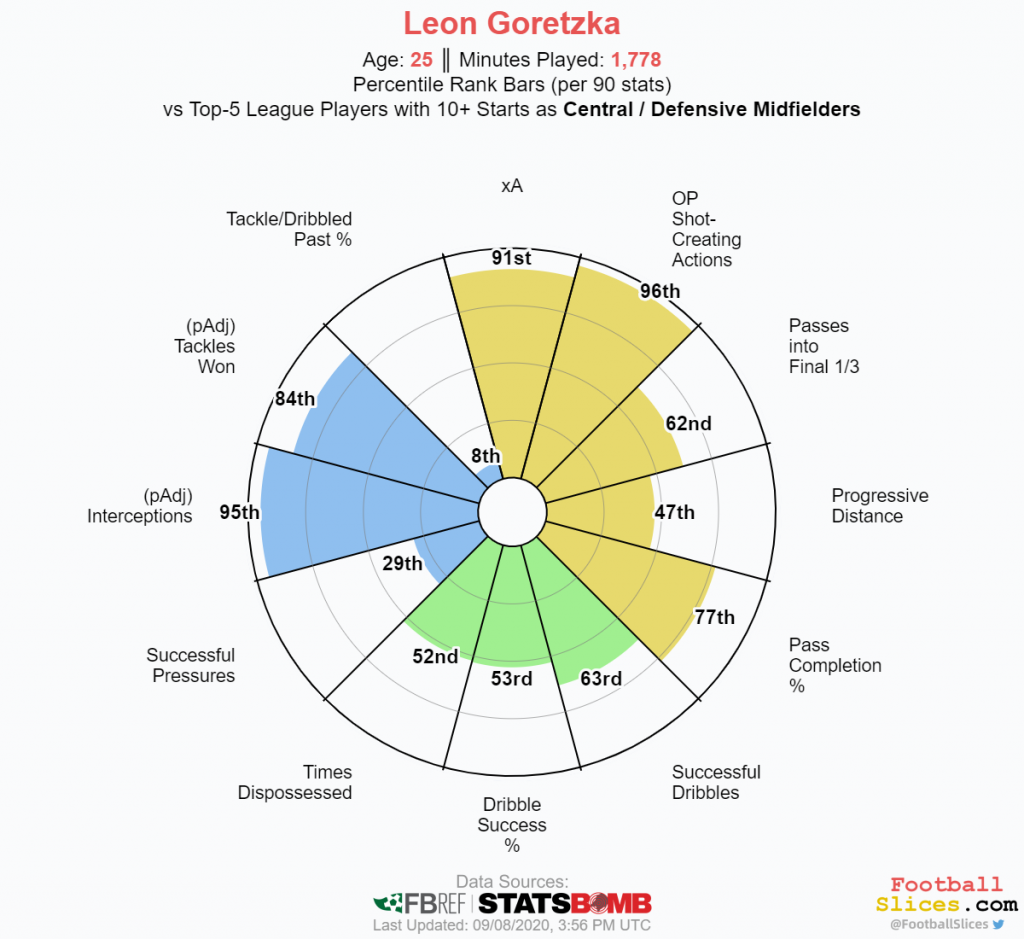 His reading of the play when Bayern are defending has also seen a big upturn and he is fully on board with the full-press Flick likes to engage. He made 23 interceptions last season with the majority of them (17) coming after the Covid-19 shutdown. Knowing that Goretzka has the defensive know-how to snuff out danger has also given fellow central midfielder Kimmich license to get forward more, knowing his partner can cope with his forays forward. Bayern’s winning goal in the Klassiker at the Signal Iduna Park came from Kimmich bombing forward, safe in the knowledge that Goretzka was covering.

He still contributed six goals and five assists as an attacking force last season showing that his old self is still there in an attacking sense. Flick is adding to the player, not taking away.

Back in 2012-13, a 17-year-old Leon Goretzka was described as “a once in a century talent” by then coach Peter Neururer while at Bochum. Seven years later at Bayern, he is showing that his former mentor may have had a point. Leon Goretzka may not grab the headlines like Lewandowski, Gnabry, or Davies, but his importance to this current Bayern Munich side shouldn’t be underestimated.

He Said What? The MD33 Trainer Soundbites

Bundestrainer Hansi Flick has broken his silence over the issue of Werder Bremen striker Niclas Füllkrug being a potential late wildcard call-up to his World Cup squad. The German coach was in Sinsheim on Friday […]

Serge Gnabry Getting Back in the Groove at Bayern

No sooner does a player attract negative attention for a dip in form, than they then perk themselves up and asks what the fuss was all about. As they say-form is temporary, class is permanent. […]