The Bundesliga is famed for its impressive, modern stadia- in part a legacy of the 2006 World Cup held in Germany. However, some of the biggest and best sides in the league have a longer tradition and some of their past glories were played out in quite different arenas. In this series we take a look at some of the iconic stadiums of yesteryear and relive history. Next up…Borussia Mönchengladbach.

It’s a word that instantly awakens the footballing senses and sets off pangs of nostalgia- the Bökelberg, Borussia Mönchengladbach’s spiritual home for some 80 years and the scene of countless glories.

Club legends such as Günter Netzer, Rainer Bonhoff, Berti Vogts and Jupp Heynckes graced its hallowed turf as the club dominated the 1970’s, but sadly the once glorious arena has passed over into the hands of developers and today is scarcely recognisable as one of German football’s iconic stadiums. The Borussia Park is now ‘home’ but the heart will forever be at the Stadion am Bökelberg.

The construction of the original stadium was supposed to be completed in 1914 only for the onset of the First World War to delay it’s inauguration until 1919. Back then it was actually called the Westdeutsche Stadion, but was nicknamed ‘dä Kul’ due to the fact it was built on a former gravel pit (insert your own Wu Tang Clan joke here).

Success eluded Gladbach though and all they really had to really shout about was a Westdeutsche title in 1920. However 1960 saw them win the DFB Pokal and brought about an improvement in the club’s finances as well as a willingness from the city authorities to invest in the sports arena. This lead to a renovation of the stadium with improvements throughout the 1960 bringing about a stadium worthy of the fantastic team that emerged at the end of the 60’s to claim the first of five Bundesliga titles in 1970. 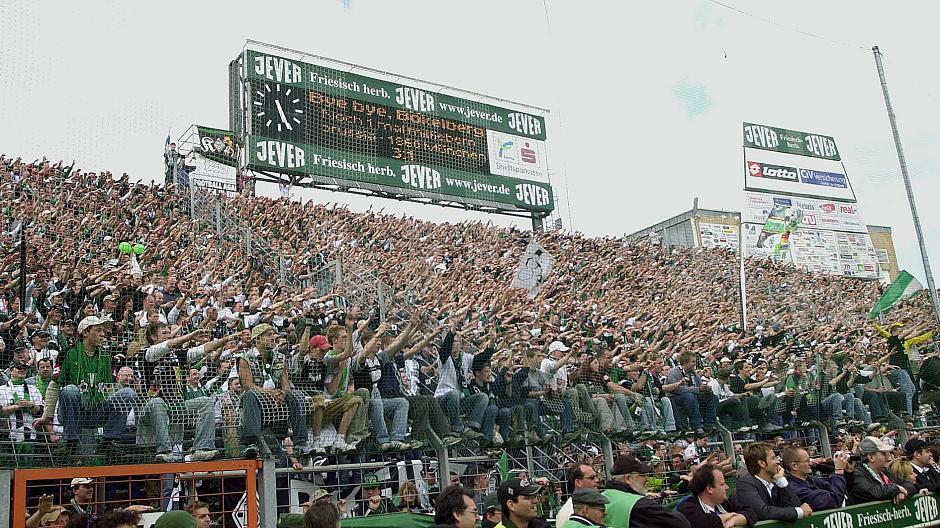 The 1960’s leading to the 1970’s was also when the stadium started to be referred to as the Stadion am Bökelberg, or simply Bökelberg for short. The name simply comes from the Bökelstraße on which the great stadium could be found.

The legendary Bökelberg witnessed many fantastic games, but perhaps the highlight was the amazing night in 1971 when Gladbach demolished Inter Milan 7-1 in the European Cup. The infamous game came to be known as the ‘Büchsenwurfspiel’ after Roberto Boninsegna was hit by a can of coke ultimately leading to the match being replayed.

The sight and sound of the Nordkurve and Osttribune chanting and singing back and forth to each other was unique at the time and few stadia in the Bundesliga could rival the atmosphere and buzz generated at the Bökelberg at the height of Mönchengladbach’s heyday.

Sadly heydays inevitably wane and by the 1990’s the stadium was in need of expansion and improvement, but local residents opposed the plans in order to protect the value of their homes and so plans were put into motion to build a new stadium and the 54,000 capacity Borussia Park ultimately replaced the ageing Bökelberg. The final match at the stadium was in May 2004 when the Föhlen beat 1860 Munich 3-1 with Arie van Lent scoring last ever goal.

With Borussia Mönchengladbach ensconced in their new stadium, the weeds and rust moved into the old arena and property developers soon dived on the site. Standing at the site of the old Bökelberg today is a haunting feeling for the old fans who can feel the ghosts of the past.

Modern apartments now stand where Netzer, Bonhoff and Heynckes once worked their magic. However, the steps leading to the famous Nordkurve remain and it is still easy to picture the scene of past glories as you find yourself in the middle of a housing development.

Gone but not forgotten- the Stadion am Bökelberg

Five Questions Ahead of Bundesliga Matchday 9

It’s been another ‘Englische Woche’ of European action, and hot on its heels comes another round of exciting Bundesliga matches. Union wobbled last week, Bayern surged, while Gladbach took the day off. Here we take […]

The Winners and Losers of Bundesliga Matchday 9

Another weekend of superb Bundesliga action has been served up in between the midweek European offerings. Der Klassiker brought a very entertaining 2-2 draw then on Sunday came an equally eventful Rheinderby. Bochum got a […]

There have been plenty of talking points over the past three matchdays of the new Bundesliga season and a full weekend of fixtures awaits with Bayern looking imperious while their so-called challengers falter already. Here […]