The flow of talented footballers from Austria to the German Bundesliga is a long-established pattern with both geography and language playing a huge role. Recent years however have seen an almost constant arrival of players from a certain energy drink-backed club from the home of Mozart.

Red Bull Salzburg have provided a whole host of exports to the Bundesliga- to such an extent that it is easy to pick an entire team capable of seriously challenging many topflight teams in terms of quality. 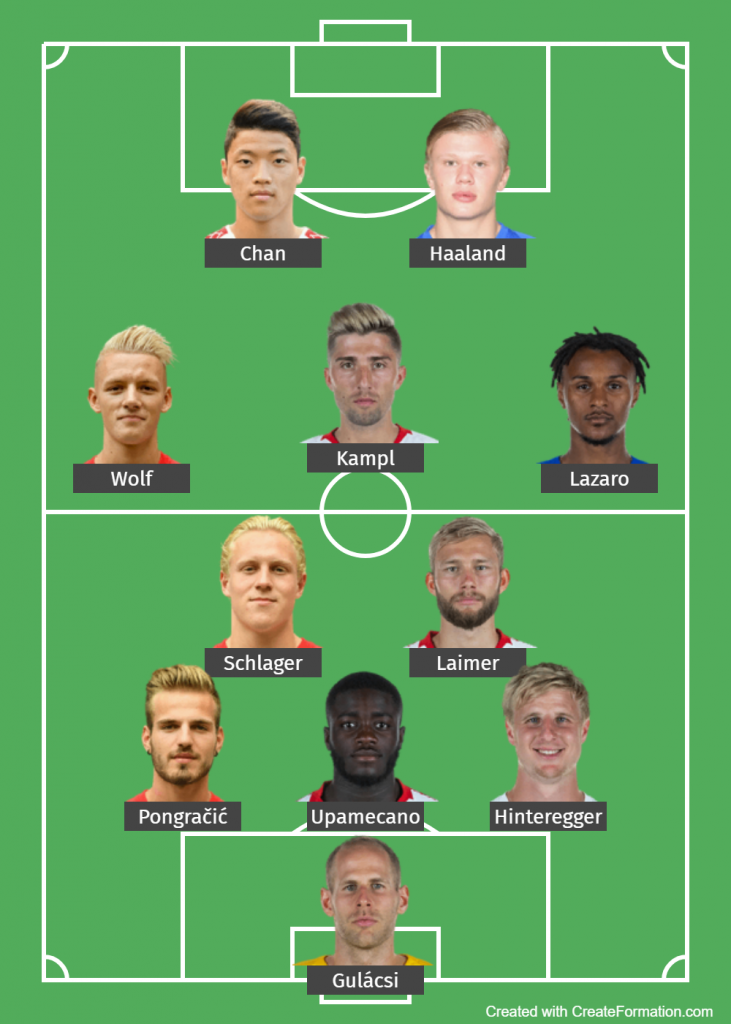 Following the retirement of Ramazan Özcan at Bayer Leverkusen, there is just one keeper left in the Bundesliga, who signed up for the Bundesliga via Salzburg. Peter Gulacsi made the switch back in 2015 when Leipzig paid €3 million for his services. The Hungarian keeper has since become of the league’s most consistent goalkeepers providing security for some talented young defenders.

Martin Hinteregger’s initial move from Salzburg to the Bundesliga was a loan to Borussia Mönchengladbach during the 2015/16 Rückrunde where he made 10 appearances for the Foals. The summer of 2016 brought a permanent €10.5 million switch to Augsburg, with Eintracht Frankfurt now employing the cult favourite in their defence.

Dayot Upamecano’s display in the recent Champions League clash between Leipzig and Atletico brought him plenty of attention, but the French centre back wasn’t exactly lacking in admirers prior to that. Following his move from Austria to RB Leipzig in January 2017, he’s been earmarked for greatness. Due to formation restrictions, I’ve gone for a back three for this team, meaning one of last season’s better performers misses out on a starting place. Right back Stefan Lainer had a very impressive season for Borussia Mönchengladbach and would perform admirably if drafted into a back four.

Lainer’s absence leaves a space for VfL Wolfsburg’s Marin Pongracic. The Bavarian-born defender was reportedly being tracked by both Bayern and Leipzig before Wolfsburg snapped him up in the January transfer window this year.

There is a plethora of midfielders sourced from Salzburg both defensive and more attacking. For this side and this formation, I’ve picked two defensive and three more creative players.

‘Sexy football’ as Ruud Gullit once described it is the aspiration, but somebody has to do the dirty work and that role has been filled at RB Leipzig by 23-year-old Austrian Konrad Laimer. The past season Laimer saw him win 332 duels putting him 12th overall in the Bundesliga, he led the entire league for tackles in the midfield third with 50, while also topping the division for tackles in the attacking third with 16- showing that he is not just content to sit in front of the defence and mop up the danger.

Alongside him will be VfL Wolfsburg’s Xaver Schlager. He enjoyed an impressive first season in the Bundesliga in the engine room after being signed by trainer Oliver Glasner, who knew him well from his spell at LASK. Both Amadou Haidara of Leipzig and Diadie Samassekou of Hoffenheim will have to be content with a place on the bench in this XI of Salzburg exports.

An attacking trio in the 3-5-2- formation would be formed by Kevin Kampl, Hannes Wolf and Valentino Lazaro. Kampl is another of those players often not as lauded as the more spectacular names, but nonetheless just as vital to the team. He was kay member of the Leipzig side that made it all the way to the Champions League semi-finals.

Hannes Wolf may not have enjoyed the best of debut seasons in the Bundesliga after injury blighted his start, but he will be hoping to get things back on track on loan at Borussia Mönchengladbach, where he has been reunited with former coach Marco Rose. Another player reuniting with Rose is former Hertha midfielder Valentino Lazaro. His move to Inter didn’t pan out as expected, but the Bundesliga will welcome him back and Gladbach have a third former Salzburg start in their ranks.

There was never much doubt that Erling Haaland was going to be a major star when he left Salzburg. The question was just where would he be banging in the goals. Borussia Dortmund were the winners in that regard and the Norwegian began in the Bundesliga where he had left off in Austria- bagging a hatful of goals.

I have gone for Korean Hwang Hee-chan to partner Haaland in the front two leaving Hoffenheim’s Munas Dabbur to provide back-up. Hwang has the unenviable task of replacing the Timo Werner goals at Leipzig.

There is even a top-class coach to take control of this team of Salzburg exports. Former Red Bull trainer Marco Rose more than fulfilled expectations at Borussia Mönchengladbach last season as he guided them into the Champions League.

What Has Gone Wrong in Frankfurt?

It’s real now.  The fans…..the players…….the coach…..the media, they are all beginning to speak the words that no club ever wants to speak: Relegation battle.  A year ago, the Eintracht supporters were seeking a way […]

For the second season running Borussia Dortmund had to settle for second spot in the Bundesliga as rivals Bayern Munich once again proved too much to overcome in the race for the title. Even with […]

When Bayern Munich clinched their 8th successive title by defeating Werder Bremen on Tuesday all the talk was about how the Bundesliga is once again in a boring cycle. The Bavarians’ dominance in recent years […]