Werder Bremen were supposed to have put the nightmare of last season behind them and moved on from their dalliance with relegation. The fight to avoid the dreaded drop last season was won (just), but after only the first match of the new campaign, there looks to be a huge amount still to do to get the Werder ship sailing in the right direction.

Their matchday 1 home loss to Hertha Berlin was not what the 8500 fans, who had yearned for a return to the stadium wanted to see and the mood is already one of déjà-vu.

A new chapter was supposed to have started this season and after the Grün-Weißen won all seven of their pre-season matches, Florian Kohfeldt was saying all the right things about the team having a new hunger and mentality. However, what transpired on Saturday looked to be a return to bad old days of last season and the Werder coach has a lot more issues to iron out if this season isn’t going to be a depressing re-run of last season.

Werder’s old defensive frailties were once more on display with poor marking for the first Peter Pekarik and then they gave the ball away too easily for the second that followed minutes later. Overall, there were too many needless losses of possession and even with the ball, there was not enough pressure exerted on the visitors.

“At the end of the day, we deserved to lose for a few reasons” Kohfeldt explained after the match. “The principle reason was the first 35 minutes of the game. We had space and opportunities and we played some good football, so we had the chance to take control of the match. But we couldn’t switch on and pressure them; I felt like we didn’t make our presence in the game felt.

“For the first goal, our pressing was lacking, and the second goal was poor marking. That was really annoying because it was something we’d covered in training. Before their second goal, we were poor in possession which is something that shouldn’t be happening to us.

“When we made it 3-1, we had a chance to get back into the game, but the fourth goal really settled the match. It wasn’t good enough for the Bundesliga in a lot of ways, but especially in terms the way we approached the game tactically.”

There will be questions asked of Kohfeldt’s tactics. He started with both Davie Selke and Josh Sargent, but the young American was played wide on the left of a three behind Selke with Tahith Chong on the right. This didn’t make the most of the youngster’s talent and commentator Kevin Hatchard summed it up brilliantly by saying it was ‘like having a nice guitar but using it is as a drum’.

If the trainer’s words weren’t stark enough sporting director Frank Baumann was equally as blunt in his disappointing summary of events. “Both the result and the performance are disappointing, especially from the 40th minute onwards. Up to that point, both teams were very cautious, and we were on top for periods. Defensively we were pretty good until then and we were winning the ball back well, but we didn’t do enough with it. But we wanted to take control of the game.

“After Hertha’s goal, we didn’t push forwards and instead dropped deeper. We didn’t offer enough, and we were too passive. The belief in our game that we spent so long looking for last year and only started to find again after the restart just wasn’t there. That was noticeable when we were in possession but even more when we were defending. We need to rediscover this belief.” 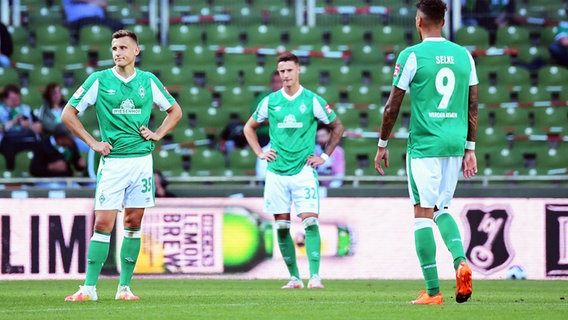 Those horrible phrases stand out: poor marking, lacking pressing, poor in possession, passive, missing belief. Rather than looking forward, Werder fans find themselves looking back and seeing the ugly head of last season in their rear-view mirror. There is no shame in losing to Hertha Berlin, but it was the manner of the defeat that will hurt. The ghosts of last year have not been fully exorcised, and that is something that needs to be done sooner rather than later.

On the horizon are Schalke on matchday 2 so at least Werder are facing a side with even more demons than them. Should the unthinkable happen and the Königsblauen actually end their winless streak, those who put their continued faith in Florian Kohfeldt might start to reconsider.

He Said What? The Matchday 6 Trainer Soundbites

Schalke 1-1 VfB Stuttgart Manuel Baum: “I think it was fair that we went ahead in the first half. We were good with the ball and had enough confidence to play it out from the […]

Where Next for Max Kruse?

A year after leaving the Bundesliga, striker max Kruse is on the hunt for a new club after cancelling his contract with Turkish side Fenerbahce. A return to Germany could be on the cards, so […]