Sportschau is the German equivalent of BBC’s Match of the Day – a bastion of German sports programming broadcast on ZDF showing all the action from that day’s Bundesliga matches.

And yet…it is so very different. When in Munich I used to hasten back to my student accommodation from the Olympiastadion to catch the start of it on a Saturday evening. After all, there is nothing quite like watching the highlights of a game you were actually at. Yet Sportschau, despite being MOTD’s long-lost cousin, actually (rather like a long-lost cousin in fact) has nothing in common with its British equivalent.

I first became aware of the greatest sporting programme on television when Sky subscribers in the UK also had access to German TV in the mid 90s – sadly no longer available since the digital revolution. It is still available to many on the continent (basically anyone who has ARD), but in case you want to know what you’ve been missing, here are seven reasons why I love Sportschau – my very own love letter to a dear institution:

The first baffling thing to British viewers is the order of matches. Fancy tuning in to to see the best game, before switching off? Good luck with that. The best game is at the end, you’ll have to sit through the 0-0 draw between Hoffenheim and Augsburg, followed by several well-fought mid-table games, before the tension builds to either the most-trailed game or the most dramatic. They like to keep you waiting, those Germans, with each ad break previewing what’s up next – either “der Klassiker” between Bayern or BVB or a crazy game such as Schalke 7 Leverkusen 4. By the time the last two games come on, you are positively vibrating with anticipation. You can of course watch without knowing the scores of any games, but if they’re leaving Mainz v Union Berlin to the end, you know something pretty crazy has happened.

There is no tactical analysis – this is pure goals and action. The presenter is there to bridge between matches, no more no less. Any controversy will be dealt with by the in-game commentator, who makes a definitive call on whether a penalty is a penalty – and there are no grey areas. “Für mich, kein Elfmeter“. And that is that. We move on.

How to describe the commentary? This is not live commentary as such, but nor is it bland reporting – it’s a bizarre mixture of the two. You know the commentator is watching it from his studio, he may comment on the weather – “it was a hot afternoon in Leipzig” – but once the action starts he is amongst it. Prefaced with “in the 28th minute” to give some context, he will then commentate as if he is seeing the action for the first time. Far from being distracting, this is compelling for the viewer. The commentator knows what will happen, but is toying with you, telling you a story of which he knows the ending. This style is quite unique. The viewer is at the commentator’s mercy. 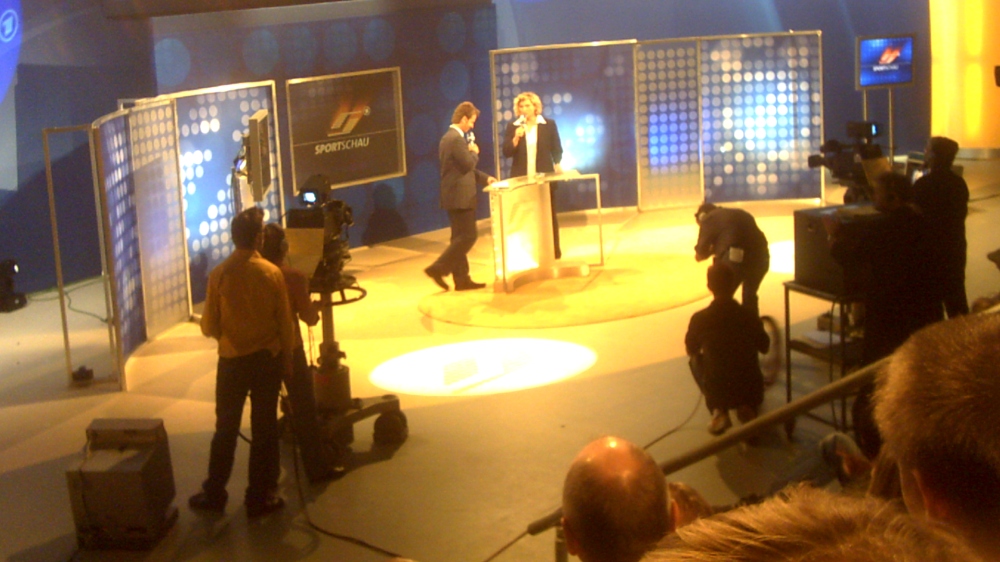 For certain games, we will get a change of pace, and as a preview an ex “Profi” will be interviewed about a memorable game between these two teams, many of which seem to have been played in outrageous snowstorms. Some of these archives go back to the 1970s, allowing the viewer to marvel not just at the conditions the games used to be played in, but also the grounds, cavernous in size with giant scoreboards at one end. Placing the fixture into a historical context is more than just “they haven’t beaten X since 1997” – it roots it in players’ and supporters’ experience, and any pre-Wende games can sometimes come with additional cultural and political baggage. Great if you like that sort thing.

A 6pm start time for the programme as a whole, but the Bundesliga games don’t actually start until past 6.30pm, so unless you’re at an away game or travel long distances, many home fans could potentially get home, watch the highlights from the game they were just at, and then begin their Saturday entertainment. Much more civilized, nicht wahr?

They include goals from further down the pyramid

In recent seasons Sportschau has started showing action from the 3. Liga and the 2. Liga, allowing us the opportunity to take in such delights as Hansa Rostock v Hallescher FC or Preussen Münster v Zwickau. New allegiances would be forged, the coaches would become familiar, decked out in their more casual attire such as baseball hats, jeans and trainers. A move away from the besuited sages of the top league. And time to get out the atlas, because where the hell is Sonnenhof Grossasbach?

As with most TV shows in Germany, presenters stand up when they present – it’s good for the back, you see. This of course means they can roam about the studio, pointing this way and that at graphics as they appear on the screen, casually holding their cue cards in their hands. So welcoming, so warm. Like you’re entering someone’s house.

To conclude: Sportschau deserves so much more attention than it has outside the German speaking world. Any football fan in their right mind would be mad to miss out on such a spectacle, and you don’t even have to speak German to get it. A timeless tradition, a pillar of the German football experience.

About Rob Francis 2 Articles
Rob's first taste of German football was on a school exchange trip in 1998 when he was taken to Eintracht Frankfurt v Mainz at the old Waldstadion. This was followed up during the 2000/01 season when he was supposed to be sitting in lectures at Munich University, but which he actually spent interrailing round Bavaria and Central Europe watching football. Now based in Brussels, he travels all over the world watching football, including following the Belgian football team home and away, and plans one day, someday, maybe, to write the definitive guide to global football fan culture. Follow him on Twitter @robccfc.
Twitter

One of my favourite German footballing terms is ‘Leistungsträger’. It is difficult to translate easily into English, but it is someone, who through their own performance is decisive in the whole performance of the team […]

When it was announced that the Bundesliga would be returning after a long 9 weeks, I was incredibly excited about the prospect of live soccer, albeit behind closed doors, even in a league I did […]

Kai Havertz: Should I Stay or Should I Go?

It doesn’t take a genius to see that one-day Kai Havertz will leave Bayer Leverkusen and turn out for one of the ‘big clubs’- be that Bayern Munich, Barcelona, Real Madrid, Liverpool (the list goes […]