The Bayern striker seems to have a permanent place in the winners section and it tempting to already pencil his name in for next week’s column now. This weekend saw the Pole get into double figured for the season with just five games played-

His first with his left came within the opening ten minutes against Eintracht Frankfurt in Bayern’s 5-0 win after nice combination between Thomas Müller and Kingsley Coman. He headed home his second via a corner, while his perfect hattrick was completed on the hour mark with a right-foot finish.

No player in in 58 years of Bundesliga football has managed to reach ten goals at such an early stage of the season. “The statistics aren’t that important to me, I’m focused on the team and the game,” Lewandowski said after the match. “I hope we can keep this form up for a long time to come. We always want to show our best football”

Teammate Jerome Boateng however was prepared to single out the striker saying: “He’s incredibly dangerous because he has everything. Left foot, right foot, good dribbling, aerial prowess. He moves very well, is very agile. That makes him currently the best striker in the world.”

Leipzig’s positive start to the season continued on Saturday as they notched up their fourth win to maintain their place at the top of the table (a point ahead of Bayern Munich).

Following their opening Champions League win last week against Basaksehir, there were Bundesliga starting debuts for Alexander Sörloth and Justin Kluivert, while Benjamin Henrichs was in from the start for the second time. After going behind in the 8th minute after Hertha Berlin broke out of their press, they responded with an equaliser three minutes from an unlikely source- Dayot Upamecano.

After the visitors were reduced to ten men, the three points were secured when Marcel Sabitzer, making his first appearance of the season as a substitute) dispatched the winner from the penalty spot in the 77th minute.

“It was a well-deserved victory for us” coach Julian Nagelsmann said afterwards. “The start wasn’t easy but after the equaliser, it was a good first half from us with a lot of good attacks. Their red card wasn’t a clear advantage for us; they started to sit deeper. However, we still played well and deservedly got the victory. We had a good amount of scoring chances- the game wasn’t as close as the scoreline implies.”

Borussia Dortmund enjoyed a comfortable 3-0 win in the Revierderby against rivals Schalke and the victory was also of personal importance to attacker Julian Brandt, who notched up his 100th Bundesliga win. Only seven players have reached the milestone at a younger age and all of them had played for Bayern.

Brandt was selected in his favoured advanced central role behind Erling Haaland and in the middle of Jadon Sancho and Giovanni Reyna and he certainly enjoyed being back where he feels most comfortable. He was seen all over the field directing the build-up play and linking up with his teammates. His movement and one touch play were important factors in BVB’s ability to play against Schalke’s deep line. He finished with a 94% pass completion and ran Raphael Guerreiro close for the man of the match award.

Having been a Borussia Mönchengladbach member since birth and playing in the youth sides since the age of seven, the full Bundesliga debut of 18-year-old midfielder Rocco Reitz was the stuff of dreams on Saturday as the Foals beat Mainz 3-2.

Having impressed Marco Rose in pre-season the player has played his way into the first team squad and looks set to be used in the trainer’s rotation with the club competing in the Champions League this season. At 18 years and 148 days, Reitz became the 12th youngest player to turn out for Gladbach and he enjoyed an impressive debut.

“It was a very good Bundesliga debut from him” Rose said at the final whistle. “He was very present; he demanded the ball and also played a number of good balls forward. Reitz himself could hardly hide his joy. “I have never slept so good as I did last night. I can’t shift the smile from my face- it was an incredible feeling.”

VfB Stuttgart’s Orel Mangala scored the fastest goal of the Bundesliga so far when opening the scoring in lightning fashion at the Mercedes Benz Arena on Friday against 1.FC Köln. A slick move straight from the kick-off was finished with a fine strike after just 24 seconds by the 22-year-old.

Aside from the early goal the Belgian played the most passes (71) of any player on the field – with an impressive 87.3% of them finding a teammate. In addition to his goal, the midfielder was also involved in a total of three other shots on goal. In addition, he clocked up 11.16 km and won 60% of his duels.

The early signs were not good for Dutch fullback Deyovaisio Zeefuik after being sent on at half-time at the Red Bull Arena for Hertha Berlin against RB Leipzig. Replacing Peter Pekarik, he took just one minute and one poor touch to earn a yellow card from referee Tobias Stieler after a late tackle on Christopher Nkunku.

Time to calm down and compose himself? No, time for a second rash tackle on Nkunku on the touchline and an early exit after just four minutes of being on the pitch. Only Thomas Schneider (Stuttgart 1998-99) and Sejad Salihovic (Hoffenheim 2012-13) previously saw a double yellow card with just four minutes of action as a substitute.

Despite taking a 2-1 first half lead against visitors Borussia Mönchengladbach at the Opel Arena on Saturday, Mainz once more emerged without anything to show for the efforts and succumbed to a fifth consecutive loss.

Goals from Jonas Hofmann (76) and Matthias Ginter (83) saw the Foals take all three points and condemn the Nullfünfer to being the only side still without a point to their name this season.

“We’re fuming to have lost the game like that” coach Jan-Moritz Lichte said angrily at the final whistle. “We deserved more and didn’t take our chances to go 3-1 up. We’re furious about the penalty; I think the decision could easily go the other way.

“After that, I think we started to panic that we’d lose the game. We weren’t alert enough from the set piece. The corner was delivered and headed well, but we were a yard off the pace, so it’s incredibly disappointing.”

In just his second start of the season, Bayern’s Alphonso Davies saw his afternoon cut short at the Allianz Arena after being forced off injured after just three minutes of action.

The 19-year-old Canadian, who was one of the stars of last season’s treble rolled his ankle in the opening minutes of the clash with Frankfurt and had to be helped off replaced by Lucas Hernandez.

“He sustained a ligament injury. One ligament is fully torn, another is partially torn. We reckon he’ll be sidelined for six to eight weeks,” coach Hansi Flick explained ruefully at the post-match press conference: “It hurts when a player of this quality is ruled out.” 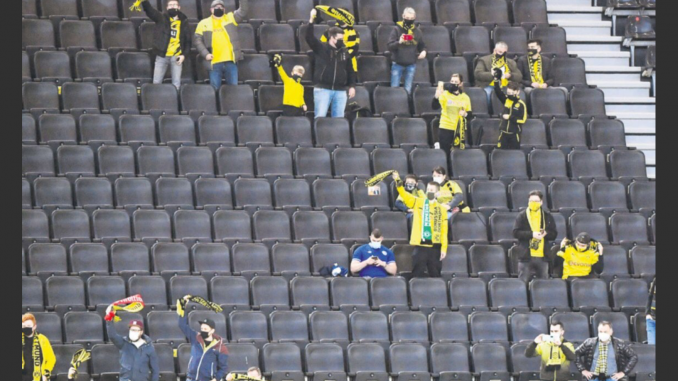 The Covid-19 restrictions meant that the attendance at the Signal Iduna Park was limited to just 300 for the Revierderby. One solitary Schalke fan manged somehow to blag himself a ticket and took his place amongst the other 299 supporters dotted around the stadium.

He probably wished he hadn’t bothered going to the lengths he did to get a ticket with another poor display from his side seeing them comfortably beaten by BVB and the Königsblauen woes continue with just one point from five matches and more problems than solutions for new coach Manuel Baum.

Facebook13Tweet0
About Mathew Burt 230 Articles
Former writer at Goal.com and JustFootball, I've been doing my thing for Bundesliga Fanatic since 2015. A long-suffering Werder Bremen fan and disciple of the Germanic holy trinity...Bier. Wurst und Fußball

Facebook49Tweet0 Julian Nagelsmann’s return to Hoffenheim was a happy one with his RB Leipzig side coming away with a 2-0 win to cement their place in the Bundesliga top three. For once however, it wasn’t […]

Facebook35Tweet0 The transfer of goalkeeper Alexander Schwolow from SC Freiburg to Schalke 04 looks increasingly likely with the Gelsenkirchen club paying €8 million. There is little doubt the 28-year-old is a fine keeper, but does […]

Five Questions Ahead of Bundesliga Matchday 27

Facebook9Tweet0 After the long-awaited return of the Bundesliga last weekend, we have another round of matches under the strange, new, fan-free regulations. Here we preview the upcoming action taking a closer look at some of […]