There has been much talk in the early part of the season over the merits of Borussia Dortmund playing with a back three or a back four. What should be being talked about at some length is the impact of Raphael Guerreiro- be it as the left wingback or as a traditional left back in a four.

It was as a left back in Borussia Dortmund’s back four that the Portuguese stood out and put in a man of the match performance on matchday 5 as the Schwarzgelben triumphed 3-0 in the Revierderby against Ruhr rivals Schalke. Having missed the start of the season with injury (deputised admirably by Felix Passlack) Guerreiro came in as the left wing back against Augsburg and Freiburg but was rested in the match with Hoffenheim. In those matches Lucien Favre opted for a three-man central defence with two players as wingbacks. Against Schalke at the weekend, the BVB coach switched to a flat back four with Guerreiro on the left. 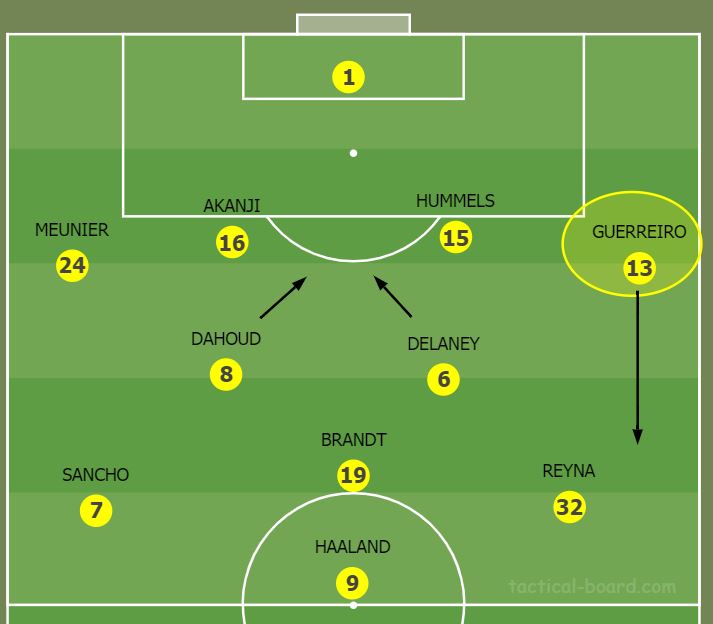 Although a 4-2-3-1 on paper, when in possession and with Mats Hummels starting attacking moves from the back, either Mahmoud Dahoud or Thomas Delaney would drop back to make a back three allowing the fullbacks on either side to push as high and as wide as they could. This allowed Guerreiro license to attack and his impact was greatest as an attacking weapon in the win over Schalke.

For a nominal left back his match stats were superb and not the sort of thing you usually see from a player in that position. With 148 touches he led the entire BVB team as well as completing the highest number of passes with 117 (seven more than Hummels) and enjoying an 86,7% completion rate. His progressive passing distance was the most of any Dortmund player at 791 yards and going forward he had the highest number of carries (121) and the highest progressive distance carried (329 yards).

He attempted five dribbles of which four were successful, had five shot creating actions, was involved in two goal creating actions and provided the assist for the opening goal. Defensively, he made five blocks, which was four more than anyone else.

The first goal in the 55th minute was a superbly worked corner on the right which saw Sancho and Guerreiro isolate Amine Harit, before combing with Julian Brandt. Guerreiro’s shot forced a fine save from Frederik Rönnow, with Manuel Akanji on hand to fire in the rebound. He also delivered the corner that led to Mats Hummels making the score 3-0 in the 78th minute.

Kicker Sportmagazin named Guerreiro as the man of the match and you will find few who would argue against that. He also earned a first appearance in their ‘Elf des Tages’ (team of the week). Dortmund’s left-sided star was simply immense against the Königsblauen– be it at the back, going forward with the ball, passing, blocking, or intercepting.

It was as they say in Portuguese ‘muito impressionante’ (very impressive).

Is it Time for Dortmund to Unleash Plan B?

The cancer diagnosis for Sebastien Haller on the eve of the new season changed everything at Borussia Dortmund and led to the club’s kneejerk reaction to sign Anthony Modeste from Köln. The move hasn’t been […]

After receiving a chastening lesson from RB Leipzig at the weekend, Borussia Dortmund produced a top defensive performance and looked set for a shock win against Manchester City before late goals from John Stones and […]