Borussia Dortmund came away from the Europa Park on Friday with a 3-1 away win over Freiburg to maintain their 100% start to the season. The simple score line however in no way reflects full story of the match, which was turned on its head by the four substitutes BVB coach Terzic sent on in the second period.

With 77 minutes on the clock Freiburg were still leading 1-0 thanks to a first half header from Michael Gregoritsch and were looking the more likely to add a second. Fast forward to the final whistle and it was the Schwarzgelben celebrating in front of their travelling fans having scored three goals of their own to stun the Breisgauer.

After having scraped to a narrow 1-0 ‘Arbeitssieg’ on the opening day against Bayer Leverkusen, BVB faced a Freiburg side, who had crushed Augsburg 4-0. Last season’s matchday 2 also saw Dortmund travel to Freiburg where they were beaten 2-1 by a side only enjoying 23% of the possession. 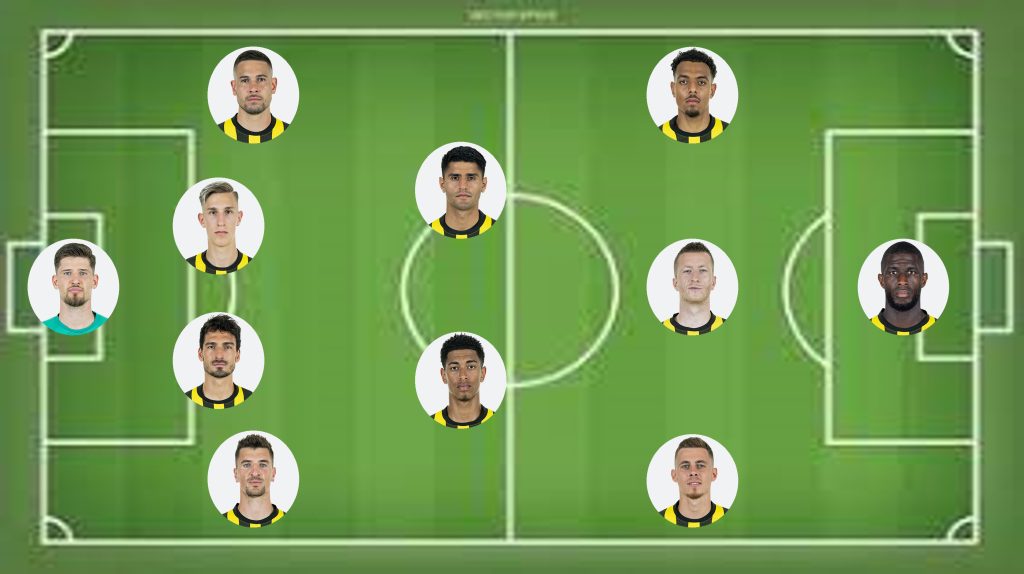 Two changes were made by Dortmund coach Terzic from the Leverkusen win- Thorgan Hazard in for the injured Karim Adeyemi and new signing Anthony Modeste making his debut in place of youngster Youssoufa Moukoko. A slight change in formation from a 4-3-3 to a 4-2-3-1 was also implemented.

For much of the first half Dortmund really struggled to get their game together despite enjoying the lion’s share of possession. Misplaced passes, under hit passes, over hit passes and a general disconnect in their play meant there was a lack of rhythm and Freiburg were easily able to soak up any BVB attacks. Nicolas Höfler and Maxi Eggestein in the centre of midfield were also doing a good job in disrupting Dortmund’s build-up play. Thomas Meunier at right back was being overwhelmed slightly with a combination of Vincenzo Grifo and fullback Christian Günter. The Belgian was also yellow carded for a foul on Roland Sallai.

The changes that changed the game

The first change Terzic made was to send on Marius Wolf for Meunier at half-time. With the game seemingly escaping from them, Terzic then sent on youngster Jamie Bynoe-Gittens for Hazard on 64 minutes, brought on Moukoko for a disappointing Donyell Malen after 70 minutes and then sent on Julian Brandt for Mahmoud Dahoud on 76 minutes.

Almost immediately following Brandt’s introduction Dortmund were level. Wolf advanced down the right, played the ball inside to Gittens, who played a one-two with Moukoko. A speculative long-range effort looked set to be gathered easily by keeper Mark Flekken, only for the Dutchman to produce a howler and let it in. BVB were amazingly level.

Bynoe-Gittens was involved again seven minutes later when Dortmund took the lead. A direct, mazy dribble dragged defenders out of position before he slipped a pass to fellow substitute Julian Brandt. His flick fed Moukoko, who fired in from close range.

With the subs having turned the game, there was still time to add a third in the 88th minute. Moukoko and Wolf combined on the right to dispossess Phillip Lienhart and Wolf cut inside before curling a fine individual effort past Flekken to put the icing on the cake.

Nico Schlotterbeck: “We got off to a good start, but then the opening goal happened. After that, Freiburg were all over us until the break. They had eight or nine set pieces, but we managed to defend them relatively well.

“I know from experience that they’re very good at doing that. The second half was a bit disjointed. Then, Flekki was unfortunate to make that mistake. After that, we scored two more goals and decided the game in our favour.

Edin Terzic: “It was another intense game – like so often against Freiburg. We got into the game properly and were able to get through a couple of times in the first 30 minutes. And then the quality came from Freiburg, and we had to fight not to concede the second goal. After the somewhat fortunate equalizer, our foot stayed on the accelerator.”

Youssoufa Moukoko: “We fought for the coach, for the fans and for us. In the end you saw the emotions. We didn’t start the game well and after Freiburg were 1-0 up it got even more difficult. We needed luck today. After Jamie made it 1-1, we were fully in the game. I always felt like we could turn the game around.”

Marius Wolf: ” When I’m on the pitch, I want to help the team; no matter how many minutes it is. We were behind, but we didn’t let ourselves be deterred. We stuck to our plan and forced victory. Today it was unfortunately a goalkeeper error from Freiburg’s point of view. But we needed that goal. It unleashed power again.”

The capture of one of Germany’s most sought-after talents last summer was supposed to give Borussia Dortmund that little extra percentage they needed to usurp Bayern Munich as the top dogs in the Bundesliga. Julian […]

It is a problem that nearly every other Bundesliga coach would dearly love to have. Even calling it a problem would seem obscene to many a club struggling to afford such quality, but in the […]

Is it Time for Dortmund to Unleash Plan B?

The cancer diagnosis for Sebastien Haller on the eve of the new season changed everything at Borussia Dortmund and led to the club’s kneejerk reaction to sign Anthony Modeste from Köln. The move hasn’t been […]