Hot on the heels of matchday one came the second weekend of the new Bundesliga season and as usual we were treated to superb atmosphere, top talent, great goals, and entertainment galore. So just who where the winners and losers from Matchday 2?

In one way, it is the players who decide matches, but in another way, it is the trainer and his choice of players/ tactics that determines the outcome. This was in evidence on Friday as Edin Terzic’s substitutes in the second half completely turned the game in Borussia Dortmund’s favour.

Trailing 1-0 after 77 minutes, BVB managed to turn the game on its head and emerge as 3-1 victors with subs Marius Wolf, Jamie Bynoe-Gittens, Youssoufa Moukoko and Julian Brandt involved in all three goals.

Some choices pay off, others backfire. On Friday Edin Terzic made all the right calls.

One of the stand-out subs introduced by Terzic was English 18-year-old Jamie Bynoe-Gittens. With the history of success enjoyed by Jadon Sancho and Jude Bellingham, a lot is expected of the attacking player. His shot from distance led to the howler from Mark Flekken for the equaliser, but then if you don’t buy a raffle ticket, you’re not going to win the massive teddy.

It was Bynoe-Gittens’ direct dribbling run at the Freiburg defence that led to the second scored by Moukoko. Overall, a very fine cameo display and the pressure will now be mounting to hand him a starting berth.

After their heavy loss last weekend, it looked like Augsburg were on a hiding to nothing as they travelled to the Bay Arena on Saturday to face a Bayer Leverkusen side keen to kick-start their own season. Having never beaten the Werkself in 22 previous Bundesliga meetings, another hard afternoon looked on the cards for Enrico Maaßen’s side.

However, goals from Fredrik Jensen and substitute Andre Hahn, combined with a fine goalkeeping display from Rafal Giekiewicz saw the Függerstädter finally break their Leverkusen hoodoo.

Speaking after the final whistle coach Maaßen was understandably delighted with the three points. “This was our first ever win over Leverkusen, so we’re absolutely delighted. We were up against a very good team, but we wanted to be bold, and I think you saw that in the first half. The first 25 minutes were really good. Leverkusen began to take control after that, albeit without having any clear-cut chances. 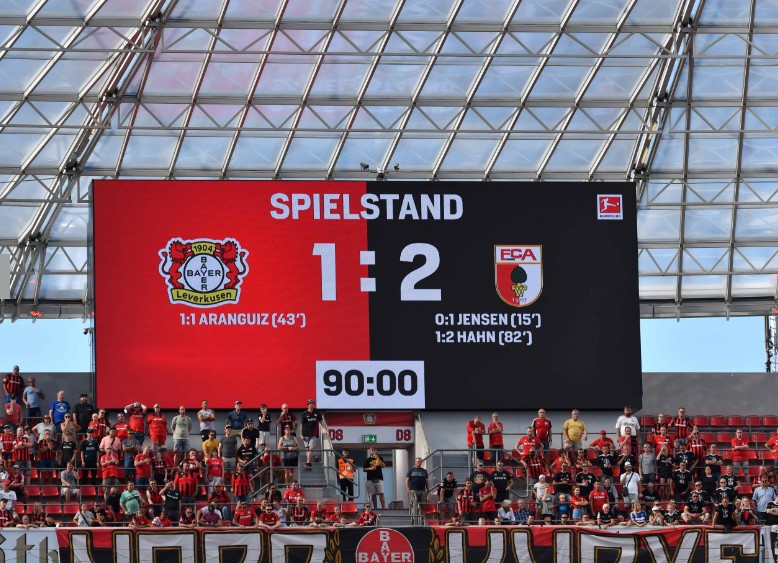 “They did have some massive opportunities after the break though, but we had the necessary luck, a brilliant goalkeeper and sheer determination. We had the sense that today offered us a real opportunity; we wanted to take advantage of that moment as it’s the kind of thing that can carry you through the season.”

Both promoted sides Werder Bremen and Schalke looked set for opening defeats at home on Saturday as they both trailed 2-1 going into injury time. Both however staged incredible fightbacks to rescue a point with late equalisers.

Werder’s Scottish attacker Burke first arrived in the Bundesliga in 2016 with a €15 million move from Nottingham Forest to RB Leipzig. Back after a nomadic career the 25-year-old popped up at the perfect moment with almost the last kick of the game to rescue a point for the Grün-Weißen against VfB Stuttgart.

Schalke too were on the verge of defeat at home to Borussia Mönchengladbach, only for former Union Berlin attacker Marius Bulter to grab a share of the spoils with a 93rd minute penalty.

Get used to seeing the Bayern attackers name in the ‘Winners’ section’ of this feature this season. After a two-goal start to the new season against Eintracht Frankfurt last week, he added another goal to help the Rekordmeister to a 2-0 home win over VfL Wolfsburg.

After Sadio Mané saw an effort ruled out through VAR, Bayern took the lead just after the half hour mark with Thomas Muller finding Musiala on the edge of the box. The youngster turned on a sixpence and hammered the ball past a helpless Casteels for the game’s opener. Robert Lewandows-who?

With 77 minutes on the clock, Freiburg looked to be on course for a second win of the season on Friday night against Borussia Dortmund, only for a calamitous error (ein Patzer) from keeper Mark Flekken to hand BVB a way back into the match.

A seemingly harmless long-range shot from substitute Jamie Bynoe-Gittens looked to be meat and drink for the Dutch keeper. However, his complete misjudgement of the flight and inability to recover once he’s fumbled led to the goal. With their tails up, Dortmund went on to win the game 3-1

After exiting the DFB Pokal in the first round to minnows SV Elversberg and suffering defeat to Borussia Dortmund last weekend in their Bundesliga opener, the scene seemed set for Bayer Leverkusen to get their season up and running at home to an Augsburg side well beaten last weekend by Freiburg.

Augsburg clearly hadn’t read the script and came away from the Bay Arena with a 2-1 win to inflict more misery on the Werkself.

“We lacked fluidity in our game and the opponents were obviously also involved with that as they regularly succeeded in breaking our rhythm” trainer Gerardo Seoane said after the match. “We lacked calm and being clinical in front of goal.”

Captain Jonathan Tah adopted a similar view: “We managed to get into the box, but we were not clinical enough” and he added: “We are also letting in goals too easily and we expect more of ourselves. Of course, we are all disappointed. But we’re all in the same boat and we’ll do better next week.”

The only solace Freiburg keeper Mark Flekken can take from his Patzer against Dortmund is that it happens to other keepers, and this weekend he is joined in the goalkeeping ‘Hall of Shame’ by Köln’s Marvin Schwäbe.

So impressive last season as he edged out Timo Horn as first choice, the Geißbock custodian looked far from reliable as he allowed Timo Werner’s long-range effort to squirm through him for Leipzig’s opener on Saturday.

Schwäbe’s error handed the lead to Leipzig, but then the sending off of attacker Dominik Szoboszlai just before half-time handed Köln an advantage in their quest to leave the Red Bull Arena with points.

In injury time at the end of the first 45 minutes, the game was stopped after a foul by Florian Kainz on Szoboszlai. Annoyed by the foul, the Hungarian looked to push away the midfielder with him arm. Although, unintentional he caught Kainz in the throat with his elbow and was rather harshly given a straight red card by referee Benjamin Brand.

He Said What? The Bundesliga Matchday 13 Trainer Soundbites

The final whistle blows, and the dust settles on the previous ninety minutes. But the press soon wants to get the opinions from the Bundesliga trainers whether they have won, lost, or drawn. Here’s what […]

The matches are coming thick and fast for the Bundesliga’s European contenders after the internationals and a return to domestic action. Important Champions League points are on offer as the group stage starts to take […]