Hot on the heels of matchday one came the second weekend of the new Bundesliga season and as usual we were treated to superb atmosphere, top talent, great goals, and entertainment galore. So just who were the winners and losers from Matchday 3?

Wow! Just wow! There is not a lot that can be said about the incredible events at the Signal Iduna Park on Saturday, except that football never fails to surprise you and predicting anything is a dangerous game.

2-0 down entering the 89th minute was tough on Werder, who had given BVB a really tough afternoon and been hit with two sucker punches in either half by Julian Brandt and Rafael Guerrero. Ole Werner’s three substitutes (mirroring what Edin Terzic achieved last week) however turned the game completely on its head.

A well-taken goal from Lee Buchanan seemed little more than a consolation before Niklas Schmidt headed in Amos Pieper’s cross for a superb equaliser in the 93rd minute. Happy with a deserved point? Not Bremen, and they pushed on with Oliver Burke rifling home a sensational winner in the 95th minute.

Werder Bremen is the first team in the last 13 seasons of the Top 5 European leagues to win when trailing by multiple goals entering the 89th minute. Teams were previously 0-8511-18 (W-L-D) under such circumstances.

The positive vibes continue at Union Berlin as they carry on performing way above their stature. The strange is that it is not surprising anymore and beating RB Leipzig (again) seems the norm. The strike duo of Jordan Pefok and Sheraldo Becker grabbed a goal and an assist apiece as they show that they can more than compensate for the loss of Taiwo Awoniyi.

They were incisive going forward, tenacious in midfield and showed a great defensive determination in the last twenty minutes as Leipzig upped the pressure on their goal. The Eisernen look to be carrying on from where they left off last season- on the up.

After losing their last five visits to Augsburg, the omens were not great for Mainz as they looked to keep up their good start to the season. A third goal of the season from Karim Onisiwo gave them the lead only for a clever flick from Ermedin Demirovic to equalise minutes later.

With the game headed for a draw, an injury time corner was headed home by substitute Jae-Sung Lee. Seven points out of nine is a great start from the Nullfünfer with Sporting Director Martin Schmidt certainly a happy man. “We deserved the goal at the end because across the 90 minutes we were more willing, more aggressive and we wanted it more. You could see that especially in the final half an hour. We were dominant and we kept getting into Augsburg’s penalty area.

“Bo made attacking substitutions that helped us win the game. Our desire to win this game has been bubbling all week and it finally came to a head in the 93rd minute.”

Thielmann was the scorer of a candidate for Goal of the Matchday, if not Goal of the Month with his stunning strike to equalise in the second half against Eintracht Frankfurt. The fact that they took an age to look at the VAR for a possible offside obstruction from Florian Dietz added to the excitement surrounding the goal. If would have been a crime had such a quality finish been chalked off.

Ansgar Knauff’s headed clearance fell out of the sky and Thielmann adjusted his body well before volleying in superbly from 18 meters out into the bottom left corner leaving keeper Kevin Trapp no chance.

Are we handing the Bundesliga title to the Bavarians already? Not quite, but Sunday’s 7-0 demolition of Bochum made them the only side with a 100% record at the start of the season and saw their goals tally rise to 15 scored in three games (one conceded).

Having lost 4-2 in the corresponding fixture last season, revenge was on the cards. Despite not having Jamal Musiala or Alfonso Davies available through injury, the ability to bring in Kingsley Coman and Leroy Sané cushioned the blow. Coman and Sané both scored and Sadio Mané bagged two to assuage any doubters that Bayern would miss Robert Lewandowski. 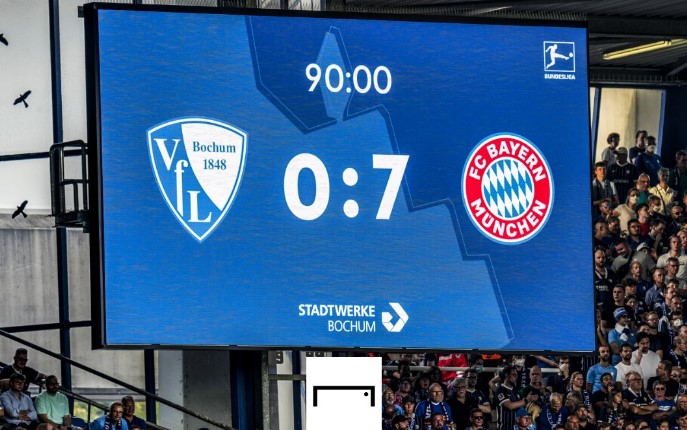 Oh dear, and Borussia Dortmund thought they had a bad afternoon! Last seasons Champions League qualifiers were being tipped to perhaps be one of the main challengers to Bayern for the title. A first round Cup defeat and now three defeats on the bounce in the Bundesliga and all that seems a pipedream.

Leverkusen were outfought and outclassed by Hoffenheim at the BayArena on Saturday and the visitors fully deserved their 3-0 win. Looking at the raw stats, the Werkself led in terms of possession (56%), shots (14) and passing accuracy (82%), but the scoreboard is what counts in the end.

“Four defeats in a row is a difficult situation for all of us” trainer Gerardo Seoane said after the loss. “We have to stick together, be self-critical and address some things clearly. But we also have to look forward together, demand even more from each other and stand together.”

A trip to high-flying Mainz beckons next week.

Sometimes you win ugly, but you take the points. Borussia Dortmund didn’t really deserve three points, but going into the 89th minute, they were heading for a perfect 100% start to the season. Fast-forward six minutes and they are trudging off with nothing and watching the Werder players celebrating a sensational win in front of their 8000 travelling fans.

The ’mentality’ issue has long been raised with BVB and it is hard to argue on the back of this result that it is not a factor. You lose games and sometimes you have to accept it. What a team supposedly challenging for the title cannot accept however is losing at home when you are leading 2-0 in the 89th minute.

“I have no idea what just happened” Marco Reus said at the final whistle. “If I knew, we would have stopped it happening. We had no control over the game even though we were 2-0 up — that was the case for the whole 90 minutes. Then Bremen pulled one back in the 89th minute and then came to life. But in the end, we just didn’t play well enough throughout the game.”

Having taken the lead in the first half via an Alassane Plea penalty, it seemed an obvious choice when Borussia Mönchengladbach were awarded a second spot kick in the second half. No so. Despite scoring his penalty, Plea was overruled by Jonas Hofmann and denied the chance to double his tally.

Hofmann saw his effort saved by Oliver Christensen to add further fuel to the fire as to who should have taken it. “I had a good feeling for my penalty, that’s why I stepped up” Hofmann confessed after the match. “I have to admit that I didn’t hit it well though. Fortunately, we ended up winning the game, so I’m sure the team won’t hold it against me.”

Maybe not but expect the next penalty to be taken by Plea, Thuram, Bensebaini, or anybody else.

After three matchdays, Bochum join Bayer Leverkusen as the only team yet to register a point. They can consider themselves unlucky in their first two games, but against Bayern they were simply annihilated.

Last season’s 4-2 win from February was quickly forgotten and they were reminded that they lost by the same score (7-0) at the Allianz Arena last September. A day to forget for VfL.

Dahoud was forced off in the first half against Werder Bremen with what looked to be a dislocated shoulder (a recurrence of a previous problem). The German midfielder had a lively start against the Northern visitors, firing just wide in one of BVB’s rare moments of positivity in the first half.

“His shoulder popped out, he couldn’t carry on” Edin Terzic explained after the game. “In the first few minutes, we forced Werder to go the long way around us — and Mo was a key factor in that because he always knew where the full-backs were, and he can always keep the ball in tight situations. We hope that he will be ready for action again very soon.”

Just a few weeks after Bayern Munich triumphed in the Champions League to clinch another treble, the 2020-21 Bundesliga seasons gets underway with the shadow of the corona virus crisis hanging over it. The new […]

The 2019-20 Bundesliga season is set to resume this Saturday, May 16, pickig up with Matchday 26. With 25 rounds already played, nine remain to get to the conclusion of what has been an eventful […]