There of course needs to be a reaction from Borussia Dortmund after the sensational way they lost to Werder Bremen last weekend. However, looking beyond the capitulation in the last few minutes and deeper into the entire 90 minutes and the first half against Freiburg, could it be time for trainer Edin Terzic to mix things up?

From four to three

The fact that Borussia Dortmund signed both Nico Schlotterbeck and Niklas Süle in the summer to add to central defenders Mats Hummels and Manuel Akanji, meant that trainer Terzic had plenty of options in the centre of his defence.

Back in July before the season started, he admitted that the personnel available to him allowed him the option of playing a back three instead of a back four. “A back three is definitely an issue. We want to prepare for everything. Not only have we played with a back four in the past, but there have also been one or two games where we started with a back three.

“No coach will complain about the quality of the squad. We want to create a certain performance culture. There are no promises for any minute. The only promise I make to every player is that you can work for anything in our team. ”

So far this season, BVB have lined up in a 4-2-3-1 formation with Hummels and Schlotterbeck paired in the centre, Raphael Guerrero at left back and Marius Wolf seemingly replacing Thomas Meunier at right back. Mahmoud Dahoud has sat just in front to help with distribution, which has been identified as an area of weakness by the coach. 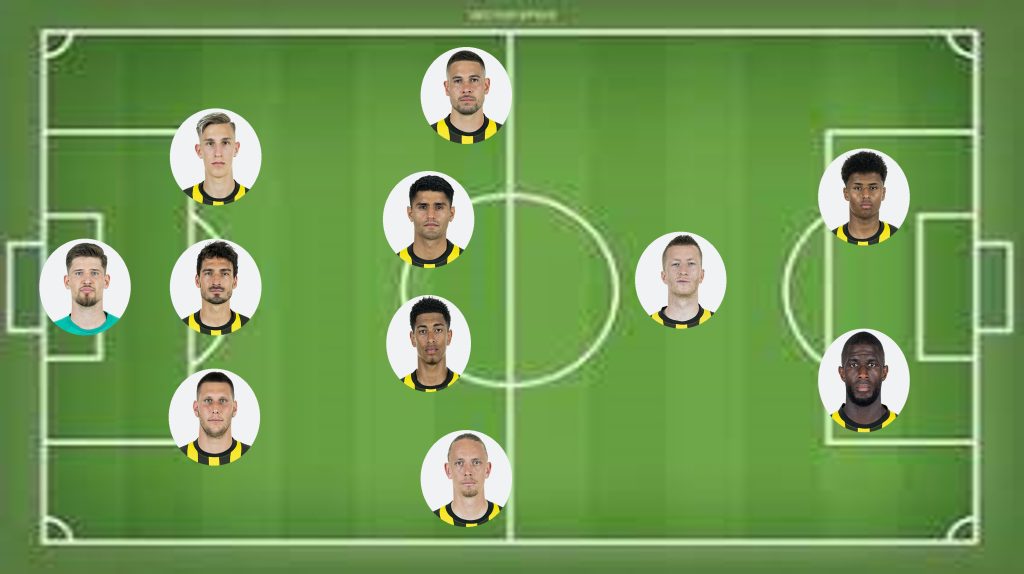 Dortmund travel to the capital this weekend for the matchday 4 clash with Hertha Berlin- a side winless so far. Despite not impressing at all after coming on against Werder and looking short on sharpness and speed, Niklas Süle could get his first start at the Olympiastadion as part of a new-look back three. He needs game time to get up to speed and the added centre back in theory provides more protection for Gregor Köbel.

Guerrero and Wolf are naturally more attacking than defensive in the fullback role so pushing them forward should attune with their natural instinct. Hertha however has the speedy Dodi Lukebakio on the right and Chidera Ejuke on the left and they will be looking to exploit any space left by the marauding Guerrero and Wolf.

Mahmoud Dahoud should be fit to start after his shoulder injury forced him off against Werder, but Salih Özcan is rumoured to be close full fitness and ready to make an appearance.

By leaving out Jamie Bynoe-Gittens, Thorgan Hazard, Donyell Malen (injured) and Julian Brandt, a lot of the attacking creative burden will fall on the wing backs and captain Marco Reus. Anthony Modeste has been starved of service thus far so he will be looking to see crosses coming in from both flanks. With Karim Adeyemi also back in the picture following injury, he could partner Modeste to share the burden.

BVB need a reaction. Six points from their first two games flattered a little and papered over the cracks. They were outperformed by Werder last weekend and even at 2-0 up, the score line was harsh on the visitors. Whether the reaction will come from a change of personnel (Süle, Özcan, Moukoko) or through a change in formation to a back three remains to be seen.

Anything less than three points from the Olympiastadion will be a disappointment and have the naysayers out in force.

Champions League Matchday 5 Preview- The Group Stage Heat is On

It’s the penultimate matchday in the Champions League group stage and it is all to play for some, while others have already sealed their passage to the next stage. With potentially vital points on offer, […]

There is a very good reason Borussia Dortmund are not overly concerned that they don’t have any like for like cover for striker Erling Haaland. That reason is a certain 15-year-old wonderkid in their youth […]