As a goalkeeper, to finish as Man of the Match and still leave the pitch having lost the game must be hugely frustrating. That frustration however was tempered with more than a little self-loathing for Bochum keeper Manuel Riemann last night as the blame for the Freiburg defeat lay largely at his feet. It was a night of drama, glory, and ultimately tragedy for the VfL custodian.

It has been quite a week for Manuel Riemann. Last weekend at the Vonovia-Ruhrstadion he had to pick the ball out of his net seven times as visitors Bayern Munich ran riot. He was helpless as the Bavarians seemed able to score at will in the first half. To pick yourself and prepare for the next game must take more than a pinch of mental strength.

So, to the Black Forest and an away clash with Freiburg. With three successive defeats, Bochum need the points, but the hosts wanted their first home win of the season. They started well with Christian Günter forcing Riemann into a save ten minutes in. The 22nd minute saw the first of what would become a host of breath-taking double saves from the 33-year-old keeper- the glory side of his evening.

He had to get down well to parry a powerful left-foot shot from Michael Gregoritsch fired in from the edge of the box. Roland Sallai was instantly on the loose ball, but Riemann was back on his feet to pull off another stunning save. Luckily, Nicolas Höfler fired the second loose ball wildly over.

The second half then began with further drama for the Bochum keeper. With the conditions very tricky after a massive deluge of rain, Riemann dropped what looked like a run-of-the-mill high cross at the far post. In panic he then pulled down Sallai for a penalty- which strangely wasn’t given at first by the referee Marco Fritz. After a look at the pitch side monitor however it was obvious. 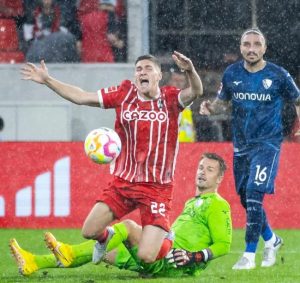 Up stepped Vincenzo Grifo only to be denied by a dive to the left. Again, the ball was loose and Freiburg’s midfield talisman looked to head the rebound into an empty net. Riemann though was up again and pulled off a second superb save to keep the ball out. However, with little help arriving from his defenders, Grifo was able to bundle the ball in at the third attempt.

Bochum were having their chances to equalise with Gerrit Holtmann looking dangerous and hitting the post. Freiburg then had a great chance to wrap it up in the 72nd minute when Grifo’s cross found Gregoritsch at the far post. His goal-bound header was once again kept out by a superb save and then he was denied by the post on the rebound. Grifo’s header was then grabbed by the Bochum keeper.

Riemann was arguably the Man of the Match for his heroic saves which at times had you rubbing your eyes wondering how the ball wasn’t in the net. However, he moment of madness in dropping the ball and dragging down Sallai meant all his travails counted for nothing and Bochum remain pointless after four matches.

The tale of the tape:

Thomas Reis: “We were made to pay for our mistakes a lot last week. In contrast, a lot of the things we set out to do, we did very well today. It’s a shame that the game is decided by this one action where the video referee intervenes. For me, the penalty wasn’t a clear mistake. Both teams had many chances. We haven’t had as many chances as today in the past few games. I’m absolutely positive about our performance. If we continue to play in this way, we will definitely get the points we need.

Simon Zoller: It’s very annoying that we leave here without any points. One chance has to go in at the end, then the game ends in a draw. On the positive side, we showed a different side of us. We got back to what made us strong the last two years. That has to be the way to get points again. We were very passionate and tried everything. But if you don’t take your chances, you can’t complain about losing the game.

Five Questions Ahead of Bundesliga Matchday 11

With just four weeks until the World Cup and the mid-season break, the DFB Pokal matches give way to another round of exciting Bundesliga action. Here we look at five talking points ahead of the […]

Just a single point and a single goal separated SC Freiburg from a place in next season’s Europa League with VfL Wolfsburg pipping the Breisgauer to 7th spot in the Bundesliga. Disappointing for sure, yet […]

The Bundesliga’s bottom side VfL Bochum have named 54-year-old Thomas Letsch as their new coach in succession to Thomas Reis. The new man at the helm at the Vonovia Ruhrstadion comes from Dutch side Vitesse […]