The sixth matchday of the 2.Bundesliga provided plenty of goals, late drama, a share of the spoils in the top of the table clash and more trouble for those at the bottom. Here’s a round-up of the weekend action.

Going into the weekend Darmstadt were second with FC Heidenheim two points behind in third and the two clashed at Stadion am Böllenfalltor. The visitors had to twice come from behind after goals from Braydon Manu and Frank Ronstadt put die Lilien in front. Patrick Mainka equalised first in the 70th minute before Tim Kleindienst replied again in the 82nd.

The leaders Paderborn were unable to take advantage of the shared points as they could only draw 2-2 with St. Pauli in a game with a crazy finish at the Millerntor. Marvin Pieringer put Paderborn ahead in the first half before Leart Paqarada missed a penalty at the start of the second half. The final six minutes however saw three goals and one disallowed.

Highlights 🎥: St. Pauli and SC Paderborn play out thrilling draw featuring a spot of injury-time madness. Not to be missed!#Bundesliga2 pic.twitter.com/IlEwvKMyNq

First, Etienne Amenyedo equalised for St. Pauli in the 84th minute only for Sirlord Conteh to have a reply ruled out 60 seconds later. Conteh thought he had scored the winner in the 92nd minute only for the hosts to keep going and grab another equaliser through David Nemeth a minute later.

That wasn’t the only crazy draw from the matchday with Kaiserslautern starting the weekend in fourth sharing eight goals with Magdeburg in a 4-4 draw. After Terence Boyd put the Red Devils ahead early on, they then conceded three goals in the opening 20 minutes with Moritz Kwarteng grabbing two.

A headed goal just before half time from Boris Tomiak reduced the gap, before second half goals from Philipp Hercher and Mike Wunderlich (penalty) put them in front. The visitors however weren’t done and an own goal from Tomiak got them back level.

Hamburg have moved up to third after a 2-0 win away at FC Nürnberg, while Fortuna Düsseldorf have also climbed to fifth after a 4-0 home win over Jahn Regensburg with all four goals coming in the last half an hour. Holstein Kiel beat Sandhausen 1-0, and Karlsruher SC overcame Hansa Rostock 2-0.

Hannover heaped more misery on struggling Greuther Fürth with a 2-1 win at their Heinz von Heiden Arena. The visitors looked good for a point until former player Havard Nielsen popped up in the 86th minute with a winner.

Bottom side Eintracht Braunschweig had opened the weekend on Friday away at fellow bottom side Arminia Bielefeld in a real ‘Kellerduel.’ Three goals in nine first half minutes put die Arminen in control. They did pull one back in the second half via Immanuel Pherai, but a fourth from Masaya Okugawa sealed a comfortable win. 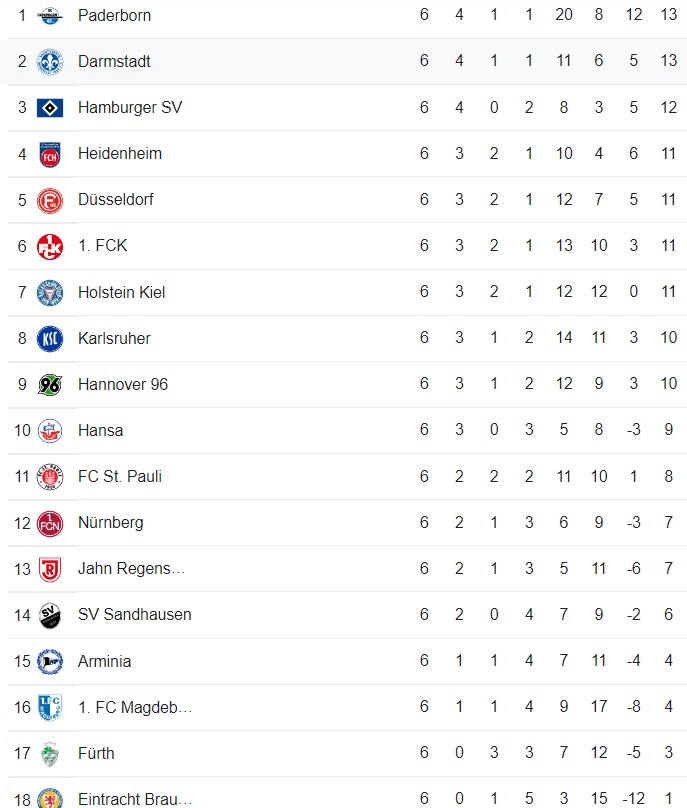 By 16:30 CET on Saturday one team will be on their knees contemplating relegation to the 2. Bundesliga, while the other will be celebrating winning the reprieve of reaching the play-off. Werder Bremen and Fortuna […]

The Winners and Losers of Bundesliga Matchday 31

The Winners Werder Bremen In their must-win relegation six-pointer against Paderborn, Werder did exactly that and won with a display few saw coming. Their performance which saw them score five against their fellow strugglers was […]