After suffering the unthinkable relegation to the second tier to join Northern rivals Hamburger SV in 2021, Werder Bremen returned to the Bundesliga at the first time of asking under the guidance of Ole Werner. As an ‘Aufsteiger’ many wondered how the Grün-Weißen would fare back in the topflight after their time away. Wonder, no more as Bremen have begun the new season with a fighting spirit that is already showing signs that they have what it takes to stay up.

The team is the star

Werder were not extravagant spenders in the summer with only midfielder Jens Stage costing a fee (€4 million) from FC Copenhagen. Amos Pieper arrived on a free from relegated Arminia Bielefeld as did Niklas Stark from Hertha Berlin. British duo Oliver Burke and Lee Buchanan were somewhat surprise acquisitions, while Mitchell Weiser joined permanently for nothing after a successful loan from Leverkusen. 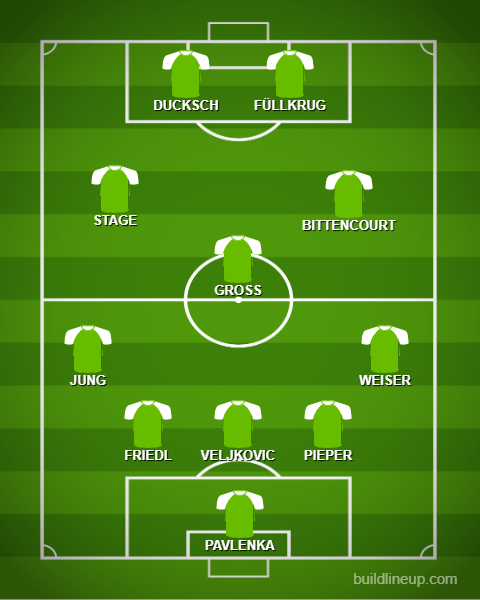 A win, two draws and a loss have seen Werder take five points from their opening four games, but the story behind the points tells much more about this side. They gave a good account of themselves in the season opener away at VfL Wolfsburg in a 2-2 draw before showing their mettle in their first game at the Weser Stadion. Looking like they were set for defeat at 2-1 down, a 95th minute equaliser from substitute Oliver Burke rewarded their fighting spirit and earned a point.

That spirit was once again full effect at the Signal Iduna Park on matchday 3 with a fine first half display against Borussia Dortmund. Finding themselves 2-0 down with only a minute left of normal time was a tough blow to take. In fact, it was they took and came back swinging from. An 89th goal from Lee Buchanan seemed a mere consolation before Niklas Schmidt grabbed a sensational headed equaliser on 93 minutes. Content with a point? Not these players and Oliver Burke duly raced forward in the 96th minute to drill the ball past Gregor Köbel.

Matchday 4 saw a first defeat with Eintracht Frankfurt winning 4-3, but not before Niclas Füllkrug had fired in a 92nd minute penalty to set up a grandstand finish with a flurry of corners causing panic in the Eintracht back line and raising hope amongst the Werder faithful.

The future is bright (green)

That hope wasn’t ultimately rewarded, but there is very much a hope (or rather belief) this team will have enough to stay in the Bundesliga, which is always a promoted sides first priority. That fan excitement is certainly being felt by striker Niclas Füllkrug.

“On the one hand, maybe it’s still a bit of a hangover from getting promoted, but on the other hand, you can really feel it in the city. Whether I’m going shopping, taking my little girl to the playground, or just taking a stroll through the neighbourhood, I get spoken to by people who know me and strangers alike, telling me that they’re proud to be a Werder fan and that their city is back on the map.

“That they think it’s great and are very grateful for it, so you can really see again that Werder has a huge influence on the mood of the people here. I hope, of course, that we can keep this up. It really gives us strength, and every home fixture is like a party. That is what gives you that extra energy to go out and score another goal or defend that little bit harder.”

Anthony Jung, who has made the left wingback slot his own, also feels the team spirit will be key this season. “We obviously have a lot of individual quality. You have seen that now, even outside of the first eleven. I think that we live off our team spirit and we have to keep doing this.

“It was clear to us from the beginning that with the team spirit we have, if we keep doing what we’re doing, then we are able to play like there is an extra man on the pitch.

“We are still going with the flow that we had before in the second division. It has gone really well for us to just take this with us and continue as we were.”

As the legendary former national team trainer once said: “Nach dem Spiel ist vor dem Spiel” (after the game is before the game). One game finishes, and another arrives hot on its heels. Matchday 7 […]

Five Questions Ahead of Bundesliga Matchday 30

The 2019-20 Bundesliga season is finally on the homeward straight as we enter the business end of the campaign. The runners and riders are jostling for position both at the head of the pack and […]