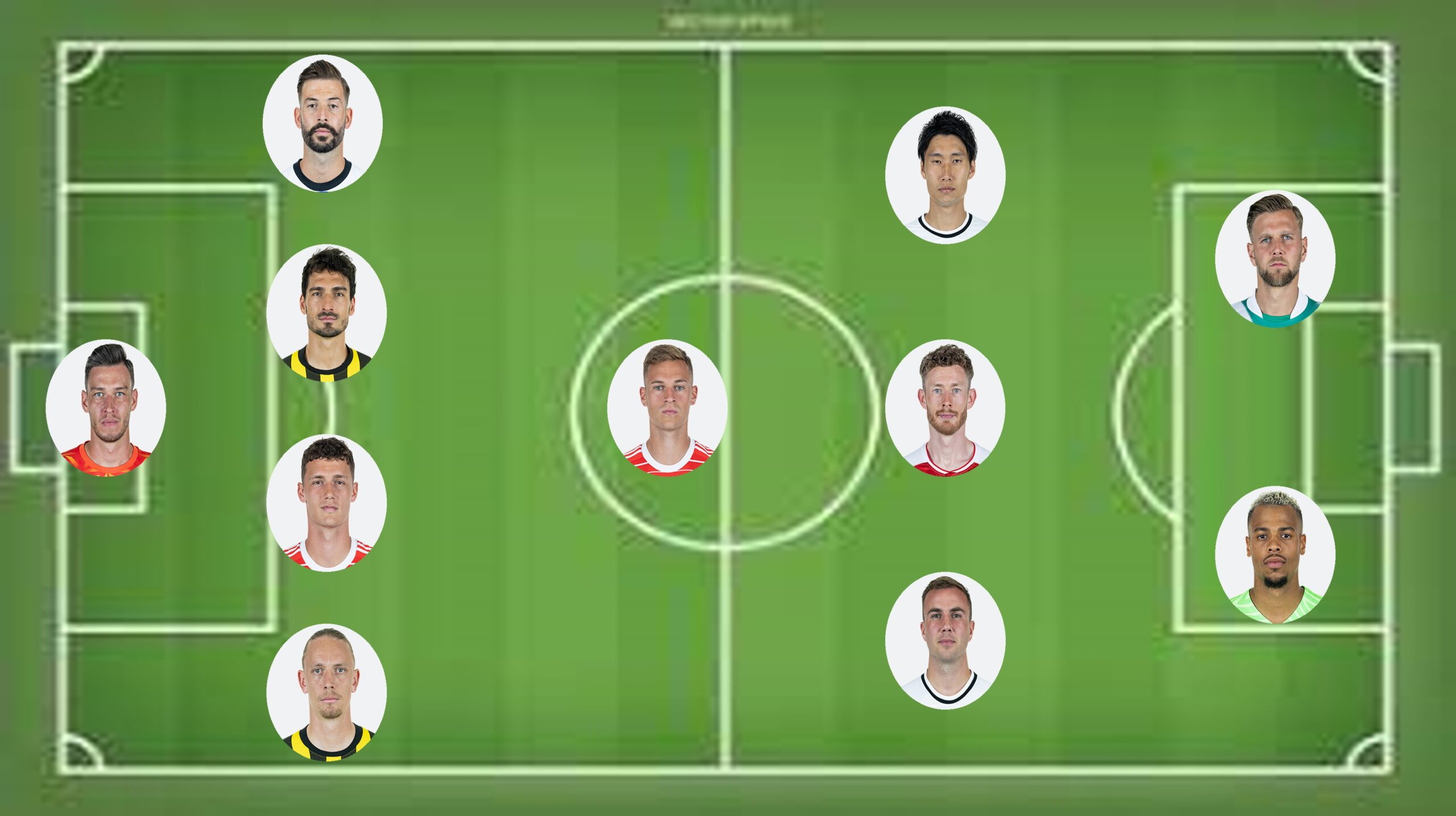 The late goals will grab the headlines, but Bremen’s keeper deserves his share of the plaudits. Pavlenka was forced into a fine save in the very first minute and continued to keep Werder in the match throughout and denied Bochum whenever they threatened with a series of impressive saves.

Déjà-vu? Yes, Pavard is in the Team of the Week yet again but find a better defender/ attacker in the Bundesliga and you’ll see his name omitted. As it is the Frenchman continues to perform at an outstanding level game after game and deserves his place. Against Union he was very good both in his defensive and offensive capacities.

The partnership between Hummels and Nico Schlotterbeck is blossoming nicely and either could have made the Team of the Week. This time around Hummels got the nod for a solid display against Hoffenheim on Friday to help keep a second successive clean sheet and send BVB temporarily top of the table.

Wolf has quietly come in under the radar this season and excelled in the fullback position. Against Hoffenheim on Friday he was asked to play on the left with Raphael Guerrero ill and he once again played very well both defensively to keep Georgino Rutter quiet on that flank, but also offensively. He got to the bye line often (it was his cross that should have won the penalty from Ozan Kabak).

There is more to Plattenhardt than laser accurate free kicks and pinpoint deliveries from set-pieces, but that is a large part of his arsenal. The best kept beard in the Bundesliga provided the exquisite cross that literally meant that Dodi Lukebakio just had to make contact to score the opener against Augsburg. His defensive duties were not ignored as the home sides attack became blunter as the game progressed.

I might as well ink Kimmich’s name in for the rest of the season for the Team of the Week. Quite literally he stands head and shoulders above the other players in his position in the Bundesliga. His finish for the equaliser against Union was flawless and the timing of the goal was also very important as it stopped the hosts building up too much momentum following their opener.

Frankfurt dominated RB Leipzig on Saturday and Mario Götze was the fulcrum around which the impressive team performance turned. The 30-year-old was at the heart of everything instigating attacks and keeping the pressure on the visitors. He had the most ball contacts for the Adler (79) and also ran more than any other player on the field (11.5 kilometers).

A goal from the penalty spot and three assists capped the perfect afternoon for Kainz as he inspired Köln to a 4-2 away win at Wolfsburg. With four shots on goal, Florian Kainz was the player with the most shots and, with 77% of his duels won, was also the best player in the match for this category.

Finding out that Japanese star Kamada was staying at the club despite plenty of transfer window speculation came as the most welcome news to Eintracht fans and his display against Leipzig (in tandem with Götze) showed just why. He scored the opener and was a creative spark throughout.

Werder were made to work for their win over Bochum, but the fact that it was Niklas Füllkrug who was throwing himself into a diving header in the final minutes of a game having just seen the opposition have a goal ruled out will come as no surprise. He added a second in stoppage time coolly slotting home from the penalty spot. He is now the league’s joint top scorer with Sheraldo Becker with five.

The only bright spot for Wolfsburg on a miserable afternoon was the goals of young German striker Lukas Nmecha. He will have vague hopes of a place in the World Cup squad and continued scoring in the Bundesliga as on Saturday against Köln will certainly aid his chances.

As ever there were only eleven spots available on the Team of the Week but more candidates impressing on matchday 5. In goal Oliver Baumann was decent against Dortmund as he kept the score down while Robin Zentner also did well to keep Mönchengladbach scoreless. Aarón Martin’s goal alone deserves a shout out, Mitchell Weiser impressed for Werder as did Christopher Lenz, Tuta (again) Waldemar Anton. Marco Reus and Julian Brandt had good games, while Randal Kolo Muani made everyone stand up and take note once again.

Bayern Munich have identified the right back berth as a squad position they are looking to strengthen this summer with back-up needed for Frenchman Benjamin Pavard. The recent injury suffered by the 24-year-old means that […]

Bundesliga Team of the Week Matchday 4

Yann Sommer  The Gladbach goalkeeper set a new Bundesliga goalkeeping record with 19 saves to deny Bayern Munich a win their attacking fervour probably deserved. Time after time Sommer pulled off a top save to […]