A fourth win from their opening five matches has put SC Freiburg top of the table ahead of the likes of Bayern Munich and Borussia Dortmund. Christian Streich’s side came away from the Bay Arena with a 3-2 win over Bayer Leverkusen in a very entertaining game.

Despite losing Roland Sallai early to injury and conceding the opening goal, the Breisgauer fought back at the start of the second period with an equaliser from Matthias Ginter and another goal for Michael Gregoritsch. A Ritsu Doan goal at the far post following a corner sealed the three points and top spot.

In typical Christian Streich style, the Freiburg coach played down being the top dogs in the Bundesliga. “Twelve points from five games means that things are going okay. So far, so good. We have still been the luckier ones in some games. In a season during which we’re competing in Europe, it is important to keep SC Freiburg in the Bundesliga.”

Werder got back to winning ways with a 2-0 away at Bochum, although they were made to work and made to wait to make the goalscoring breakthrough. After Philipp Hofmann had a goal ruled out, Niklas Füllkrug scored with a flying header from Mitchell Weiser’s cross on 87 minutes. Into injury time he coolly stroked home a penalty after Vassilis Lampropoulos fouled Oliver Burke.

The Werder striker now has five goals in as many games and is clearly enjoying life back in the Bundesliga. “I made it quite clear last week that we would have to be at our absolute limit and that’s what we did today. Everyone gave 100 percent this afternoon and tried to block every shot. I think that gave the game a different outlook compared to some of the others this season. We managed to keep the clean sheet and we were patient.”

Union emerged with a point from their top-of-the-table clash with Bayern Munich, but also with a burgeoning respect from those watching on. They may have ceded possession to the visitors and been forced to defend for large periods, but they did so superbly and even had chances at the end to snatch a sensational win.

They knew their work-rate and concentration was going to have to be at top levels, and the players didn’t disappoint- despite missing key men Jordan Pefok, Yannik Haberer, and defender Leite.

“Bayern were closer to victory, but all in all, we just showed a top game in terms of defensive performance” trainer Urs Fischer said after the match. “Even though Bayern had more than 70 percent possession, we were never passive. The team did a great job, we won the ball well in both halves but were sometimes too imprecise. In the end we deserved a point.”

It was a welcome return to Bundesliga action for Hertha Berlin’s Marco Richter just 55 days after being diagnosed with testicular cancer. Against his former club, the 24-year-old got on the scoresheet right at the end on the counterattack set up nicely by Davie Selke.

The Adler’s season is slowly coming together as they start to piece together some impressive results. Four goals last week at Werder Bremen were replicated with four more in a 4-0 home win over RB Leipzig.

The hosts were always in control of the game with Daichi Kamada pulling the strings in midfield, ably assisted by Mario Götze. Randal Kolo Muani was yet again a real handful for the Leipzig defenders and his unselfish assist set up the opening goal. Rafael Borré came on and scored from the penalty spot but could easily have added a fifth late on.

It was BVB’s second Friday night game of the season and although some fans might bemoan the lack of Saturday afternoon ritual, Edin Terzic knows that it is generally a good time for the Schwarzgelben to play. Having beaten Freiburg earlier in the season with a spectacular comeback, a more sedate 1-0 win was achieved against Hoffenheim this week.

CEO Oliver Mintzlaff described the first two games of the season as ‘a shitty start’ for RB Leipzig- what words must he have used to describe yesterday’s 4-0 mauling at the hands of Eintracht Frankfurt?

Trainer Domenico Tedesco is coming under increasing pressure and even he said his side were awful. “We completely missed the basics, weren’t even on the pitch in the first half. We weren’t aggressive at all. We lost the balls so quickly. We were terrible, a disaster.”

Two goals down at half time to a Frankfurt side (wo were admittedly playing very well), die Roten Bullen had no answer and limped in the end to a 4-0 defeat, which leaves them with just five points from five games and a whole heap of questions to answer.

Dortmund and Mönchengladbach are next up in the league with Champions League matches also getting underway next week. Those answers are going to need to be found quickly.

Freiburg may have beaten Leverkusen to go top of the table, but Hungarian Roland Sallai’s afternoon ended just five into the game. Whilst trying to head the ball he was caught full in the face by the boot of Jonathan Tah and was bleeding heavily. Stretchered off his afternoon was spent with medics trying to assess the damage to his eye.

“We hope it’s an eye bruise and nothing more” coach Christian Streich said after. “The doctor is optimistic; we don’t know for sure yet.” 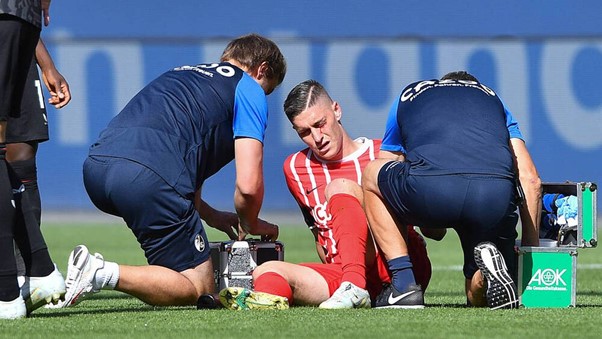 A fifth successive defeat means Bochum remain bottom of the Bundesliga table and pointless after five matches. Yet again there were positives to take from the game and Werder were made to wait for their goals. VAR denied Philipp Hofmann a goal in the 87th minute for a minimal (but correct) offside. Niklas Füllkrug then punished them with a header and a stoppage time penalty.

“It’s very, very bitter again” admitted coach Thomas Reis. “I saw a team that fought self-sacrificingly, was wide awake from the first minute. We did really well in the second half too. Then you score a goal that’s disallowed for handball that’s very annoying. Unfortunately, we’re without points again. Now we’re moving on, it won’t be easy to get the players up.”

In the end VfB Stuttgart were lucky to share the spoils with Schalke in their 1-1 draw after the Königsblauen had much the better of the second half. Being reduced to ten men didn’t help matters with Josh Vagnoman being sent off for two bookable offences. Cautioned in the first half for a verbal altercation involving Marius Bülter, he then blocked the run of Tobias Mohr with his shoulder on 67 minutes to earn a deserved second yellow. In the end the Swabians held out, but with thanks to Vagnoman.

Last week we weren’t talking about crisis, but another defeat for die Wölfe doesn’t do anything to ease the pressure on the team or trainer Nico Kovac. Conceding four goals at home is never good news but finding themselves second bottom makes the news even harder to swallow.

They face in-form Eintracht Frankfurt and Union Berlin next, so life doesn’t get any easier.

The curse of the dislocated shoulder struck at Borussia Dortmund again on Friday with Jamie Bynoe-Gittens the latest to go down with the injury. After a good first half against Hoffenheim he was forced off just before half time following a challenge with Ozan Kabak. After the match, the club confirmed the 18-year-old had in fact dislocated his shoulder. Club medics had managed to pop it back in during the match but recommended that the teenager not continue.

The same thing happened to Nico Schlotterbeck against Bayer Leverkusen on the opening day, while Mahmoud Dahoud is having to undergo surgery on his on-going shoulder problem.

It’s doubtful that Christian Streich will be making much of a fuss this weekend when two anniversaries converge. His 55th birthday on Thursday and his 250th Bundesliga game in charge of Freiburg are however worthy […]

Europa League/ Conference League Draw: What it Means for the German Clubs

A day after the Champions League draw was made in Istanbul and the Bundesliga’s five participants learnt their fate, it was the turn of the Europa and Conference League entrants to discover their opponents for […]

The Deep Dig: Edin Terzic’s Super Subs Save the Day

Borussia Dortmund came away from the Europa Park on Friday with a 3-1 away win over Freiburg to maintain their 100% start to the season. The simple score line however in no way reflects full […]