Matchday 8 from the 2. Bundesliga provided the usual thrills and spills both for those at the top and those struggling at the bottom. Paderborn maintained their top spot but are being closely pursued by Hamburg. The usual suspects meanwhile still occupy the bottom three places.

The weekend opened on Friday with Hamburg taking top spot in the table overnight, but only after an extremely nail biting and dramatic end to their match at Northern neighbours Holstein Kiel. HSV had stormed into a seemingly unassailable 3-0 lead with goals from Robert Glatzel, Moritz Heyer and Ludovit Reis. However, the home side staged a late fightback with two goals in injury time to make it quite the nervy affair for die Rothosen. An own goal from Heyer in the 92nd minute was followed by a Finn Bartels goal to set up a frantic finish.

Nürnberg dominated proceedings at home to Arminia Bielefeld but were frustrated throughout and it looked like their struggles to score were going to come back and haunt them again. Kwado Duah had a second half goal ruled out by VAR for a miniscule offside, but the breakthrough did come late on with a last-minute header from Lino Tempelmann. It was a just reward for der Klub and their coach Robert Klauß for a good overall performance. Bielefeld (relegated from the Bundesliga) drop into bottom three as a result.

HSV’s overnight stay at the league summit was brought to an end on Saturday lunchtime with Paderborn enjoying a 3-0 home in over Jahn Regensburg, who didn’t make life easy for themselves by having Steve Breitkreutz sent off midway through the second half and already 2-0 down. The other early kick-off saw Hannover’s four-match winning streak brought to an end by bottom side Eintracht Braunschweig in an atmospheric and feisty derby. The visitors took the lead in the second half via Anthony Ujah, but Havard Nielsen equalised ten minutes later after a superb bye line cutback from Cedric Teuchert.

Heidenheim remain third, but could have taken all three points from their trip to Karlsruher SC. In the end they had to settle for a goalless draw after seeing Tim Kleindienst’s second half goal ruled out for offside. Saturday evening saw Fortuna Düsseldorf enjoy a comfortable 3-1 home win over Hansa Rostock with Dawid Kownacki scoring an absolute screamer to open the night’s scoring. His fifth goal of the season was by far his best as he volleyed in from the edge of the penalty area with an xG of 0.07.

St. Pauli and FC Sandhausen shared a goal apiece to draw at the Millerntor, while an 87th minute from Moritz Kwarteng stole a point from Greuther Fürth after they thought they had secured a draw away at FC Magdeburg.

The final game of matchday eight was a real goal-fest at the Fritz Walter Stadion as Kaiserslautern and Darmstadt drew 3-3. A penalty from Tobias Kempe just before half time and a Phillip Tietz goal just after the break put the visitors in control. Kenny-Prince Redondo headed one back for the Red Devils on 74 minutes before they levelled via the penalty spot and the superbly named Mike Wunderlich. The hosts thought they had won it when Redondo headed in a second three minutes from time, but Darmstadt were not done and equalised in injury time through Aaron Seydel.

With eight games played Paderborn lead the table on 19 points with Hamburg hot on their heels on 18 points. The two sides relegated from the Bundesliga remain in the bottom three with promoted Eintracht Braunschweig also struggling. 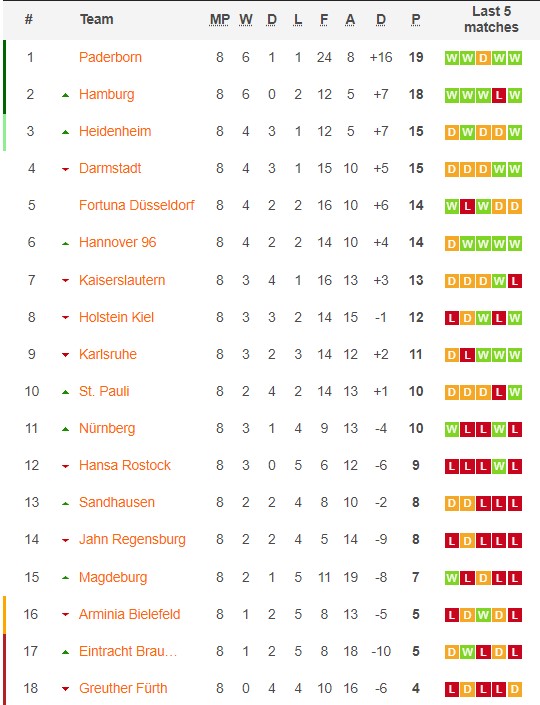 With the 2.Bundesliga now five games into the new season, its time to take a look at the runners and riders in Germany’s second tier and see how they are settling in. Who is inching […]

Hamburg and St. Pauli Both Look Good After Derby Draw

The Hamburg derby of Friday, 30th October 2020 was surely the weirdest Hamburg derby to date. Not only was it played in front of just 1,000 spectators, for obvious reasons, but both teams came out […]