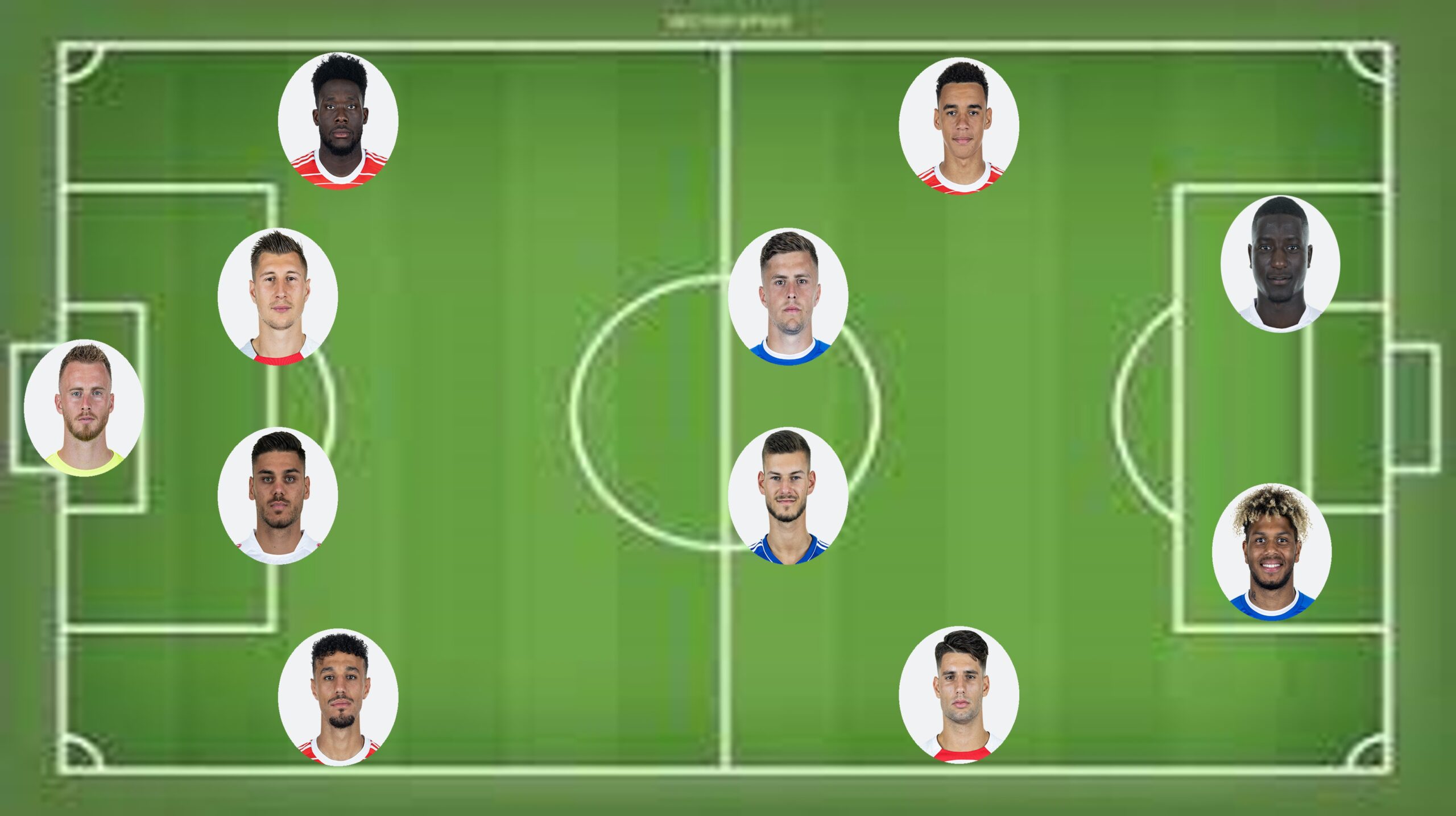 Freiburg’s clean sheet at home to Borussia Mönchengladbach in their 0-0 draw at the Europa Park Stadion on Sunday was down in large part to Flekken’s saves throughout. He may not always have known much about some of the saves, but he threw his body, arms, and legs at everything and managed to keep the ball out of the net. He might have taken inspiration from having Superkeeper Yann Sommer at the opposite end.

Davies marauding down the right at pace caused Stuttgart all sorts of problems and Borna Sosa certainly had a busy afternoon trying to contain him. He wasn’t contained for Bayern’s opening goal when his run and clever cutback allowed Mathys Tel to score and become the club’s youngest-ever Bundesliga scorer.

Like Davies, Mavropanos defended well when needed but was also an effective player bursting forward in possession and adding to the VfB attack. His powerful run set up Chris Führich for his equaliser.

It was like a different RB Leipzig on the field on Saturday compared to the side that buckled to both Eintracht Frankfurt and Shakhtar Donetsk recently. Defender Willi Orban led by example and showed great desire and determination to get his head to the ball for Leipzig’s opener. That goal set the tone for the overall performance.

“It’s important that we’re looking ahead positively now” Orban said after. “We tried a few tactical changes with the new head coach. The early lead played into our hands today and we stayed in control of the game. I was in a good position for my goal, and I headed it into a good position.”

Mazraoui was fast becoming the forgotten man at Bayern following his summer move from Ajax. A lack of game time and rumours that he was struggling to adapt meant that few remembered that he had signed.

With Julian Nagelsmann rotating his starting XI ahead of the Champions League clash with Barcelona, the 24-year-old Moroccan got a rare start and did himself the world of good with a very positive performance. It’s been a slow start, but you’ll be seeing a lot more of the fullback this season.

Schalke midfielder Tom Krauß was their stand-out player at the Veltins Arena as the Königsblauen notched up their first win against struggling Bochum. His work rate was excellent, he recovered the ball 14 times, won 11 ground duels, and made 6 tackles.

“We’re relieved to have won the game” he said post-match. “We finally got our first victory of the season together with our fans. This amazing support from the stands helped us recover from their equaliser.

“I think I got stuck in really well today, though I don’t want to speak too much about my own performance. The team is always the most important thing – and we played really well as a team. I’ll enjoy the win and then we’ll turn our full focus to the derby!”

It was a good team performance that helped Hoffenheim to a 4-1 win over Mainz, but it seemed that everything good about them going forward seemed to involved Baumgartner along the way. He directly assisted the second goal and started the move that led to another. He is fast becoming the key creative element in the TSG side.

The Hungarian deserves his place in the Team of the Week based solely on the quality of his goal that he thundered past Alexander Meyer, but his all-round performance was noteworthy. Playing on the right of the three behind Timo Werner he moved centrally when it was right and enjoyed a fine game under new coach Marco Rose. The two of them know each other from their days in Salzburg, so a good relationship could be about to be rekindled after Szoboszlai found himself out of favour a little under Domenico Tedesco.

The youngster is just a pure joy to watch. The Allianz Arena audibly holds its breath whenever he gets the ball in an advanced position. His goal was taken with exquisite technique, and he bothered the Stuttgart defence throughout. Julian Nagelsmann rotated for the first time on Saturday but will struggle to leave Musiala out of any line-up based on his current form.

He may not have got on the scoresheet against Mainz, but Georgino Rutter’s pace, directness, twinkle toes and delivery caused the visitors no end of trouble. Alexander Hack had no answer to his pace just before the interval and resorted to pulling him down for a penalty. Rutter, like Baumgartner is fast becoming an indispensable part of the Hoffenheim unit that is mixing with the likes of Bayern at the top of the table.

Sasa-who? Guirassy kept his cool at the end of the Bayern game when all the pressure was on him to save a point for VfB Stuttgart and deny the Bavarians a win they may have presumed. He converted emphatically from the penalty spot after winning the spot kick himself. He had earlier seen a goal harshly ruled out for a foul on Joshua Kimmich in the move and hit the crossbar with a curling effort that had Manuel Neuer beaten all ends up.

As ever there were only eleven spots available on the Team of the Week but more candidates impressing on matchday 6. In goal Rafal Gikiewicz’s penalty save, and overall performance was worthy, but his antics at the end spoilt things. Maxence Lacroix scored a vital goal for Wolfsburg, while workhorse Grischa Prömel added a goal to his repertoire. Kerem Demirbay played well and produced a gem of a freekick, and Dominik Drexler also deserves a mention at Schalke. Mathys Tel had a debut at Bayern to remember.

The decision to part company with coach Alfred Schreuder four games before the end of the season could have back-fired in a big way, but fortunately for Hoffenheim, they were able to steer themselves to […]

Georginio Rutter: In the Hoffenheim Footsteps of Firmino

Last season Georginio Rutter was a rising star at Hoffenheim, but this season he has simply risen to be a star for Sinsheim club and one of the Bundesliga’s stand-out performers. His exciting style and […]