The 50th Bundesliga Revierderby at the Signal Iduna Park is upon us this weekend and after fans were omitted from the last two encounters, this weekend’s clash is being eagerly anticipated and will take place in front of a sold-out stadium.

Borussia Dortmund are favourites despite their abysmal display last weekend at RB Leipzig. It was a lethargic display that deserved the criticism that came their way, The did however produce a much-improved performance in midweek (particularly defensively) against Manchester City in the Champions League. Erling Haaland predictably won the game for the Premier League side, but there were plenty of positives for BVB to take from the game.

Being able to get back up and ready for such an important domestic game with just two days in between will be a challenge for the Schwarzgelben, but if you can’t get up for the Revierderby you have an issue.

Schalke won their first three points of the season last week against another Ruhr side Bochum, but the challenge posed by Dortmund will be of a different magnitude. BVB have won the last three derbies and it has been 50 years since they won four, so the Königsblauen will want to stop their opponents matching that record. 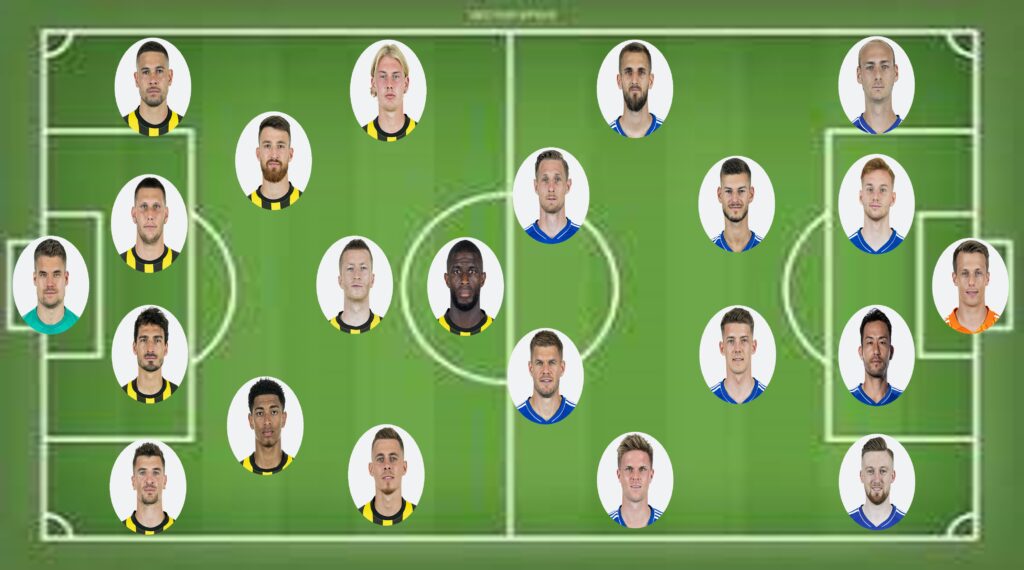 Gregor Köbel, Mahmoud Dahoud, Mateu Morey and Jamie Bynoe-Gittens remain unavailable to Edin Terzic. Karim Adeyemi and Donyell Malen are however fit to be selected, while it is quite foreseeable that Gio Reyna could start in place of Thorgan Hazard or even Julian Brandt. Niklas Süle could drop to the bench if Nico Schlotterbeck has fully recovered from his back strain.

Schalke trainer Frank Kramer has Kaminski unavailable, while a muscle injury could keep out Cedric Brunner. Henning Matriciani is set to deputise at right back. It could be that Kramer goes with just Simon Terodde up front by himself in order to add an extra midfielder- either Rodrigo Zalazar or Jordan Larsson.

Edin Terzic (BVB coach): “We know what significance the derby carries for our fans and for the region. We’re aware of the responsibility. The derby is the most important match. We know that we need to win the game. But we also want to win the game. That would mean we’ve established ourselves towards the top.

“Schalke played very intensively and very aggressively, especially with regards to winning the ball back in the centre. Then they go forward quickly on the counter. They play very effective football. Within a few passes they try to play it into the forward line.

“We did a lot of things in the game in Manchester that have left us feeling optimistic. If we go about every task with this energy, which we showed on the pitch from the first second, we will play successful football. The way in which we supported each other, this energy – if we can replicate that every three days, we’ll be able to play very good and successful football.”

Sebastian Kehl (BVB sporting director): “Schalke will pull out all the stops. This match is always very special. It doesn’t matter whether one team is at the top and the other is at the bottom. Both teams will give everything in this match, Schalke will make that clear to us. They will come to our stadium full of ambition, but we still need to win this game.”

Frank Kramer (S04 coach): “What matters is that we are totally focused on the game. We want to absorb this emotion and convert it into positive energy on the pitch. We will also need this positive energy to play well against a strong opponent.

“Of course, we know that Dortmund will try to use their fast and agile players. That’s why we have to counter it powerfully and aggressively in the centre. And we have to look for our own chances and show a lot of willingness. We will need everything: passion, the ability to suffer, and determination.

“We don’t see this game as routine, we’re really looking forward to the derby and want to rock it.”

Rouven Schroder (S04 sporting director): “Our overall performance will be decisive. We need to be confident and brave, and we’re hoping to go home with a positive result. We’ve earned the chance to play the derby after working hard for a whole year. We can’t wait for it now.

“We all know that Dortmund are a Champions League side and they’ve been on an incredible journey. It’s therefore a derby where one side is perhaps a bit stronger than the other, but we’ll gladly take on the challenge.”

The Winners & Losers of Bundesliga Matchday 30

Matchday 30 continued to bring all the ups and downs we expect from the Bundesliga with record goal scoring exploits from old heads and up and coming stars. Those at the top of the table […]

The final fixture on matchday 8 this weekend pits Bayern-conquerors FC Augsburg against Schalke at the Veltins Arena. The Fuggerstädter grabbed all the headlines on matchday 7 with their shock 1-0 win over Bavarian rivals […]

Adeyemi and Malen Need to Deliver More for Borussia Dortmund

Like a midwife with a waiting room full of heavily pregnant women, Borussia Dortmund’s Donyell Malen and Karim Adeyemi simply have to deliver more. There are a number of areas in need of improvement this […]