The much-anticipated return of the Revierderby in front of a packed Signal Iduna Park didn’t fail to entertain with hosts Borussia Dortmund ultimately emerging triumphant thanks to a second half header from substitute Youssoufa Moukoko.

Schalke defended throughout but were ultimately undone by BVB youngster. A fantastic result for the Schwarzgelben, marred only by a horrible-looking injury to Marco Reus. Here we look at five takeaways from Saturday’s derby action.

1. Moukoko needs to start in place of Modeste

How much longer are Borussia Dortmund going to prolong picking the largely ineffectual Anthony Modeste to lead their attacking line? The loss of Erling Haaland was planned to be compensated by the signing of Sebastien Haller from Ajax, but his testicular cancer diagnosis meant a plan B was required.

The wisdom of signing Anthony Modest was questioned by some at the time, but as the games go by, there are more questions being raised as to whether there isn’t another option. Today, against Schalke, Youssoufa Moukoko showed that perhaps there is.

Moukoko came on in the second half after another lacklustre display from the former Köln striker and he ended up as the match-winner doing what Modeste couldn’t and getting his head to a cross to score. The goal makes the teenager the youngest-ever scorer in a Revierderby at 17 years 9 months and 28 days. The goal also ups the pressure to drop Modeste to the bench and give Moukoko a chance to start.

2. Reus’ injury is a real concern

The fourth Revierderby win for BVB in a row will be celebrated long into the night and probably into Sunday as well, but any celebrations will be tempered by the injury picked up by captain Marco Reus in the first half.

64 days before the start of the World Cup is not the ideal time to be stretchered off the field and judging by the agonised reaction of the player, this could be a serious injury. He twisted his ankle after an innocuous challenge for the ball, but the early signs do not look good for the BVB talisman.

The injury is a concern for Dortmund, but also for Bundestrainer Hansi Flick, who had named Reus in his squad to face Hungary and England next week, and who surely planned to take to the World Cup in Qatar. 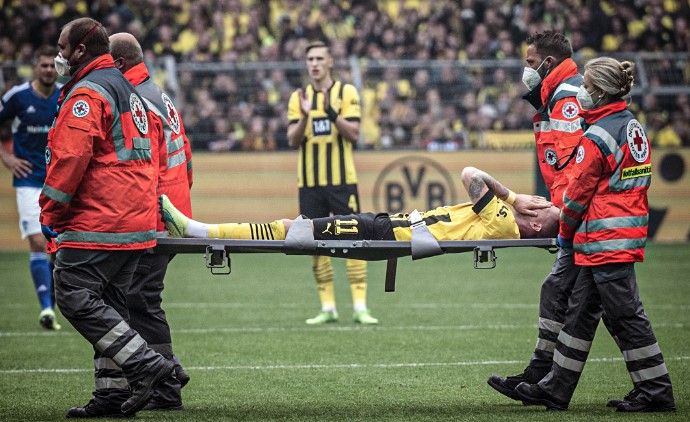 Despite ultimately leaving empty handed, Schalke should be highly commended for their overall defensive display, which looked like it was going to frustrate Dortmund and give them a share of the points. If Frank Kramer sent his side out to gain a goalless draw, the performance very nearly warranted it.

The Königsblauen were very quick in their defensive transition whenever they did venture forward, were superbly organised by the veteran Maya Yoshida, and ably abetted by the Dutch youngster Sepp van den Berg. They were compact, made the space tight in the centre and conceded space out wide (particularly to Thomas Meunier).

From a defensive point of view, only the Moukoko goal blotted an almost perfect display of how to keep an opponent scoreless.

4. The atmosphere at the Signal Iduna was electric

After two years of no derby and with the last two being played with no/ or very few fans due to Covid restrictions, the return to a full stadium was so welcome. The atmosphere was rocking from before kick-off and the decibel level hardly dropped from minute one to the final whistle.

The visiting Schalke fans played their part in a hugely atmospheric game that showcased the very heart and soul of German football. This was Bundesliga atmosphere at it’s purest and best. 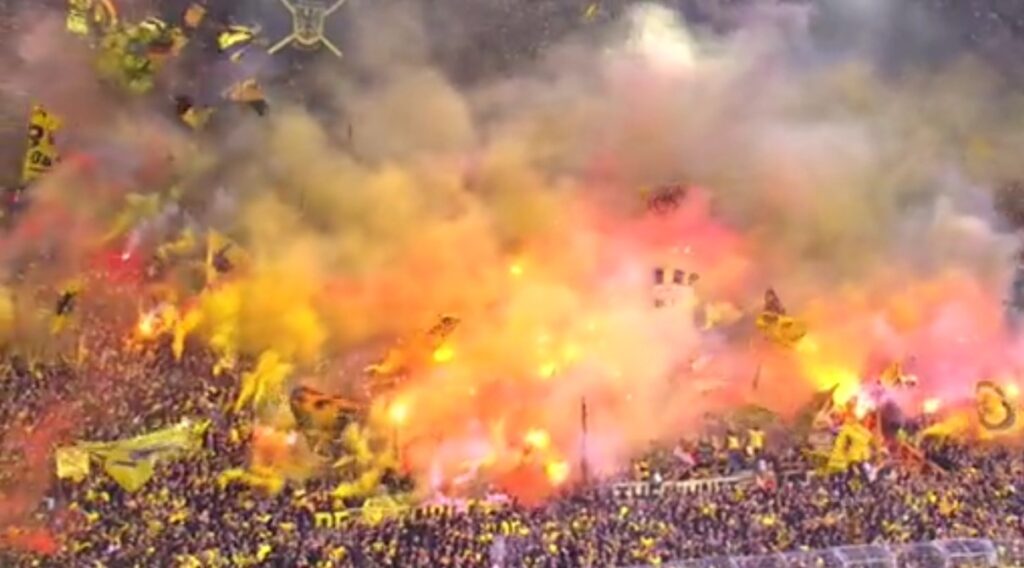 5. Donyell Malen’s return was a triumph

Youssoufa Moukoko will grab the headlines with his match-winning goal, but the Man of the Match award belongs to Donyell Malen, whose return to fitness following injury will be highly welcomed.

His pace, direct running, and ability to take on defenders was on display from the very start as he made his intentions clear. Dortmund have been a little pedestrian in recent weeks in terms of attacking prowess, but Malen instantly injected a level of urgency and speed that had previously been lacking. A top display and a welcome return.

Edin Terzic: A Question of ‘When’ Not ‘If’ Dortmund Will be Champions

Borussia Dortmund coach Edin Terzic wears two hats as the trainer of the Schwarzgelben. One puts him in charge of the team and tactics, while the other puts him firmly in the role of fan […]