Matchday 9 from the 2. Bundesliga provided the usual thrills and spills both for those at the top and those struggling at the bottom. Hamburg took over at the top of table from Paderborn, who lost at bottom side Fürth. Hannover returned to winning ways, while Hansa Rostock ended their losing streak

The weekend opened on Friday with Hannover getting back to winning ways with in an entertaining 3-2 away at Sandhausen. Last week’s derby draw against Eintracht Braunschweig brought to an end a four-match winning streak, but at the BWT-Stadion they outscored their opponents by one in a goal-filled encounter. The visitors opened the scoring through Cedric Teuchert in the 14th minute before David Kinsombi levelled from the penalty spot ten minutes into the second half. Havard Nielsen restored their lead with a header and Japanese wingback Sei Muroya added a third. The home were given hope when Bashkim Adjini headed in a reply, but Hannover held out for the win.

Eintracht Braunschweig climbed out of the bottom two with a 2-1 victory at home to Karlsruhe. Two goals from Anthony Ujah both assisted by Immanuel Pherai gave the struggling side their second home win on the trot and saw them leave the bottom two places.

On Saturday, Arminia Bielefeld gained a morale-boosting win over Holstein Kiel that took them out of the bottom three in the table. The game started in lightning fashion with Robin Hack scoring after just 18 seconds! It took VAR considerably longer to verify the goal, but it stood. A second arrived on 36 minutes when Janni Serra headed in from Hack’s delivery. There was another quick start to the second period although it took a full three minutes for midfielder Masaya Okugawa to score the third. Die Arminen then made things a little nervous for their fans by conceding two goals, but the result was put beyond doubt when Bryan Lasme scored their fourth five minutes from time.

SV Darmstadt maintained touching distance with those at the top with a comfortable 2-0 home win over a largely harmless Nürnberg. First half goals from Tobias Kempe and Phillip Tietz secured the points. The fans went home happy even if no-one managed to get a player’s shirt as a souvenir. Hansa Rostock brought a three-match losing run to an end with a 3-1 home win over Magdeburg. Two goals from Kai Pröger set them up before Lukas Fröde added a third. A late goal from Baris Atik was a mere consolation and couldn’t stop them moving to the bottom of the table.

The Saturday evening fixture then saw Hamburger SV take over at the top of the table with a 2-0 win over Fortuna Düsseldorf and ex-trainer Daniel Thioune. A first half goal from Robert Glatzel was added to late on when Bakery Jatta headed home in the 90th minute.

There was a shick on Sunday as bottom side Greuther Fürth chalked up their first win of the season with a 2-1 home win over SC Paderborn, which stopped them returning to the top of the table. Damian Michalski headed in for the home side three minutes before the interval only for Dennis Srbeny to equalise four minutes after the break. Branimir Hrgota proved to be the Fürth matchwinner firing in a left-foot shot with 15 minutes remaining.

FC Heidenheim and Kaiserslautern remain in the chasing pack after a 2-2 at the Voith Arena on Sunday afternoon. Niklas Beste scored for the home side after 17 minutes, but the lead lasted just three minutes with Terrence Boyd heading in the equaliser. The Red Devils then had keeper Andreas Luthe sent off minutes before half-time for a professional foul on Beste outside his penalty area. After a VAR delay Marnon Busch curled home the resulting free kick to restore the lead. Despite being a man down, Kaiserslautern looked the better side and Boyd made it 2-2 on the hour mark. In the end the visitors deserved their point following a great second half display.

The final match of the weekend saw Jahn Regensburg beat St. Pauli 2-0 with Andreas Albers scoring both of their goals to leapfrog the Hamburg team in the table. 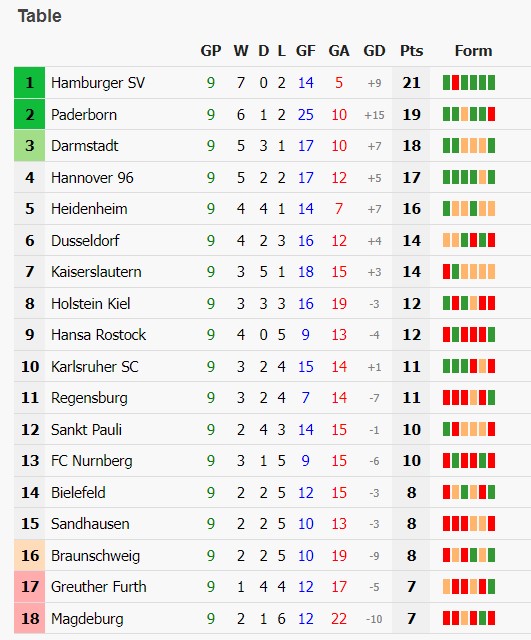 The 2. Bundesliga Team of the Season

Unsurprisingly champions Arminia Bielefeld contribute the majority of players towards the second tier’s team of the season, but talent from elsewhere in the league is recognised. Here are the best performers from yet another fascinating […]

Its incredible to think we are already approaching the halfway stage of the 2022-23 season with a very interesting narrative developing in the second tier. The battle for the top two is intensifying and the […]

Despite the stakes their proverbial ¨six-point match” Saturday, neither Fortuna Düsseldorf nor SC Paderborn were able to find the goal, forcing both relegation-threatened clubs to settle for a single point from a scoreless draw. The result […]