The ecstasy of winning the Revierderby against rivals Schalke was tempered at Borussia Dortmund by the agony suffered by captain Marco Reus as he was stretchered off in the first half. With just 64 days until the start of the World Cup, there is an ominous feeling of déjà vu for the BVB skipper.

Rewind to 2014 and Reus was cruelly ruled out of the World Cup in Brazil after suffering a partial ligament tear in his left ankle during a pre-tournament friendly against Armenia. He had been intended to be a key part of Joachim Löw’s squad and the heartbreak was made all the worse when Germany went on to lift the trophy. Reus was also left out of the 2016 European Championships squad with a groin injury causing doubts as to the wisdom of selecting him. 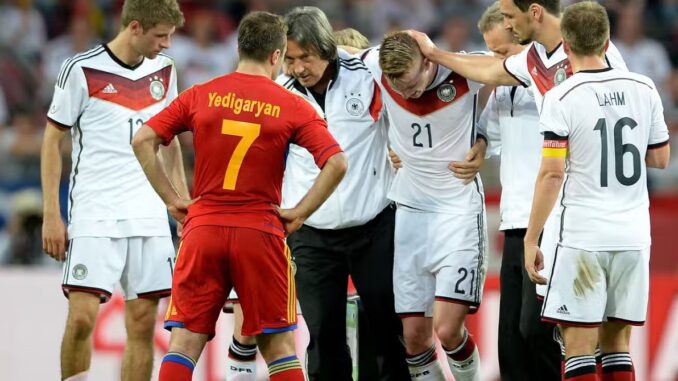 At the Signal Iduna Park on Saturday, it all went wrong for Reus in the 28th minute after an innocuous looking challenge with Schalke’s Florian Flick. TV replays however showed Reus’ ankle twisting badly on landing and his reaction clearly showed the pain he was in.

Ligament strains and torn ligaments are amongst the most common injuries suffered by players in this situation and the average recovery time is between six to eight weeks. Ligament injuries in the ankle area can also lead to further damage, such as a tear in the syndesmosis ligament.

BVB are not saying how serious, or indeed what the injury is, but it is clear that Reus will not feature now against either Hungary or England next week. “There is no one I talk to more often than our team doctor at the moment” Edin Terzic said after the match. “Today it hit our captain. It is extremely bitter, it was extremely unfortunate. Marco injured his ankle. I was only able to speak to him briefly at half-time and he was in severe pain.

“How badly the ligaments are injured, we can’t answer yet. It’s a shame because Marco was in excellent form, he was in great shape and played great. He has experienced so many setbacks in his career; we had hoped that he would finally be through with it, especially now in the World Cup year. We hope it’s not as serious as it looked.”

It would be mightily cruel blow for Reus should the injury turn out to be serious enough to put his World Cup hopes in jeopardy. Having missed out before, the Bundesliga legend deserves the chance to appear on football’s largest stage. Fate however, might have different ideas.

It cannot be said that Borussia Dortmund aren’t prepared to give youth a chance. Jadon Sancho and Erling Haaland are already both key members of Lucien Favre’s side, while the Swiss coach was also keen […]

Can Hertha Berlin go top of the table? Three points for Hertha Berlin at home to Eintracht Frankfurt would see them ensconced at the top of the Bundesliga table for a few hours at least, […]